Western countries have historically had a strong hand in the African continent and feel uncomfortable against not only Chinese multiple investment projects, but also its political influence in almost every corner of the continent. 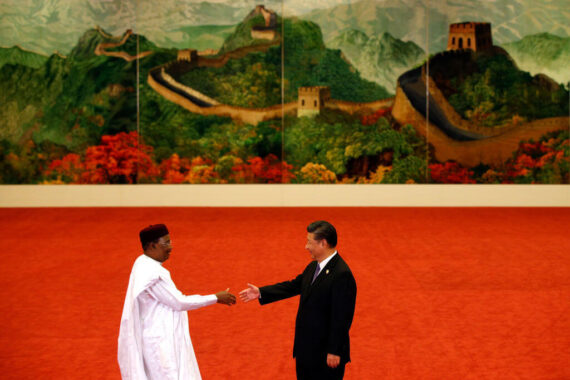 Niger President Mahamadou Issoufou, left, shakes hands with Chinese President Xi Jinping during the Forum on China-Africa Cooperation held at the Great Hall of the People on September 3, 2018 in Beijing, China. Getty Images

The presence of China in Africa, in the last few decades in particular, through the injection of billions of dollars, has attracted attention. China’s bilateral relations with various African countries have been noticeably increasing since 2000.

The role of China in Africa seems to show confidence in its global entrepreneurship capability through its economic and investment aptitude. In fact, the investment policy of the Chinese government does not have any covert issues. Rather, it is quite understandable as to why Chinese state companies have had heavy investment projects collaborating with respective African state agencies.

What is striking in the multi-faceted investment projects and facilitation attempts by the Chinese government is that these investments are administered through loans, human resource utilization and of course, bilateral treaties with respective countries. In addition, the Chinese business people have mobilized their investment capacity and capability either independently or with the help of the government.

Chinese President Xi Jinping has played a prominent role in this regard throughout his presidency, including the expansion of investment policy in outer spheres reaching district parts of the world, including the continent of Africa.

The issue at hand at hand is a popular phenomenon debated globally because of Beijing’s record being the second biggest economic capital in the world.

It is quite logical to think that this process is making China an emerging force and a new modernizing actor in Africa with its deviant capitalist perspective, say, mainly the approach through state companies. No doubt that this is a novel phenomenon in terms of the modernization process of African states. In addition, this process is making China’s political and economic ideology closer to that of the West.

While China is aggressively pushing forward its hard power, it lacks significant soft power such as cultural business and cultural aspects similar to those compared with the African nations. This in itself is a handicap for the Chinese government.

The Chinese attempt at modernization is not based on establishment of dialogue with African governments and societies in the fields of social and cultural diffusion. Rather, it is similar to the development of the economic power structure consistent for the last four decades in the advancement of technology and capitalization of production systems in China. This process is precisely why this is a very novel phenomenon.

It is not an exaggeration to enquire about the ideological basis of the Chinese modernization processes in the continent, since there have not been significant relationships between China and Africa in the course of history.

While China is aggressively pushing forward its hard power, it lacks significant soft power such as business and cultural aspects. This is, in itself, a handicap for the Chinese government.

Catering to the needs of capital, infrastructure, and expertise of the African nation-states was on the agenda of developed countries throughout the 20th century. With regard to this, one cannot ignore that almost the whole continent has had success stories commencing from the post-war modernization process, implemented in a hierarchical manner through international organizations such as the World Bank, various development agencies of the UN, and some individual Western countries.

This demonstrates that African countries have not shown considerable self-satisfying development processes, with the exception of certain but limited capitalist environments supported by international companies.

Bilateral agreements between Chinese companies and specific countries that are gifted with geo-strategic positions and crucial raw material sources allows the former to maximize its economic and political earnings. While this process is carried out through monopoly relationships, in particular, in the field of energy and transport between China and African states, China emulates the centuries-old approaches of the Western power bloc.

While China has taken over the role of the Western states in recent decades, which is definitely a concern for Western countries, tensions seems to emerge as the result of initiating major investment opportunities in the continent, with the purpose of dissemination of Chinese version of modernization.

This process precisely proves that China has been working to reverse power relationships between African countries and the West through these massive processes of capital flow, technology transfer and mobilization of human resources to the continent.

Notwithstanding, the latter has observed with growing suspicion Chinese economic and probably political hegemony attempts in the continent, replacing the West post-colonial legacy. Western countries have historically had a strong hand in the African continent and feel uncomfortable against not only Chinese multiple investment projects, but also its political influences in almost every significant corner of the continent.

In addition, there is still a major concern about China’s massive engagement in the African continent among scholars and experts. Whether the Chinese attempt has really served towards the liberation of African nation from Western developmental traps or not is really a matter for thought and contemplation.

Though this might have been predicted in the early stage of Chinese advancement in the economy, today it has already been perceived as a threat to the sovereignty of the affected African nations.

Whereas the global public is carefully observing the major engagement of China in its investment-oriented affairs, the role and stand of the U.S., in particular, since 2016 should not be made light of in this development. In particular, the Trump administration has significantly retreated from global affairs, including the African continent, by focusing on domestic economic recovery in the framework of the ‘America first’ motto.

China has taken over the role of the Western states in Africa in recent decades, but there is a tension accompanying the major investments: Does this process also mean a dissemination of Chinese version of modernization?

The novel positioning of the current U.S. government has implicitly helped – to an extent – the Chinese government’s aggressive engagement in bilateral relationships in an increasingly widening space in the African continent. In regard to this, one can assert that the presence of China in Africa is considered in one way or another as the reverberation of its aggressive expansion in the South China Sea territory.

Hence, it can be asserted critically that the so-called global powers do not differ from each other in their major involvements of appropriating local, regional and natural resources. But some differences emerge in the forms and implementations of almost similar policies. Since the nature of the economic development of China is not separated significantly, at least to some extent, from Western capitalism, this process has been driving Chinese governments to maximize the existing production system.

Although Chinese-Africa development stages are gaining positive feedback among the respective African countries’ national elites, the possibility of various types of conflict cannot be underestimated. For instance, the socio-cultural differences between Chinese and diverse African societies, the real and hidden purposes of China, different expectations of the relevant parties are some of the crucial factors in this matter.

What the implications will be of China’s existence based on major economic investments is still an issue that needs to be worked out by considering distinct aspects of the relationships built.

It is also quite interesting to think about the reflection of Chinese investments in each respective African nation. Though the African nations desperately need to advance in post modernization, this does not necessarily mean that all the political establishments and general public are advocating the process wholeheartedly. This may cause crisis and conflicts in the specific nations and probably would occur in whole continent against the Chinese encroachment.