Does the fray over European security between the U.S. and the EU demonstrate a return of Europe to great power politics? 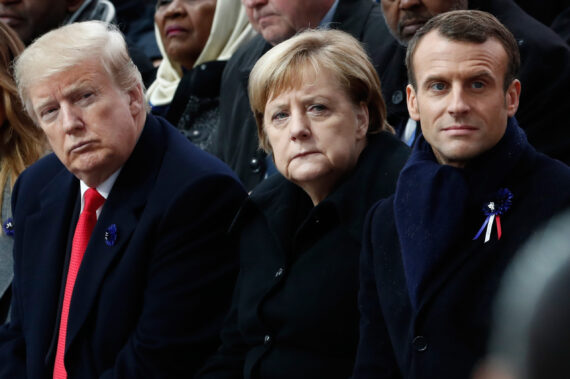 (From L) US President Donald Trump, German Chancellor Angela Merkel and French President Emmanuel Macron attend a ceremony at the Arc de Triomphe in Paris on November 11, 2018 as part of commemorations marking the 100th anniversary of the 11 November 1918 armistice, ending World War I. Getty Images

Last week during the WWI commemoration ceremonies, U.S. President Donald Trump and French President Emmanuel Macron had a quarrel over how to sustain European security. President Trump has been pressing very heavily on European leaders to increase their share in NATO, forcing them to follow the U.S. sanctions leveled against Iran and Russia, threatening to enforce additional tariffs on European products, mainly those pertain to the automobile industry. Germany and France, the two pillars of the emerging European super-state, have grown uneasy about unilateralism and the peremptory attitude of Trump’s foreign policy. However, they have showed no sign of aversion.

This has changed with Macron’s recent call for building up a European army to protect Europe in the face of growing Russian, Chinese and also the U.S. threat. This implied a new security framework for Europe outside of NATO. Macron’s call for an independent security framework was hastily backed by Germany. This snap has, of course, drawn Trump’s fury that he did not miss the opportunity to ridicule France by expressing that the U.S. saved France from Germany’s hand in WWI. Trump was obviously implying that if the U.S. gave up its role of European balancer, history would repeat itself. That is, Germany might invade the neighboring countries and establish its hegemony over the whole of Europe once again. Besides, he reiterated that the U.S. did not have an intention to renounce its role of European balancer or dissolve NATO but the U.S. needed the European countries to take more responsibility for maintaining security of the Western world.

U.S. President Trump didn’t miss the opportunity to ridicule France after Macron’s call for an independent security framework within the EU and said that the U.S. saved France from Germany’s hand in WWI.

Does this fray over European security between the U.S. and the European central powers demonstrate another challenge against the existing unipolar international order? And does it amount to a return of Europe to great power politics?

Does the fray over European security between the U.S. and the EU demonstrate a return of Europe to great power politics?

In the new format, international politics was determined by the U.S.’s perpetual attempts to prevent an emergence of another regional hegemon in other regions by following a strategy of offshore balancing. This strategy mainly comprises taking the side of the lesser power(s) in a region and thus to forestall integration of a region under a hegemon. This was clearly observed in WWI and WWII. In the former the U.S. attempted to prevent German hegemony in Europe whereas in the latter it sought to preclude German hegemony in Europe and Japanese hegemony in East Asia. The U.S. succeeded in both of those systemic wars.

However, the U.S.’s success backfired. It led to a power vacuum in Eurasia and gave way to the rise of another regional hegemon, the USSR. The Cold War witnessed an international system with two hegemons with their own spheres of influence. Europe was split between the U.S. and the USSR and became a dominated region. The end of the Cold War has not changed the status of Europe so much. But it has furthered European unification, which had started in the mid-1950s with the American support.

European leaders see Trump’s unilateral and domineering foreign policy as an opportunity to upgrade Europe’s status in international politics to a higher level.

Now we are at another stage in European integration and its return to international politics as a great power. No power in international politics desires to leave its national security to the hands of another state unless it has no other choice. Thus, French President Macron’s call for a European army and Germany’s backing cannot be thought as a bluff against the U.S. Nor can it be understood from a scapegoat approach, that states tend to start or escalate conflicts in outside their borders to sustain unity within the country. It seems that European leaders see Trump’s unilateral and domineering foreign policy as an opportunity to upgrade Europe’s status in international politics to a higher level. It is completely a different matter that whether they can achieve that goal or not, the intention is clear – Europe is on its way to smash another brick in existing unipolar international order, alongside Chinese and Russian challenges to the U.S.