The two decisions of the U.S. administration – recognizing the Golan Heights as Israeli territory and the decision to move the U.S. embassy from Tel Aviv to Jerusalem – indicate that the Netanyahu and Trump administrations are forcing the limits of a regional war in the Middle East. 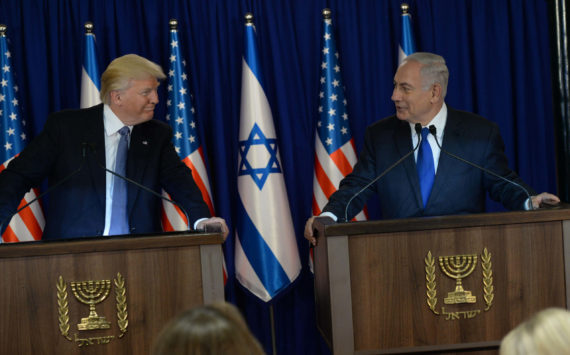 The two decisions of the U.S. administration – recognizing the Golan Heights as Israeli territory and the decision to move the U.S. embassy from Tel Aviv to Jerusalem – indicate that the Netanyahu and Trump administrations are forcing the limits of a regional war in the Middle East, which would have devastating consequences for all across the globe.

Although the mainstream media interpreted these decisions as an election ‘gift’ from Trump to Netanyahu, the decisions seem to go beyond a simple support for the latter’s re-election. Speaking to The New Turkey, Associate Editor of The Electronic Intifada Asa Winstanley argued that these two internationally illegal decisions of Trump were not just direct gifts to Netanyahu, but in the first place, a favor to his close friend and the main financial backer of his campaign, Sheldon Adelson, a billionaire casino owner in the U.S.

Trump wanted to make not only Netanyahu happy but also Sheldon Adelson, a billionaire casino owner in the U.S., Trump’s close friend and the main financial backer of his campaign.

Winstanley describes Adelson as one of the main funders of the Israeli lobby in the U.S. and an individual who is on the far-right of that lobby. He has close relations with Trump and therefore the President is making Adelson happy as a way of paying off his generous donations to Trump’s presidential campaigns.

Speaking to The New Turkey, Haydar Oruc, researcher at Sakarya University Middle East Institute, argues that considering the previous decisions made by Trump in support of the State of Israel since the beginning of his presidency, the Golan Heights and Jerusalem decisions should not come as a surprise.

As one of the important promises of his presidency, Trump has been talking about solving the Palestine-Israel conflict with the ‘deal of the century,’ conducted by his son-in-law and chief-advisor Jared Kushner. Trump has appointed David Freeman, a right-wing Jewish American outside of the Foreign Office, and a supporter of the Israeli settlements, as the Ambassador to Israel.

For years, the U.S. administration has approved and conducted practices proposed by the Israel administration and has further isolated the Palestinians in the international community. Cutting the UNRWA fund for Palestine, closing the Palestinian authority office in Washington, forcing Arab regimes in the region to cooperate with Israel, putting pressure on the International Criminal Court in order to prevent Israel from trial, and rejecting decisions against Israel at the UN Security Council are just some examples of U.S. behavior before recognizing the Golan Heights as Israeli territory.

Haydar Oruc recalls the remarks of Israeli politicians during the opening ceremony of the U.S. embassy in Jerusalem, who described Trump as the Persian Emperor Cyrus and blessed him for bringing Jews to the promised lands after 2000 years. Both some Jewish and Evangelical figures described these events and the presidency of Trump as ‘miracles’ promised in their holly book. Oruc added that although it is difficult to believe, what is happening at the moment is merely attempts of some fanciful Jewish-Evangelical Zionists in parallel with their beliefs.

The strong support that the Israeli government provides for Trump is not coincidental when one considers the actions of previous administrations in Washington. During the last period of the Obama administration, an anti-Saudi approach had been followed. First, the nuclear agreement was signed with Iran and then a U.S. court decided to freeze Saudi accounts in the U.S. due to possible connections with the 9/11 attacks. When the U.S. administration under Obama made moves to pave the way for Iran, there were rumors of U.S. pressure on a regime change in Saudi Arabia.

This approach not only troubled Saudi Arabia but the pro-Iran approach also caused distress within the Israeli administration. Thus, Trump’s presidential campaign received rigorous funds from individuals in Israel and the Gulf – which is why he made official visits to these two regions after he got elected as U.S. President.

Haydar Oruc recalls the ‘glowing orb’ incident at the opening ceremony of the Global Center for Combating Extremist Ideology during Trump’s first foreign visit as the President of the U.S. in Saudi Arabia. A couple of days after the picture with Trump, Saudi King and Sisi around the orb, the Gulf Crisis kicked off, and the UAE, Saudi Arabia, Egypt, and Bahrain began implementing isolationist policies against Qatar. This regional Arab bloc in the south that has been crystalized since the beginning of the crisis has not merely been established only against Qatar. The south Arab bloc consolidated by the U.S. and Israel is against another bloc on the north, which consists of Iran, Qatar, and Turkey.

Zionists have been using the motto ‘maximum land, minimum Arabs’ since the establishment of the State of Israel.

Can these developments and the fateful alliance between the current U.S. evangelical administration and Zionist Israel lead to a regional war? Asa Winstanley believes that a regional war is unlikely to occur in the future, however, adds that one can never count out the possibility. According to him, Zionists have been using the motto ‘maximum land, minimum Arabs’ since the establishment of the State of Israel. Therefore, the annexation of the Golan Heights, declaring Jerusalem as the capital of Israel and the future plan of annexing the West Bank should be seen as other examples of this strategy.

Haydar Oruc claims that in order to comment on a possible regional war it is first necessary to analyze whether or not global powers would directly get involved in such a war. Otherwise, it is not realistic to expect Israel – despite being a nuclear power – together with the south bloc of Arab regimes to counteract Iran. And if you add Turkey next to Iran, the task becomes almost impossible. Since the beginning of the Arab Spring in 2010, the civil wars that erupted in Syria, Yemen, and Libya, together with the tensions in Iraq, Lebanon, Algeria, Egypt, Sudan, and Palestine, are all signs of an on-going covert war in the region.

Independent from this turmoil in the region, it is unlikely for the south-bloc Arab regimes and Israel alone to attack Iran or any other target directly. Instead of a military offense, embargoes supported by the U.S., political pressure, and attempts of regime change through popular uprisings in target countries seem like more convenient tactics to utilize. However, Haydar Oruc adds that in the case of the involvement of global powers in the process, it is more likely to see conflicts in the region whether or not you call it regional war in the traditional sense.

The scrupulousness of Israeli and American political actors is the source of the ongoing illegalities and any possible armed conflict in the region.

Asa Winstanley describes the ultimate goal of Israel as maximum land with minimum Arab population. He adds that they are pursuing this goal step-by-step in the West Bank, first targeting the less populated areas. This has been the strategy of Israel since 1948. However, Winstanley highlights that there is a current rise of extremists in Israel, who will play a future role in the government. According to him, Zionists are becoming more extreme and some extremists even suggest the demolition of the Al-Aqsa Mosque compound and building a Jewish synagogue in the same location.

Haydar Oruc underlines that unfortunately there are many indications of an ‘Armageddon’ projection of Christian and Jewish Zionists. Analysis on symbolic dates, locations and people, indicate the existence of such a utopian intention. Even though it may sound irrational, he says, it is important to accept the situation and develop policies accordingly.

There are not many signs to be optimistic about things turning around if immediate actions are not taken by both regional and international actors. The scrupulousness of Israeli and American political actors is the source of the ongoing illegalities and any possible armed conflict in the region, since they have direct power to influence decision makers both in Israel and the U.S.