The French are getting more used to far right by the day. The enemies and targets of the far right movements change, but their ideas are the same. It could be said that after a couple of decades of inactivity, they are full of life now. As they’re no longer contained in the far right parties but exist within both right-wing and left-wing party, this wasn’t a challenge. 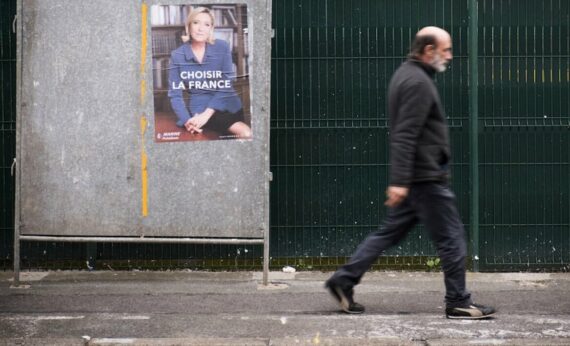 The French are getting more used to far right by the day. The enemies and targets of the far right movements change, but their ideas are the same. It could be said that after a couple of decades of inactivity, they are full of life now. As they’re no longer contained in the far right parties but exist within both right-wing and left-wing party, this wasn’t a challenge. There are other variables, of course; during Edgar Morin’s childhood Jews were the target of the far right, now it’s Muslims. For instance, when Jean Marie Le Pen had overtaken Socialist Party Leader Lionel Jospin in the presidential elections and ascended to the second round with Chirac on April 21 2002, it took France by surprise.

At that time, Jean Marie Le Pen was the representative of Front National’s both anti-Semitic and xenophobic streaks, while the former was more dominant. On May 1 2002, the French public took to the streets to protest in masses; with the call of all unions in France, 1.5 million people went out to the streets, 400,000 of them being in Paris, and newspapers ran headlines like “No!” 15 years later, according to the French Ministry of the Interior, there were a little bit more than 140,000 people who went out on the streets to protest Le Pen on May 1.

In the first round of Presidential elections, Jean Marie Le Pen had garnered 16.86% of the votes, while Chirac took 19.88%. Receiving the lowest support of the Fifth Republic, Chirac received 82.21% of the votes as a result of the mobilization of all voters; therefore, he was elected president with an unprecedented percentage since the time of the Soviet Union need to oppose Le Pen. Today, his daughter Marine Le Pen made it to the second round of elections with 21.3% of the votes and, according to recent polls, there is around 40% support for her.

There are two important factors explaining this. Firstly, Marine Le Pen, unlike her father, didn’t say anything that might sound anti-Semitic; she targeted Muslims rather than the Jewish minority. Secondly, Islamophobic discourses, which used to be associated with the far right, were embraced by reputable figures in both the right and the left, who have started to utter them with impunity. As a matter of fact, it was normalized. We have to give Marine Le Pen her due; whatever discriminatory statements she made while campaigning were already surpassed by numerous figures of the right and the left a long time ago.

Muslims have been exposed to the foul statements of many: Alain Finkielkraut, Elizabeth Badinter, Plantu, former prime minister Manuel Valls, Sarkozy and so on. However, if Jewish lifestyle and belief was to be boycotted and protested today, all hell would break loose in France! Think about what would happen if the kippa, or Jewish clothing became an issue, or the long beards of Jewish men; or if Jewish children were forced to receive an extremely Orthodox education at kindergarten; or if Jean Pierre Chevenement’s “advice” to Muslims, to make themselves less apparent in the public, was intended for Jews… However, it’s not possible; you cannot replace Muslims with Jews in these kinds of situations. It’s not allowed, because anti-Semitism is a crime against humanity. For something to be a crime against humanity in France, it has to be tried at Nuremberg. What was tried there? Genocide. Therefore, without genocide and a trial on genocide, nothing is a crime against humanity, at least in the Old World. Returning back to Edgar Morin’s childhood, when Jews were being targeted but the Holocaust wasn’t committed yet, anti-Semitism wasn’t considered as a crime against humanity; therefore, by this logic, today Islamophobic statements and acts are not a crime against humanity.

We have seen the most recent instance in a statement by Phillippe Moreau Defarges, a professor of International Relations. On the show on BFM, Defarges, referring to the recent referendum on the change in system of government in Turkey and 51.41% yes vote, said “after this point, the only way to get rid of Erdoğan is either a civil war or an assassination.” The moderator didn’t signal to take the show off the air, nor did he say that Defarges was committing a crime and that they were becoming an accessory to it; the moderator only said “this is an illegitimate proposition.” Defarges even said more: “This is a method that has been discussed since Ancient Rome and religions have even discussed it.” There weren’t any reactions towards Defarges’ statement about a president who was elected in the first round with 51.79% of the total vote. Let me tell you why: Islamophobia.

Marine Le Pen has been updating the extreme right ideology since her father’s departure from the party, and she has been doing this in accordance with the “zeitgeist.” Therefore, in the context of “zeitgeist,” neither Marine Le Pen’s success in the first round, nor her projected score in the second round, nor the possibility of Front National having 50-60 seats in the parliament after June elections is creating the kind of ripples seen in the past. When talking about her Islamophobic and anti-immigrant statements, at least… Although her statements about Frexit, leaving NATO, having a Russia-friendly foreign policy and return to French franc concerns the majority. If you examine it, the understanding of the majority is also disputable; if you consider leftist presidential candidate Jean Luc Melenchon has a similar outlook on the same issues and he had 19% support in the first round, the concerned “majority” doesn’t surpass 50%.

On the other hand, now that the two largest political formations of the country, the Socialist Party and the Republicans, were eliminated in the first round, the race is not between the traditional left and right. French people will make their choice among two different world views rather than two candidates about whom they know nothing of. An economic, cultural and social liberalism, which is in favor of the EU and globalization, versus a hegemonic French nationalism that is against the EU and globalization – these are the choices. For some this is a cartoon, while for others a sci-fi film; however, it’s very real.

One of the candidates is a deputy of the European Parliament, a parliament of the very EU she is against; while the other served as the former minister of finance and economy under François Hollande and is competing for the first time in the elections. If we are to think that one of every two French votes was cast in protest, it could be seen that Macron’s vote in the first round was not that high. What’s worse is that Macron isn’t expected to garner around 80% of the votes against Le Pen; it will be considered a triumph if he can merely surpass 60%. Yet, this is problematic, as support to Madame Le Pen is around 40%.

Moreover, there isn’t any consensus between the right and left in terms of supporting Macron who is already being supported by big business. It’s not that easy anymore. There is an increasing indignation towards global capitalism and the cost of the 2008 financial crisis by the people of both the Old and New World. While more than 20 high schools in Paris marched against Marine Le Pen, there were as many high schools, which did the same against Macron. When CFDT, the most prominent union of the country, called people to vote for Macron, their headquarters were vandalized. “Collabo” (Collaborator) was written on the building. Another union, Force Ouvriere, on the other hand, didn’t make any statement about which candidate they support. Some called to “destroy” both of the candidates. Regardless of their political disposition, there are politicians and voters who won’t hesitate in voting for Le Pen. Furthermore, parliamentary elections are to follow the presidential elections. For this reason, Melenchon, who is aiming to form a powerful group in the parliament, didn’t call for support to any candidate; he just expressed that he wasn’t going to vote for Le Pen.

Despite all odds, if Macron is able to garner more than 60% of the vote on Sunday, he will be able to administer the country with a strong mandate. However, if the opposite happens, he might have to cohabitate as Mitterrand and Chirac have done. Either way, it seems that Macron will be the 7th president of France after De Gaulle, Giscard, d’Estaing, Mitterrand, Chirac, Sarkozy, and Hollande. On the other hand, there are no obstructions that can halt Marine Le Pen’s progress. Even if Le Pen loses the presidency, her ideology will prevail in both the right and left wing politics.