The “European Defense Union” initiative is a manifestation of the campaign kicked off by Germany and France in order to create excitement within the Union and to take an effective step against the Eurosceptics. 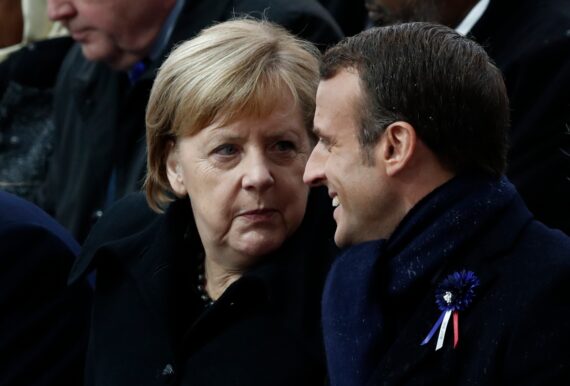 German Chancellor Angela Merkel (L) and French President Emmanuel Macron attend a ceremony at the Arc de Triomphe in Paris on November 11, 2018 as part of commemorations marking the 100th anniversary of the 11 November 1918 armistice, ending World War I. Getty Images

The foreign and defense ministers of 23 EU ministers signed a protocol in Brussels on Monday, which is considered as the first step towards establishing a European defense union. The signing of this document, which sets forth the increase of defense spending, forming joint armament projects, and setting up a joint military force to employ for intervention in crises when necessary, seems to have caused an excitement among various circles within the EU.

In fact, such a development was already expected considering German Chancellor Angela Merkel’s statement that Europeans must take care of themselves from now on after a number of unsuccessful meetings with U.S. President Donald Trump, and French President Emmanuel Macron’s call for reforming the EU in a way to encompass an increase in defense cooperation.

However, the primary question that needs to be answered here is whether the will of Germany and France will be enough to form a defense union in the EU. As similar attempts in the past have failed, it seems that establishing a defense alliance independent from NATO will be a challenging task for the EU.

As similar attempts in the past have failed, it seems that establishing a defense union independent from NATO will be a challenging task for the EU.

A year after the formation of the European Coal and Steel Community (ESCS) in 1951, which laid the foundation of the EU, the treaty establishing the European Defense Community, which was led by France with the motivation of controlling Germany and excluding the U.S., failed to obtain ratification in the French parliament and thus did not enter into force. Since the French government failed to convince its own parliament into a European defense force, Western countries, including France, spent the Cold War period under the umbrella of NATO, which has always been dominated by the U.S.

With the end of the Cold War, a group of EU countries, again led by France, attempted to form a defense unit under the umbrella of the European Union in order to liberate the EU from U.S. influence. However, they were impeded by the “pro-Atlantic” group led by the UK. They discerned their military shortcomings when they wanted to intervene in Serbia in order to end the refugee flow during the civil war in Yugoslavia, while the U.S. was reluctant to provide support for a long time. Even this realization did not bring success to Europe in terms of implementing its own policies to create a pan-European military force.

Due to pressures within the Union, during the St. Malo Summit in 1998, Britain showed a green light to the formation of a European army, which would not be considered as an alternative to NATO. The task of establishing a “European army” and “European police force” by 2003, which would perform the task of “intervening in crises” was determined in the Cologne and Helsinki summits in 1999. The transmission of the military institutions of Western Europe to the EU in the Laeken Summit held in 2001 was a considerable step in terms of creating a defense force in Europe. In the meantime, the efforts initiated for a “European Union Constitution” comprised the political leg of a possible military cooperation and signified a gradual approach to the federal unit ambition of the “Europeanists.”

The “European Defense Union” initiative is a manifestation of the campaign kicked off by Germany and France in order to create excitement within the Union and to take an effective step against the Eurosceptics.

Soon after these initiatives, Europe confronted a series of catastrophic incidents and crises for the integration of the continent. During the 2003 U.S. invasion of Iraq, while some EU member states supported the U.S., others strongly opposed. Due to this, the idea of a “European Army” was suspended. Subsequently, the ideas of a common constitution and federalism suffered a major blow after people in the Netherlands and France voted against the EU Constitution in the referendums held in 2005.

The last couple of years have been marked as a period of crises for the EU due to the evolution of the 2008-2009 global economic crisis, the refugee challenge, the rise of xenophobia and Euroscepticism, the crisis of separatism, Brexit, the crisis in Transatlantic relations, and the increase of terror attacks. The “European Defense Union” initiative is a manifestation of the campaign kicked off by Germany and France in order to create excitement within the Union and to take an effective step against the Eurosceptics. However, the failure of past attempts cast serious doubts on the prospects of this initiative since the EU is going through one of its weakest periods.

Also Read
The US atrocity and Trump as a scapegoat