The subjugation of the land of the Palestinian nation and blockade of the Sacred sanctuary of Islam by the Zionist regime of Israel are the major reasons for the reactions of the Muslim nations worldwide, including the ones in Southeast Asia as well. 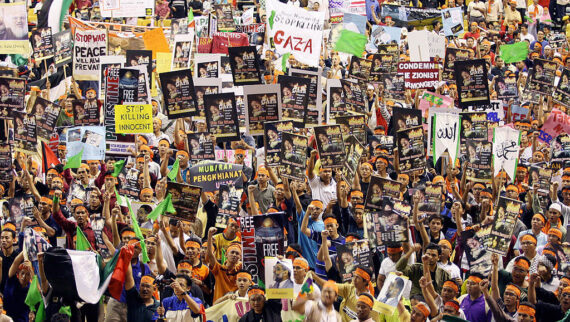 Malaysian Muslims gather as they protest against the Israeli action in Gaza, at a stadium in Shah Alam on January 10, 2009. Getty Images

The turbulence in the Middle East between Israel and Palestine has undoubtedly had a great impact upon the policies of the nation states and sensitivities of the Muslim communities in Southeast Asia.

It is assumed that having larger Muslim populations in some countries such as Indonesia, Malaysia, and Brunei in the region would translate to a strong united stand in international politics to challenge the policies of Israel and its allies. However, whether this is reflected in real life or not is another issue.

And it is observed that these countries procedurally contribute to the resolutions consecutively taken during and after various occasions for more than half a century in relevant bodies of the United Nations (UN) and also the general meetings of the Organization of Islamic Cooperation (OIC). As seen in the above-mentioned account, these three countries simply reflect their own nation-state approaches.

There are two reasons for why Southeast Asian countries have an anti-Israel stance: first, an Islamic sense of belonging and second, the past experience of colonization.

On the other hand, they recognize the legitimacy of the free Palestinian state and have Palestinian embassies or representative bodies in their relevant capital cities.

Islam as a uniting factor

There are two areas which determine the anti-Israel stance and policies of the above-mentioned nation-states in support of Palestine.

The first one is related to the fact that the people under these respective nation-states historically and anthropologically, called the Malays, have always been considered as Muslims.

The Malays’ strong relationship with Islam and Islamic discourse should not be regarded as insignificant.

The Malays’ strong relationship with Islam and Islamic discourse should not be regarded as insignificant even though they live in the so-called periphery of the Islamic world.

The feeling of being a part of the larger Ummah is a major reason why the Malays continue appreciating the importance of Al-Quds. This socio-cultural situation plays a decisive role for the establishment of policies of these nation state towards the Middle-East based conflict.

Reaction to the neo-colonial situation

The second reason is that the Malay people, who themselves were subjugated by the Western colonizers throughout the centuries, have sympathy towards the Palestinians as an oppressed group, who are being deprived of their legal and legitimate land and rights.

In this regard, the anti-colonial stand of Southeast Asia countries helps in taking a pro-Palestinian stand in the Middle East.

The policies developed under the leaderships of founding fathers Sukarno in Indonesia and Tunku Abdul Rahman in Malaysia were structured by the above-mentioned anti-colonial sentiments. These sentiments are still valid pertaining to the relevant article referred to in the Indonesian constitution.

While the former initiated strong ties with Arab leaders, the latter is known to have developed the idea of the OIC to protect the rights of the Palestinians.

In addition, Dr. Mahathir Mohamad, the fourth prime minister of Malaysia, gained fame globally due to his outspoken reactions against Israel. He expresses his thoughts and feelings without mincing his words against the Israeli government. He even described the latter as responsible for state terrorism against the Palestinians.

The anti-colonial stand of Southeast Asia countries helps in taking a pro-Palestinian stand in the Middle East.

As he is ruling the country, currently in his second tenure, he continues his anti-Israel stand, which was witnessed in his most recent statement that Israel is “the root cause of world instability.”

Though some Western scholarly works emphasize to criticize the stand of these leaders as having ‘pro-Arab’ tendencies, it is perceived that this labelling aims to distort and manipulate the reality appearing in the form of the Zionist invasion of Palestinian lands.

On the other hand, some leaders have attempted to build bridges in order to normalize their relationship with Israel, either because of global pressure or demands from the Israeli government.

In particular, this occurred in the vicinity of the Middle East peace talks in the late decades of the previous century during the Suharto era in Indonesia, although there were no convincing developments.

Besides that, Abdurrahman Wahid, former Indonesian president, during his tenure as the president, as a liberal politician, tried to take concrete steps for the above-mentioned normalization, but he failed to realize it.

Southeast Asian Muslim states claim explicitly that the Israeli-occupied territory is an inseparable part of the historical and legal right of the Palestinian people.

In general, it was observed not only in Wahid’s attempt, but also in the attempts by Indonesian political elites, who conditioned first the fair peace process between Israel and Palestine, but could not act without considering the Muslim community’s sensitiveness to the issue.

While the country is still undergoing a reformation process, which is mainly reflected in the form of socio-economic development, this reform process implicitly covers the international relations side as well. As observed, political leaders such as Susilo Bambang Yudhoyono, the former president, and Joko Widodo, incumbent president, have from time to time attempted to attract world public attention by hosting democracy forums, extraordinary OIC meetings etc.

It suffices to note here that the subjugation of the land of the Palestinian nation and blockade of the Sacred sanctuary of Islam by the Zionist regime of Israel are the major reasons for the reactions of the Muslim nations worldwide, including the ones in Southeast Asia as well.

And they acknowledge explicitly that the Israeli-occupied territory is an inseparable part of the historical and legal right of the Palestinian people. As a result of this, the Muslim population in the region continue to demonstrate great sympathy to the Palestinians, and the respective states have not undergone any significant changes in their policies to extend their support for Palestinian rights.