Secular, enlightened and protestantized Muslims, or activists like Tunisian Amina Tyler – who exposed her body in 2013 with the slogan "This body is mine. It is no one’s honor" – correspond with the ideal Muslim prototype in Schirmbeck's mind. 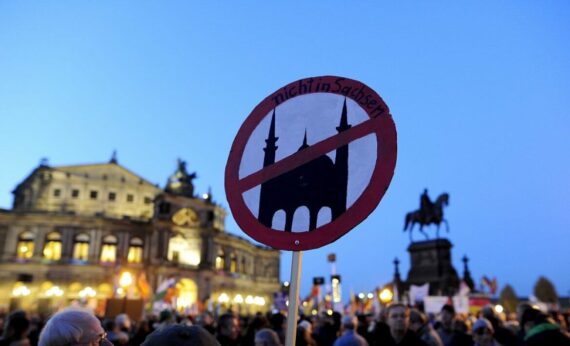 In her book Alice im Männerland: Eine Zwischenbilanz (Alice in the World of Men: An Interim Balance), the most prominent feminist of Germany, Alice Schwarzer, described the Muslim headscarf as “the flag of the Islamic Crusade” in 2002. Schwarzer, who tends to deal with questions around Islam and Muslims in Germany in a prejudiced manner, was one of the first public figures to use a terminology like “Islamic Crusade” – an audacious oxymoron if one is educated in terms of the history of the crusaders and their bloodshed against Muslims. A decade later, Samuel Schirmbeck titled his book in a similar fashion: “The Islamic Crusade”. He proposes that the headscarf is not the only thing posing a problem to the West, but also the Quran, Muslims, and well, to keep it short, Islam in general.

SecurityBy Mustafa Caner
In the 1990s, Schirmbeck was a journalist in Algiers and worked for Germany’s public broadcasting channel ARD, which seems to give him the authority, or ijaza, as he likes to use Arabic vocabulary in his book, to speak as an expert on Islam. With this use of specific vocabulary he tries to legitimize his arguments about Islam from a sociological, historical, philosophical, or even a hermeneutical Quranic perspective. According to his reference point– liberal and secular Muslims from Morocco and Algeria, who according to him seem to be the only decent Muslims existing – he offers his readers categorical solutions to deal with the problem of Islam and Muslims in the West. The answer is difficult and simple at the same time: reforming Islam (or “a superior humanistic principle”, as he calls it) and allowing criticism of Islam. In the spirit of Ayan Hirsi Ali, he addresses his recommendations or demands towards Muslims and their misguided liberal leftist allies.

According to the author, there is a major threat looming for Europe and the ideas of liberalism, freedom and the public space. But what exactly is it and what should be targeted? A faith or an ideology? Believers or terrorists? Islam or terror? Typically for Schirmbeck, the answers are vague, especially for someone who studied Critical Theory at the Frankfurt School, which produced pioneers of Critical Theory such as Theodor W. Adorno and Max Horkheimer. The list of problematic imprecise characterizations of the key issue in Schirmbeck’s book includes “today’s Islam” (p. 10), “Islamic terrorism” (p. 13), “fundamentalism” (p. 15), “the regular Islam” (p. 24) or simply “Islam” (p. 48). The Islamic Crusade suddenly becomes a “Wahhabi Crusade” (p. 28) so that the author undermines the principle of Deutsche Gründlichkeit (German thoroughness), as well as philosophical accuracy. If one wants to continue without losing the author, he or she should accept that there is a problem with Islam, bottom line. So what is to be done about it? (1) Hermeneutics instead of literal understanding, (2) the abandonment of a distinction between believers and non-believers according to the Quran, and (3) the acceptance of the idea that Islam and Islamism are undoubtedly connected with each other.

The instruments for accomplishing these goals are clear as well: taking the Mutazila – a speculative school of thought in early Islam – as the model as well as the preference of ijtihad instead of jihad. For attaining these goals, Islamic associations in Germany and liberal leftists or the 1968’ generation seem to be the biggest obstacles. Accusations of Islamophobic rhetoric are to be dismissed as simply a clever strategy to undermine, or hide, Islam’s true nature: a source for violence against women, homosexuals, and members of other faiths and non-believers.

His request that Muslim organizations should distance themselves from violence and terror, and should reform mosques, as well as the position of women within the religious tradition is also not very innovative. Just as radical Muslim voices purport to know what the “only one, true Islam” in reality is, so does Schirmbeck. Secular, enlightened and protestantized Muslims, or activists like Tunisian Amina Tyler – who exposed her body in 2013 with the slogan “This body is mine. It is no one’s honor” – correspond with the ideal Muslim prototype in Schirmbeck’s mind.

Or take the ones in chapter nine, in which Moroccans publicly state their un-Islamic lifestyle. Ironically, the German social scientist Necla Kelek is listed as one of the precious critical Muslims, though she has publicly declared she has no bond with Islam, but rather feels peace when she is at a church. When it comes to his authenticity and significance for matters on Islam, his descriptive experiences in Algeria, friendship with people from Muslim-dominated countries, as well as his interpretation of several verses from the Quran seem to legitimize and declare him as an authority, a common delusion found in biased interpretations.

There are several problems with this book, besides the ones already mentioned. Tone, methods, premises and conclusions seem to have no objective observation in the first place. One example would be his claim that the media and political parties in Germany do not discuss the problems around Islam and rather rely on topics like Islamophobia. Even if he has sincere advice for Muslims, which is hard to believe, Schirmbeck’s book is not helpful in any way, shape or form to lead to a constructive debate about faith, identity, immigration, violence etc.

When Al Qaida, Boko Haram, or Daesh are mentioned in the same line with all (conservative) Muslim associations in Germany, the ground for a rational debate is lost completely. For Schirmbeck, the link between Islam, backwardness and terror is obvious. Claims for the right to wear headscarves for teachers, or praying rooms at universities for students, are in the same category as the brutal beheadings of Daesh, all part of this “Islamic Crusade”. This type of declaration would be considered as hate speech in many modern legal interpretations. There are several anti-Islamic and xenophobic books in Germany in the spirit of Pamela Geller or Robert Spencer, which are distributed commonly by alternative publishing houses. But this book, unfortunately, finds its place in mainstream book stores, as did Thilo Sarazzin’s bestseller Deutschland schafft sich ab (Germany is abolishing itself) in 2010. The book is also featured on mainstream websites such as Deutschlandfunk, where it is described as being an “exciting book”.

But maybe one has to be fair and say Schirmbeck has just caught the Zeitgeist of a growing, presentable racist and Islamophobic attitude in the West. Islam is probably the only world religion which constantly faces accusations (like the ones presented in the book) which is considered part of free, and even progressive speech. To be specific, as Schirmbeck is in terms of Islam, it is not an exaggeration to say that produced a poorly-written book in the spirit of Eurocentrism and racist orientalism.