Israeli Jewish Extremism and Radicalization in the 21st Century

Jewish extremism in Israel has taken dramatic shifts recently especially after the passing of the nation state law, which defines Israel as a Jewish state. 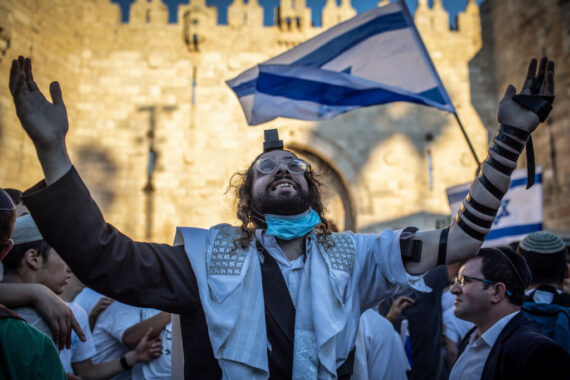 Astudy conducted by Dr. Noa Lavi in 2016, found Israeli youth to be “the most right-wing compared to countries in Western Europe.” A 2018 Israeli Democracy Institute survey showed that “approximately 64 percent of Israeli Jews aged 18-34 identify as right-wing, compared to 47 percent of those 35 and older.” Israeli Jewish radicalization did not start in the 21st century. Its antecedents are critical to understanding this moment. For more information, see here (link to other article above).

The underlying beliefs of the Israeli right-wing are: Territorial expansion into all of Eretz Yisrael (historic Palestine), prioritizing Jewish identity over democracy, focus on security and Israel’s existential threat, distrust of Palestinians and foreigners, and centrality of Nationalism/Patriotism.

Israeli Jews have been misled by being told repeatedly there was a ‘failed peace process’ without a Palestinian partner. Neither government officials nor educational institutions say that two decades of the Oslo process was never about peace, instead, entrenching Israeli control over more of historic Palestine. Israeli youth grew up during the Second Palestinian Intifada. Suicide bombings and missiles from Gaza were the vehicles that allowed Israel to justify itself as the victim.

Israelis were trained to believe Palestinians were terrorists and wanted to wipe Israel off the map, while Israel besieged and assaulted Gaza and occupation continued. Young Jewish Israelis have no contact with Palestinians unless in a military uniform as occupier or as illegal settlers: they live in different communities while the apartheid wall separates Israeli Jews (and other Palestinians) from Palestinians.

Since 2009, Israeli Jewish youth only know Netanyahu as Prime Minister, and right-wing fascist leaders including Avigdor Lieberman, Naftali Bennet, and Ayelet Shaked. They have seen Netanyahu: expand settlements; illegally annex Palestinian lands; pass the nation-state law; neglect Palestinian communities; ignore organized crime; tell Palestinians in Israel to go live in the West Bank and Gaza; say that a coalition with Arab political parties “would be an existential threat to Israel”; incite violence toward Palestinians; condone police collaboration with Israeli Jewish settlers and other extremist groups attacking Palestinians in Israel; and again pursue a policy of intensified military aggression on Gaza with disregard for killing civilians.

Netanyahu’s right-wing government also advocates for: territorial expansion; Palestinian transfer; mowing down Gaza; stripping Palestinians of citizenship; passing half of the 65 discriminatory laws in Israel. These actions give settlers and nationalists justification for violence against Palestinians. Amos, a 17-year old Israeli, was quoted in 2019 saying: “killing Arabs is a religious duty.”

Under Netanyahu, Social justice demonstrations in 2011 demanded solutions to lack of housing, the rise in cost-of-living, corruption, and government accountability for social welfare. As African asylum seekers sought refuge, the government demonized and blamed them for societal ills, detaining and forcibly deporting them because of xenophobia and anti-black racism. Add to this, recent police provocations blocking the Damascus Gate during Ramadan, escorting Israeli settlers to the Temple Mount, and decades of forced displacement of Palestinian families from Sheikh Jarrah and all over Palestine.

The Palestinian civil society’s call for Boycott, Divestment, and Sanctions on Israel became a focus for the Netanyahu government after globally gaining traction. The government started funding public relations strategies, pouring resources into misinformation campaigns calling BDS antisemitic, banning its Jewish and non-Jewish supporters from Israel, and supporting the International Holocaust Remembrance definition of antisemitism to include critiques of Israel.

In 2005, Gush Katif settlers in Gaza were removed. And the betrayed settlers founded new settlement projects in mixed cities all over Israel. In the last decade, the Israeli settler movement focused on creating a presence in mixed cities such as  Jaffa, Lyd, Ramle, and Acre, to keep land in Jewish hands and a Jewish majority,  cities ethnically cleansed of many Palestinian inhabitants in 1948. Settlers build West Bank-like settlement enclaves, where Palestinians are kept under surveillance and settlers are protected by police, showing no interest in coexistence.

Recent incidents show clearly this extremist violence. In Jerusalem, Lehava, a violent Israeli Jewish anti-miscegenation, anti-Arab organization, organized a demonstration at Damascus Gate during Ramadan chanting “Your village should be burnt down” and “Death to the Arabs.” Over 100 Palestinian were injured and others detained. Police used “stun grenades, tear gas and water cannons” against Palestinians. Besides police protection, a 2011 investigation exposed that the Israeli government had funded over half of Lehava’s budget. Lehava, Ateret Cohanim, Yad L’achim, and other extremist groups are sheltered from accountability for the violent crimes they commit and are funded from abroad.

In Bat Yam, fascism spread to the Mizrahi-majority city. Three Israeli Jews pulled Palestinian Said Musa of Ramle from his car and brutally beat him while being filmed by Israeli TV. Fascist groups also roamed Tiberius and Acre attacking Palestinians and their businesses.

Palestinian journalist Rami Younis of Lydd points to incitement by Israeli media to “shoot and kill Palestinians,” while also describing the Jewish mob attacks in Ramle and Lydd, with special unit police collaboration. Though there were curfews for residents in the mixed cities, the settlers were “escorted by Israeli police and allowed to roam free.” The groups marked Palestinian homes to attack later. The legal system also colludes with police and settler violence. Younis explains that only 2 of 162 indictments were brought against Jewish supremacists, while all others were against Palestinian protesters.

Tamr Nafar of Lydd, Palestinian rapper and activist, co-founder of DAM, speaks about Jewish settler violence against Palestinians in Lydd being “armed and protected by police”, while setting the context of structural inequality in mixed cities.

At the same time, West Bank Palestinians are detained and shot, and families are evicted from their homes. The aerial bombardment of Gaza over 11 days is evidence of the Israeli demonization of Palestinians there. Israel targeted civilians and media and health centers. Whole buildings collapsed in a matter of seconds, decimating entire families, and leaving tens of thousands of Palestinians without homes.

There are endless stories showing the web of connections between the Israeli government, police and military, settlers, and other extremist groups. To address the radicalization of youth, one must recognize that the majority of Israeli Jews accept this status quo. However, there are a minority of Israeli Jews calling for an end to apartheid and for decolonization.

U.S. funding of Israel’s occupation, apartheid, and siege of Gaza is unconscionable. Israel’s 73-year rejection of international law, and five-decade military occupation over Palestinians must end. The international world must address Israel’s system of apartheid and war crimes.

I come from a long line of Sephardic Jews who have held the belief that living in a pluralistic, multi-faith, multi-ethnic society is both desirable and necessary for humanity to flourish. The future of Israel depends on international pressure forcing Israel to address the harms of the Nakba and occupation and the deeply entrenched racism in Israeli society, as well as Israeli Jews imagining their own liberation through a pluralistic democratic society with Palestinians.

Only through accountability and with imagination can something more radically beautiful exist: full and equal rights, protection for all citizens, a refuge for others in need, and the capacity to influence the world through such transformation.