By killing Abu Akleh, Israel wants to send yet another message to the Palestinians and their supporters across the globe that no one is safe. 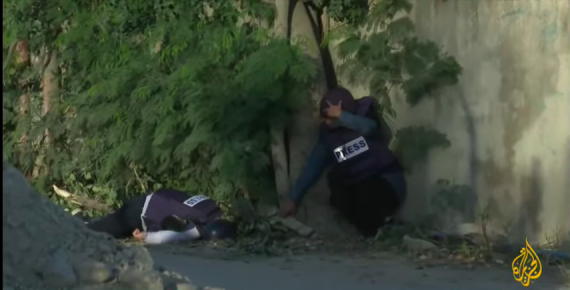 Shireen Abu Akleh was shot dead by an Israeli sniper in the West Bank city of Jenin on May 11, 2022. Photo screen from Aljazeera Network.

On the morning of May 11, 2022, an Israeli sniper shot and killed prominent Palestinian journalist and Aljazeera reporter Shireen Abu Akleh in the West Bank city of Jenin. In an open area, she was shot below her ear, while wearing her press gear and helmet, clearly marking her as a journalist. At the same time, Ali Al-Samoudi, a long-time Aljazeera producer, was shot in the back. The group of Palestinian journalists were in Jenin to cover yet another Israeli incursion.

Palestinian journalists who were next to Abu Akleh, including Al-Samoudi, who is currently in hospital receiving care, refuted the Israeli narrative, adding that the fact that she was shot in the head by an Israeli sniper reveals that her killing was intentional. Following Abu Akleh’s death, Palestinian priests prepared the body for the funeral.

Thousands of Palestinians carried the body, wrapped in a Palestinian flag and with her vest resting on her, and marched in Jenin refugee camp. Abu Akleh will be buried in her native city of Jerusalem. Israel’s killing of Abu Akleh has resonated with millions of people across the Arab world who had followed her 24-year-long coverage of events in Palestine, sending shock waves and condemnations across the region.

Aljazeera network has condemned the murder of its prominent journalist in a statement, adding, “We hold the Israeli authorities responsible for the safety of Al Jazeera producer Ali Al-Samoudi, who was targeted with colleague Shireen by shooting him in the back during his coverage and he is undergoing treatment.”

Shatta Hanarsha, a journalist and a friend of Abu Akleh, who was with her when she was fatally shot told Aljazeera, “A group of journalists were in Jenin refugee camp. We were in an open space so that the Israeli occupation forces could see us clearly. The four of us were wearing our press gears. There were no clashes or gunmen in the area. In front of us were Israeli snipers and behind us was an Israeli wall. First, Ali Al-Samoudi was shot and Shireen started screaming. Then, Shireen was injured, and they intentionally shot at us, and their intention was to kill us as they continued shooting even after Shireen was injured.”

Footage shows Hanarsha standing next to Abu Akleh as she was shot and was lying on the ground, and another Palestinian journalist screaming “Ambulance, ambulance!”

Abu Akleh joined the Aljazeera team in 1997, and professionally and independently covered Israel’s violations of international law and relentless aggression against Palestinians. Starting with the outbreak of the Second Palestinian Intifada (Al-Aqsa Intifada) in 2000, she covered the outbreak from her native city of Jerusalem.

In 2002, when Israel re-occupied the Occupied West Bank, she was present at every single Israeli incursion. Most prominently, she was known for her coverage of the incursion of the city of Jenin, where she was shot dead today, May 11, 2022, while covering yet another Israeli incursion in the city.

Talking about the intifada, these are her words, “I will not forget that death was near us, we could not go home. We held cameras and crossed military checkpoints and slept in hospitals to carry out our job … in 2002. Despite danger, we continued our work. I chose journalism so that I could be close to humans. I will not change reality, but at least I was able to convey that voice to the world, I am Shireen Abu Akleh…” The murder of Abu Akleh was shocking, but it comes as no surprise as Israel has killed 46 Palestinian journalists since 2000.

Abu Akleh was also known for her coverage of the Israeli withdrawal from the Gaza Strip in 2005, gaining popularity beyond Palestine across the years. She also covered the 2008/9, 2012, 2014, and 2021 Israeli wars on Gaza. Being a native of Jerusalem, she followed Israel’s ongoing violations against the Palestinians, and covered different Palestinian uprisings in the city from Bab Al-Amoud to Sheikh Jarrah and Israel’s repeated incursions into Al-Aqsa Mosque.

By killing Abu Akleh, Israel wants to send yet another message to the Palestinian people and their supporters across the globe that no one is safe. Israeli snipers, who killed Palestinian journalist Yasser Murtaja on April 6, 2018, knew well that they will get away with this murder, as they have with thousands of murders of Palestinians. Aljazeera network said it will take legal action and pursue all possible means to bring those responsible for the crime to justice. The response of the international community, which so far has been limited to condemnation, will ultimately determine whether the perpetrators will be brought to justice.

Palestinian journalists on the ground play an important role as they take the lead in conveying the decades-long struggle of the Palestinian people against their Israeli oppressors. Now, it is the responsibility of the world to take action to stop the non-ending Israeli occupation of Palestinian lands, and more importantly, its war against civilians including journalists, who seem to be so threatening to Israeli forces that snipers shoot at them daily in the occupied West Bank.

Palestinian journalists’ responsibility now is to forge forward in the spirit of Abu Akleh’s work: to continue honest reporting and have the courage to convey the message of those whose voice would otherwise go unheard due to the bias of the international community and mainstream media outlets.

These mainstream media outlets still think that the Palestinian people, who will mark the 74th anniversary of the Nakba on May 15, 2022, are still unworthy of media coverage or international solidarity. Exposing this misconception and grave injustice will force the Israeli government, whose shameful behavior was once again manifested in the horrific killing of Shireen Abu Akleh, to change its policies premised on superiority and apartheid.