If a stable government cannot be formed, Israelis might end up going to a fifth election. 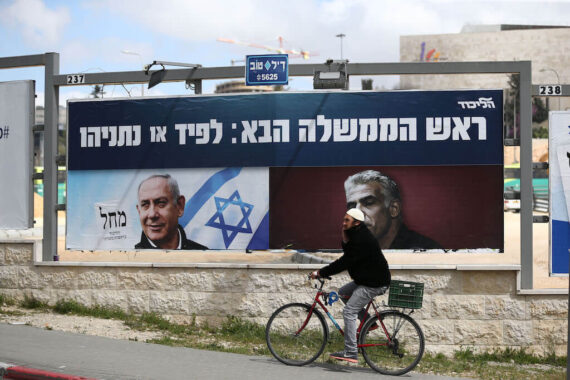 A biker rides past a campaign poster ahead of the Israeli general elections, planned to take place on March 23rd, in West Jerusalem on March 18, 2021. Photo by Mostafa Alkharouf, Anadolu Images

For the fourth time in two years, legislative elections were held in Israel on March 23, 2021 to elect the 120 members of the 24th Knesset. Israeli governments have to secure a majority in the Knesset with each member casting one vote.

Israeli right-wing parties such as the Likud party and their allies won 52 out of the 120 seats. The southern branch of the Islamic Movement led by Mansour Abbas won four seats. These results signify the continuity of the deadlock in Israeli politics with neither Likud and its allies nor their opponents able to secure a majority.

Both sides would need the support of the United Arab List and the Joint Arab List to secure a majority, which seems a difficult match. Yamina Party, which has seven seats in the Knesset announced it would not support any candidate.

To form a government, Benjamin Netanyahu must unite right-wing parties. Netanyahu stated, “With this majority, we have to build a stable Israeli government.” He added, “Join us in this government,” pledging to build “a right-wing government that will look after all Israeli citizens.”

Yohanan Plesner, the president of the Israel Democracy Institute, commented on the results by saying, “Israel is experiencing its worst political crisis in decades. It’s apparent that our political system finds it very difficult to produce a decisive outcome and this is as a result of inherent weaknesses in our electoral system, but it’s also because of the Netanyahu factor.”

News agencies across the world debated the issue. Deutsche Welle correspondent Tania Krämer noted that Netanyahu faces an uphill battle to forming a coalition. “It’s going to be very very narrow if you look at the exit polls.” She added that Netanyahu will likely have to secure support from other parties outside his camp. “If you look at the last election, Likud did much better at that time. He lost a couple of seats and it will be even more difficult now to form a coalition,” Krämer asserted.

Mustafa Fatih Yavuz, the TRT World correspondent in Jerusalem, stated, “The parties that constitute the anti-Netanyahu camp have huge ideological differences which may prevent them from functioning as a coalition. The Israeli media say they could come together to pass legislation preventing any candidate under indictment from forming a coalition which would remove Netanyahu from the equation and a fifth election could be on the cards.”

Yossi Mekelberg, a professor of international relations and an associate fellow at the Middle East and North Africa Programme at Chatham House, declared “Israel’s democratic system needs a radical overhaul, and with it a set of clear rules governing the criteria and norms that should apply to those seeking to enter public life and to their behavior once elected.”

“Israel’s democratic system needs a radical overhaul, and with it a set of clear rules governing the criteria and norms.”

Gayil Talshir, a political scientist at the Hebrew University of Jerusalem noted that “no camp has an actual straightforward way to create the government and that means that both camps are going to work very hard and Netanyahu is going to try to find defectors from the change camp or at least get Abbas the head of Islamist party to abstain in the vote so Netanyahu will have a government.”

As a result of the political stalemate, if a stable government cannot be formed, Israelis might end up going to a fifth election in the near future.