The World Health Organization criticized "bilateral deals" in the vaccine race, yet failed to call out Israel on account of its deal with Pfizer. 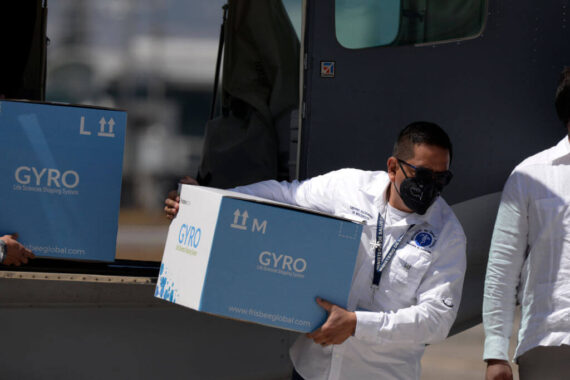 A health worker unloads a box from a plane as 5,000 doses of the Moderna vaccine against COVID-19 donated by Israel arrive at the Air Force base, in Guatemala City on February 25, 2021. Photo by Johan Ordonez, AFP via Getty Images

In February, Israel gave the first inklings that it will once more resort to its brand of humanitarian diplomacy – a scheme where the government provides humanitarian aid to countries in need, in return for diplomatic support in the international area. Honduras was the first country mentioned in Israeli media as having agreed to receive coronavirus vaccines from Israel while pledging its support to the settler-colonial state.

Guatemala also followed suit. Both countries confirmed the arrival of COVID19 vaccines last month. Israel is not producing vaccines – its purchased surplus is being used either to reward countries for their diplomatic support, or to procure any future allegiances as needed. Guatemala was the first Latin American country to open its embassy in Jerusalem in 2018, mere days after the US inaugurated its premises in the city which the international community still holds subject to final status agreements. Honduras has also pledged to do the same.

Israel was able to embark upon this strategy due to an agreement with Pfizer signed last January, in which medical data would be shared by the pharmaceutical company in exchange for vaccine stockpiling. With absolute contempt for the inequalities highlighted throughout the pandemic and especially now in terms of vaccine supply, Israeli Prime Minister Benjamin Netanyahu stated Israel would be “a model state” in light of this agreement, which also puts Israel at the helm in terms of vaccination rate and population reach.

Israel is the only country to broker such a deal with Pfizer, and one that breaks the protocol of data protection at that. The World Health Organization criticized “bilateral deals” in the vaccine race, yet failed to call out Israel on account of its deal with Pfizer.

Brazil has also sought Israel’s medical expertise. An official Brazilian delegation which includes Eduardo Bolsonaro, son of Brazilian President Jair Bolsonaro, arrived in Tel Aviv on Sunday to review a new treatment developed by Israel and which is in the early stages of clinical trials.

Latin America has long been perceived by Israeli Prime Minister Benjamin Netanyahu as a region where potential allegiances can be consolidated. In 1947, 13 Latin American countries supported the UN Partition Plan. Historical ties and early support for the Zionist project in the aftermath of the Nakba, as well as Israel’s role in supplying right-wing dictatorships with weapons and aircraft, illustrate an ongoing diplomatic relationship that was mostly opposed by Cuba, Venezuela and Bolivia, particularly after Israel’s 2009 aggression against Gaza dubbed Operation Cast Lead.

While former Israeli Defense Minister Avigdor Lieberman visited the region in 2009 to boost economic ties, it is a more recent endeavour by Netanyahu that  signalled the beginning of Israel’s allegiances, at a time when the world was promoting Israel’s security narrative. Latin America is also one of Israel’s largest weapons buyer.

In 2020, Netanyahu had stated, “We are currently developing ties with Latin America. It is a great market in a large bloc of important countries. There is a breakthrough here.” Colombia, which was on Netanyahu’s itinerary last year, was described as a country offering “unconditional support for Israel.” A statement that is of little wonder, considering the US relationship with Colombia and the latter’s track record of human rights violations, which the US finances, of course.

One of Israel’s strongest diplomatic weapons is its humanitarian missions. In November 2020, for example, Israel responded to calls for humanitarian assistance following Hurricane Eta, sending contingents to Guatemala, Honduras and Panama. The international humanitarian assistance – a policy adopted in 1958 – has since become a veneer for the more pressing atrocities against the Palestinian people.

The discrepancy between a country whose officials are facing possible investigation at the International Criminal Court (ICC) and the humanitarian response has so far not raised eyebrows. Israel has successfully managed to dissociate from its colonial violence, promoting itself, with the help of the international community, as a benevolent entity. The colonial violence Palestinians face on their own land has long been hushed under another veneer of humanitarian aid, albeit this time under the auspices of the UN’s institutions.

Since the vaccine rollout, Israel has been reticent to assume its obligations towards the Palestinian people and provide vaccinations for the population, stating that the Palestinian Authority was responsible for healthcare. The decision to provide vaccines for Latin American countries while refusing supplies for Palestinians was taken unilaterally by Netanyahu, and opposed by Benny Gantz, in a move that signals electoral competition as Israel heads towards the polls again this month.

Israel’s Energy Minister Yuval Steinitz defended Netanyahu’s decision. “It’s un-humanitarian not to give vaccines to someone in need,” he said. “The doses donated to each country number in the few thousands.”

US Senator Bernie Sanders unequivocally rejected Netanyahu’s decision, criticizing Israel’s diplomacy at a time when Palestinians, who have one of the lowest vaccination rates, should have clearly been a first option.

That said, the Palestinian Authority has certainly ridiculed itself over the vaccine dispute. After voicing opposition to Israel’s withholding of vaccines from the Palestinian population, the PA proceeded to vaccinate 10 percent of the privileged instead of prioritizing frontline healthcare workers and the vulnerable, going as far also as to send vaccines to Jordan following a request from the Royal Court. The action was not undertaken due to surplus, but rather a vivid example of the PA’s disregard for the Palestinians’ health welfare.

The Palestinians deserve better. Instead, they are faced with Israel’s renewed effort to persuade the countries it helps procure vaccinations for, to move their embassies to Jerusalem as a reciprocal gesture. The PA, on the other hand, lives up to the name it has carved for itself in terms of corruption, ignoring the drive behind Israel’s latest humanitarian diplomacy and embarking upon its preserving its hegemony while under the illusion of cementing allegiances with countries that have already fostered economic ties with Israel, anyway. This in the aftermath of the Abraham Accords, which suspended annexation until a convenient date and seeks to permanently alter the remnants of Arab support for Israel.

Read: The Vaccine Nationalism Craze Is on the Rise Globally

As usual, the PA fails to make the connections. But Israel’s venture in Latin America is not merely tied to the coronavirus pandemic. It is a planned strategy – one that utilises humanitarian aid in the same way Israel has already applied to other countries, and which will not raise any objections within the international community. After all, abusing of data protection for a greater good, or a greater corruption, has long been normalised, and world leaders will not stand against Israel as it provides the much needed date for Pfizer and the vaccine drive worldwide.

In terms of the Palestinian people and Jerusalem, perhaps the PA has forgotten its initial calls for mobilisation against the Trump administration’s unilateral decision to declare Jerusalem as Israel’s capital. The vaccine procurement is just one sliver of the wider scenario. While the PA mismanaged its first procurement and turned itself into the laughing stock of its own people, Israel made diplomatic inroads based upon earlier foundations. A cause for indignation indeed, for the Palestinians to have a leadership that calls foul over Jerusalem only for a temporary limelight, while slinking back to the diplomatic shadows and allowing Israel monopoly over both vaccines and the capital city.