While cultural racism and Islamophobia invade all corners of Europe, New Zealand Prime Minister Jacinda Ardern’s tone in the face of the odious massacre touched the hearts of Muslims. 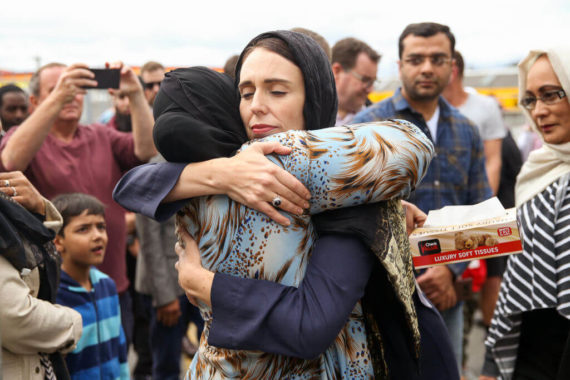 Only a few weeks ago, a sporting goods retailer’s launch of a sports hijab stirred great controversy among key politicians of all spectrums in France, including the president’s spokesperson. Through the hijab, all Muslim women wearing hijab, actually all Muslim people, were demonized – just like the time when the French police arrested women wearing hijab on French beaches. Just like the time when philosopher Elizabeth Badinter said that those designing clothes for Muslim women are not French and called to boycott a number of British, Italian and American brands, saying shamelessly in an interview, “don’t be afraid to be called Islamophobic.”

As a journalist who returned to Turkey in 2009 after spending 17 years in France during the time when the idea of a multi-cultural Europe reached a peak, I am scared of the atmosphere currently prevailing in the country.

Muslims are not only demonized but also explicitly targeted today, as can be seen in many instances including the writer Micheal Houellebecq’s book Soumission (Submission) and his numerous controversial statements such as Islam is the dumbest religion of the world, reading Koran is despicable, and his wish to invite the French to a civil war to cleanse Muslims. In a country like France, which has a large Muslim population due to people coming from former colonies that were exploited by Europe for years, President Emmanuel Macron this year awarded Houellebecq the Légion d’Honneur, France’s highest distinction medal (Zemmour was also previously awarded). If such awards are really given for the sake of literature and style, then Goebbels was a master of propaganda. He made a perfect propaganda and convinced Germans to adopt Nazism, leading to the Holocaust.

As a journalist who returned to Turkey in 2009 after spending 17 years in France during the time when the idea of a multi-cultural Europe reached a peak, I am scared of the atmosphere currently prevailing in the country. In the 19th century, could it be imagined in Emile Zola’s country that people would be sent to gas chambers and murdered in genocide for being “Jewish” 50 years later? Unfortunately, it happened. And lately, it turned out that one of the perpetrators of the recent massacre in two mosques in New Zealand, the country which boasts diversity and peaceful coexistence of different cultures, was inspired by a French, namely Renaud Camus, as can be inferred from his 75-page manifesto.

Camus’ book Le Grand Remplacement (The Great Replacement), which introduces a theory based on the view that immigrants will occupy Europe and displace Europeans, is a famous book since 2011. As journalist Edvy Plenel wrote 4 years ago, “Le Grand Remplacement was theorized by Camus, fictionalized by far-right writer Michel Houellebecq and sensationalized by far-right writer Eric Zemmour.” We also need to remember the contributions of renowned philosopher Alain Finkelkraut in spreading these ideas! While cultural racism and Islamophobia that are spearheaded by France and followed by the Netherlands, Austria and Belgium invades all corners of Europe, New Zealand Prime Minister Jacinda Ardern’s tone in the face of the odious massacre touched the hearts of Muslims.

For the first time in years, a prime minister turned to Muslims and said “we are you”

For the first time in years, a prime minister who can categorically be classified as Western albeit not geographically, turned to Muslims and said “we are you.” She wore a hijab, an object of hatred and grudge for the West, and paid visits to the Muslim community. Following the terror attacks on two mosques on March 15, she announced that the Friday azan would be broadcast live on state radio and television across the country, and there would be two minutes of silence to commemorate the victims while all women in the country were invited to wear the headscarf to display solidarity. She opened her parliamentary speech by using the Arabic greeting “Al-Salaam Alaikum,” and said “He is a terrorist. He is a criminal. He is an extremist. But he will, when I speak, be nameless. […] He sought many things from his act of terror, but one was notoriety – that is why you will never hear me mention his name.” She also implored people to “speak the names of those who were lost, rather than name of the man who took them.”

In defense of the targeted Muslims and other immigrant communities, Ardern said: “We are a proud nation of more than 200 ethnicities, 160 languages […] You may have chosen us — but we utterly reject and condemn you.”