The new Israeli curriculum contains pro-Israel content that negates the Palestinian history in Jerusalem and calls for normalization. 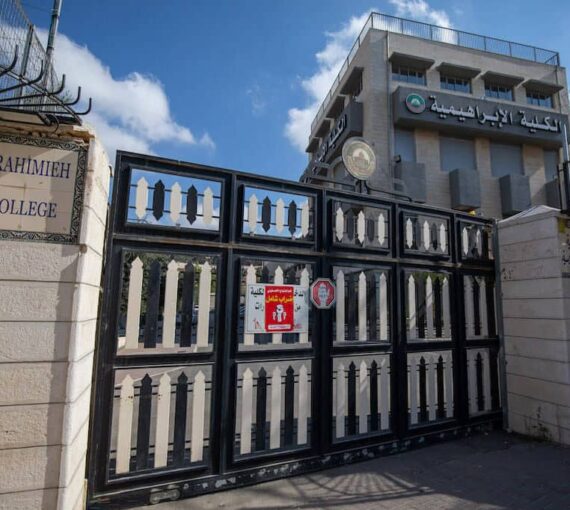 alestinian schools in Jerusalem went on a strike on Monday, September 19, 2022, over an Israeli plan to impose an Israeli curriculum to be taught in the occupied city. The strike came in response to the call by Palestinian political parties in the city.

The new Israeli curriculum contains pro-Israel content and narrative that negates the Palestinian presence and history in the city and calls for normalization with Israel.

The Palestinian News & Info Agency (WAFA) has quoted Palestinian figures in the city as calling on Palestinians to “reject all attempts to impose a fake [Israeli] curriculum on students.”

Meanwhile, Palestinian factions and parents have issued a statement urging schools to commit to the strike. The strike is the first of its kind and came after a number of sit-ins that refused the Israeli plan to impose a curriculum on Palestinian schools in Jerusalem.

The statement read, “We affirm our absolute and complete rejection of attempts to impose a false or updated curriculum on our children in all schools and academic levels. We will not accept anything but the Palestinian curriculum for educating our children.”

The statement went on to say, “We affirm our inalienable right as a people under occupation to choose the curriculum that is taught to our students. We call on relevant international bodies to stand up to their responsibilities and curb the occupation and to protect our educational institutions.”

The Palestinian Teachers’ Syndicate has refused the newly imposed Israeli curriculum in the city, calling on all teachers and schools to commit to the strike.

In the same context, the syndicate noted that “the strike is a rejection of the attempt to impose the distorted Israeli curriculum on our people inside Jerusalem and in support of the use and teaching of the Palestinian curriculum, which is part of our religion, history, and identity.”

The Head of the Islamic Supreme Council in the occupied city of Jerusalem, Sheikh Ikrima Sabri, said in a statement, “The Palestinian people fight against the Israeli occupation has not stopped, and now it is trying to impose the Israeli curriculum on our children in Jerusalem, and our position since 1967 has not and will not change by rejecting any curriculum that contradicts our religion and our beliefs.”

He added, “We value the students’ families’ position by declaring a school strike, in rejection of this curriculum, and in order to preserve the Palestinian curriculum. We call for participation in all activities that reject the occupation’s plans to Judaize Palestinian education.”

Since Israel occupied East Jerusalem in 1967, Israeli governments have been imposing regulations and laws that aim to deprive Palestinians of their own history in the city including laws to change names of locations and streets.

Violations in Jerusalem on the Rise

There are different types of schools in Jerusalem that Palestinians attend including those run by the Islamic Waqf, private schools, the United Nations Relief and Works Agency for Palestine Refugees in the Near East (UNRWA) schools, and those run by the Israeli municipality itself.

Palestinians in Jerusalem see themselves as a natural extension of the Palestinian society and refuse Israel’s plans to push them out or impose new laws and regulations on them.

Additionally, Israeli violations against the Palestinians in Jerusalem have increased since former U.S. president Donald Trump recognized Jerusalem as Israel’s capital and moved the U.S. embassy there in May 2018. This includes house demolitions, imposing higher taxes and fines on Palestinians in Jerusalem, arrests, provocative protests by right-wing Israeli settlers, and incursions at Al-Aqsa Mosque.