There is no country in the world compelled to proclaim that a specific city is its capital the way Israel does with Jerusalem, which is telling. 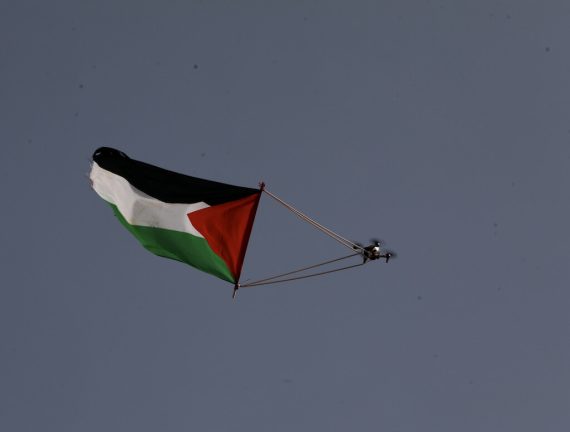 A drone, carrying Palestinian flag is seen as Fanatic Jewish settlers gather around Damascus Gate in East Jerusalem for the "Flag march" on May 29, 2022 in Jerusalem. Photo by Mostafa Alkharouf, Anadolu Images

On May 29, some 25,000 Israeli settlers held the annual “flag parade,” a protest, or dance as they call it, that has been held over the past 30 years to mark the “unification of Jerusalem.” In Israeli terms, this means the occupation of East Jerusalem following the Six-Day War in 1967 after occupying the western part of the city in 1948. In Palestinian terms, it is an occasion to mark the occupation of Jerusalem which hosts a number of Islam’s and Christianity’s holiest sites. The protest has gained more political meaning over the years with far-right Israeli settlers marching through the Muslim Quarter and attacking Palestinians and their property.

In reality, this protest reveals Israel’s lack of sovereignty over Jerusalem, which it calls its “eternal capital” and which a number of governments have chosen to recognize as its capital city. After all, it is not governments but Palestinians on the ground in Jerusalem who determine the course of action and the meaninglessness of such recognitions, and these Palestinians are not going to disappear. In fact, their numbers are increasing by the day.

There is no country in the world that is compelled to proclaim that a specific city is its capital the way Israel does with Jerusalem—this, in fact, reveals that Israel feels otherwise and that facts on the ground contradict this Israeli claim. One would be hard-pressed to find a statement that Algiers is the capital of Algeria or Baghdad is the capital of Iraq by an Algerian or Iraqi official. What compels Israelis is the feeling that 54 years after the occupation of the city in 1967, their plan to take over Jerusalem, especially the eastern part which hosts Islam’s third holiest site, Al-Aqsa Mosque, and Christian holy sites such as the Church of the Holy Sepulcher, has largely failed.

The fact that Israel mobilized 3,000 of its border guards, armed to the teeth to attack any Palestinian presence near Damascus Gate speaks of this lost sovereignty. A normal country that claims sovereignty over a city does not need this huge number of security forces to secure a three-hour parade through its “eternal capital.” Israeli settlers, including members of the terrorist Kach group, which the U.S. recently took off its terror list despite still being listed as terrorist by Israel itself, took part in the so-called parade.

Read: 103 Years since Jerusalem’s Capture: Britain Is Responsible for the Plight of the Palestinians

Palestinians, on the other hand, despite Israeli brutal force and military presence across the Old City, which included shutting down Palestinian shops and arresting any Palestinian who appeared near Damascus Gate, organized a protest where they carried Palestinian flags. A big Palestinian flag was flown over the Old City using a drone as Israeli settlers marched and chanted their well-known “Death to Arabs” chants.

A total of 55 Palestinians from Jerusalem were arrested while not a single Israeli was taken into custody for assaulting Palestinians, assaults that were well documented on cameras. In fact, the Israeli chants should send worrying messages to the whole world, but instead they go almost unreported in Western media, or, as usual, are reported as clashes or riots that happen in the context of “both sides” fighting each other.

The most well-known Israeli settler chant during protests in Jerusalem is “Death to Arabs,” which they make in reference to Palestinians, who they even refuse to recognize as a nation, but rather insist on thinking of as a “bunch of Arabs who came from different Arab countries.”

Ironically, many Arab governments today are racing against time to normalize ties with Israel and its government, led by settlers such as Bennet, whose favorite chant is “Death to Arabs.” Another chant is “May your village burn”—yet another death wish aimed at Palestinians. Another still says, “Shufat is on fire,” referring to kidnapping, torturing, and forcing Palestinian child Mohammad Abu Khdair from the town of Shufat in Jerusalem to drink gasoline and burn to death in 2015.

What makes these Israeli settler provocations extremely dangerous is the participation of Israeli politicians such as Benjamin Netanyahu, Itamar Ben-Gvir, and others, who seize the opportunity to gain more votes from the far-right base, which now tends to be more open about their perception of settlements and settlers. Israeli settlers, for the first time since the occupation of Jerusalem in 1967, have raised Israeli flags at Al-Aqsa and performed biblical rituals inside the mosque, which is unprecedented in the city’s history. As Israeli policies in the past have shown us, this is testing the waters before making it an official Israeli policy, which in turn will lead the region into the unknown, sparking a religious war.

Meanwhile, Israeli settlers attacked Palestinians in the Sheikh Jarrah neighborhood, which was the spark of an 11-day war between Palestinian factions and Israel in May last year over Israeli plans to forcibly evict and displace Palestinian families from their houses. What is no longer surprising is that Western media rarely, if at all, cover such scenes of Palestinians being assaulted or Israeli settlers chanting “Death to Arabs.”

Instead, they try to present these settlers as peace-loving people. Yet, their violent and disturbed chants and behavior would cause distress and disgust to any logical person with a sense of moral integrity! God forbid that any violence perpetrated by anyone other than Palestinians deserves media attention!

The fact is that Israel has been designed as a state for settlers run by settlers. Palestinians have been living with Israeli settler violence for decades, and the silence of much of the world has allowed this to happen. The world turns a blind eye to Israeli settlers’ violations against the Palestinians.

The more Israeli society moves towards the far right (which now reached record levels), the more likely things will get out of hand, and it is unlikely that Palestinians will stand and watch as Israeli settlers implement the threats present in their chants and burn another Palestinian child or village, or uproot an entire olive grove. The world has to act before it is too late because Palestinians are not going to disappear, and their presence on the ground is integral to the true sovereign Jerusalem.