Kemalism is Over, Long Live Opportunism!

Over the course of the past seven years, Kilicdaroglu’s CHP differed from former party leader Deniz Baykal’s CHP in this aspect: “What is social democracy? Kemalism is over, long live opportunism!” 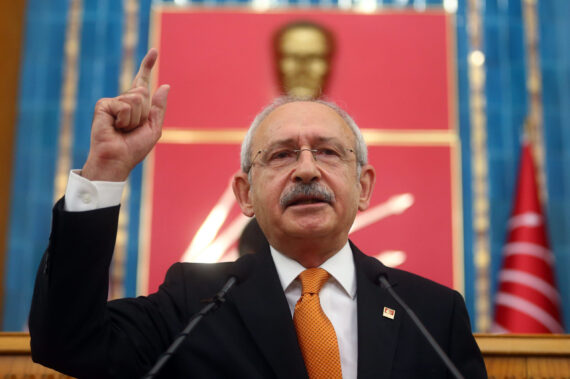 Kemal Kilicdaroglu, Chairman of the Republican People's Party (CHP) makes a speech during his party's group meeting at the Grand National Assembly of Turkey (TBMM) in Ankara, Turkey on April 3, 2018. Anadolu Agency

11 years ago, during this time of the year, the Justice and Development Party (AK Party) leader and then Prime Minister Recep Tayyip Erdogan declared his party’s presidential candidate as “My brother, Mr. Abdullah Gul.” Kemalists poured into the streets with flags in their hands upon the announcement. The daily newspaper Cumhuriyet started a campaign with the slogan “Are you aware of the danger?” They organized “Republican rallies” across Turkey, which set off in Ankara on April 14, 2007, continued in Izmir and Istanbul, and ended in Samsun. The rallies lasted for weeks. An observer viewing how they waved their flags might have easily assumed that they were revolting against a foreign invasion. The protesters were asserting that Abdullah Gul could not occupy the presidential seat as his wife was wearing headscarf, an unspeakable “thing” for Kemalists.

Turkey was under military tutelage at the time. So, the judicial and political bodies of this system cooperated with the main opposition Republican People’s Party (CHP) to bar Gul’s presidency with the threats of staging a military coup. Led by a judicial member, they showed a constitutional rule as an impediment to Gul’s presidency by subverting its meaning even though it was an articulate rule. They put forward the argument that “at least 367 deputies must be present in the Parliament to elect Gul,” and the CHP boycotted the election.

The Turkish Armed Forces (TSK), which staged a “postmodern” coup on February 28, 1997, released an “e-memorandum” on its official website on April 27, 2007. Their addressees received the message. A group of CHP deputies, including the incumbent party chair Kemal Kilicdaroglu, applied to the Constitutional Court for the cancellation of the elections. With a scandalous decision, the court cancelled the elections in line with the message given. For the first time in Turkey, a government did not succumb to the military’s attempt to design the politics in the country and decided to hold early elections. The AK Party had a landslide victory by receiving 47 percent of the vote share and Gul was eventually elected as President.

11 years has passed since then. Those who were then mobilized to prevent Gul’s presidency only because he was from a conservative background and his wife wore a headscarf have lately been mobilized to present Gul as a presidential candidate to run against Erdogan. Also, Gul allegedly demanded behind the scenes that he will run for presidency only if he secures the support of all the oppositional groups, namely the CHP, newly-founded Iyi Party (Good Party), the Peoples’ Democratic Party (HDP) and Felicity Party (SP). Kilicdaroglu, the leader of CHP, which is the stronghold of Kemalist and secularist tradition in Turkey, went from door to door and exerted utmost efforts to nominate Gul as the joint candidate of the opposition. He even transferred 15 CHP deputies to Meral Aksener’s Iyi Party over a legal uncertainty regarding whether Iyi Party could meet the requirements to join the elections. The 15 deputies obeyed the order of their chairman and embarked on an ambiguous path.

Akşener remarked that she considered this move of the CHP worth all kinds of appreciation. But the situation of the HDP needed to be calculated more meticulously due to the political agenda. As the HDP deputy Ahmet Turk stated, the HDP’s inclusion in the joint opposition movement will undermine the bloc during the first round, so it is formulated that the former co-chairman Selahattin Demirtas will initially be presented as the HDP candidate and the party will join the bloc in the second round. Their calculations seemed to have been completed. And after the transfer of 15 deputies, Aksener was naturally the one from whom sacrifice was expected. Along with Temel Karamollaoglu, the leader of the SP, the late Necmettin Erbakan’s party who received 0.50 percent of vote at the latest election, Kilicdaroglu asked Aksener to waive her candidacy. But Aksener, known to be a politician driven by her ambitions, responded “absolutely no” to this offer. Thus, the joint opposition bloc they strived to build eventually collapsed on the CHP. The party was confronted by chaos when the names inside the party and among the party base raised their voices since they opposed to Gul’s candidacy.

Kilicdaroglu started looking for a new candidate for Turkey, which will be governed with a new governmental system following the June 24 elections. According to the CHP Deputy Group Chairman Engin Altay, they will announce their candidate between May 1 and 5. According to another statement issued by the party, the main criterion they look for in a candidate is definite although there is not any certain name yet. “A candidate to drive Erdogan mad,” as they put it.

While rushing to present Gul as their candidate, the main opposition party resigned to the sociological reality of Turkey. But as always, it pursued an opportunistic path instead of revising itself in view of sociological realities and issues on Turkey’s agenda, just as they made a strategic partnership with the HDP in 2015. As a result, over the course of the past seven years, Kilicdaroglu’s CHP differed from former party leader Deniz Baykal’s CHP in this aspect: “What is social democracy? Kemalism is over, long live opportunism!” As for Gul, there remains no need to write about his position.