Reasonable left-wing supporters should start questioning the current trajectory of Turkey’s traditional nationalist leftist bloc and its political stance which is heading towards self-dissolution in the long run. 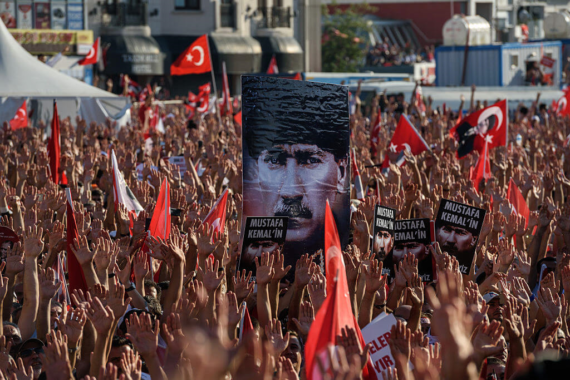 Demonstrators rise their hands and hold a potrait picture of Mustafa Kemal Ataturk, founder of modern Turkey, as they gather at Taksim Square in Istanbul on July 24, 2016. Getty Images

For those who did not hear about it until now, most likely due to the fact that foreign media are not covering such news that parents, whose children were kidnapped and forcefully recruited by the PKK terrorist organization, launched a civil resistance in front of the Peoples’ Democratic Party’s (HDP’s) Diyarbakir Provincial Office.

Following in the footsteps of a mother who was the first to call on the HDP to bring back her son, other families soon joined the sit-in protest in front of the HPD office. At the beginning of this week, the number has increased to 18 families. It is no doubt a good sign that people of Kurdish origin in Diyarbakir, who are wrongly presumed to be natural supporters of the HDP, have increased their active criticism of the PKK. Of course, the Turkish security forces’ active fight against the PKK in the last couple of years in particular and the actual state authority may be also counted as a reason for the recent resistance. Many Kurdish families are now more confident to stand up against the PKK and their political affiliates to protect their children.

In such circumstances, the usual tactic of the HDP, a political party which is based on Kurdish nationalist and separatist aspirations, is to play possum. They did not address this challenge by the families, closed the doors of their Diyarbakir office, kept silent regarding the accusations made by the families, and instead only referred to their requests as a “provocation”.

It is the method of HDP members to not to address accusations when it involves harsh criticism against the PKK’s terrorism and crimes. By this, though, the HDP indirectly confesses its clear relation to the PKK and does not openly deny it. For all readers abroad and who perhaps need a refresh; the PKK is classified as a terrorist organization in the EU and the US despite the lack of will to fight against them in both.

Although it is a puzzle worth considering why foreign correspondents and the broader Western media, who usually cover incidents in Turkey in great detail deliberately disregarded the current events in Diyarbakir, the main focus of my discussion is on the puzzle of why well known Turkish personalities stood silent regarding the current incident in Diyarbakir – both on social and conventional media.

Constantly failing to criticize and oppose to the PKK’s forcible recruitment in order to achieve short-term goals will lead Turkey’s traditional secular left nowhere in the long-run.

Before addressing the potential preferences of these well-known personalities, a clear distinction between different kinds of leftists in Turkey should be made. There is a difference between left-wing oriented people who openly sympathize with Kurdish leftist-nationalists, Kurdish Marxists and open PKK supporters of Kurdish origin, on the one hand, and the traditional secular-left Kemalists, on the other. Traditionally the secular-left Kemalists have maintained a strong nationalist approach that ruled out separatist support.

However, younger Kemalist youth are not following the traditional nationalist stance of the earlier generations and are espousing a softer tone against Kurdish separatists for pragmatic purposes. Consequently, the borders between these two camps are becoming more blurred. Given this ongoing shift, Turkish artists, writers and ‘thinkers’ who have long positioned themselves as traditional secular-left-Kemalists, are now preferring to either keep silent or openly support HDP friendly discourses in general.

Of course, a comprehensive assessment and analysis of this fundamental shift goes beyond the borders of this column, though my initial guess about this socio-political development is that there appears to be a strange concern among left-wing oriented people and its younger generation of being stigmatized as an AK Party sympathizer. In particular, the leading figures of the left-wing bloc are blinded by a prejudiced mentality that it has shifted their behavior, leading them to stay silent even towards the PKK’s crimes. Consequently, it is a phenomenon which deserves further academic research. What has led certain leftists to remain silent and reject responding to a significant criminal and humanitarian problem as was highlighted in the recent Diyarbakir resistance?

Under these circumstances, particularly reasonable left-wing supporters should start questioning the current trajectory of Turkey’s traditional nationalist leftist bloc and its political stance which is heading towards self-dissolution in the long run. Romanticizing a political party by ignoring its affiliation with a terrorist organization will undermine Turkey’s main left-wing bloc and its supporters’ trustworthiness. Constantly failing to criticize and oppose to the PKK’s forcible recruitment in order to achieve short-term goals will lead Turkey’s traditional secular left nowhere in the long-run.

Also Read
Deliberate Misunderstandings Regarding the Republican Character of Turkey