Trump needs to show the Saudi Crown Prince the errors of his ways before it’s too late. And Yemen would be a good start for him, MbS and the American media to redeem themselves. 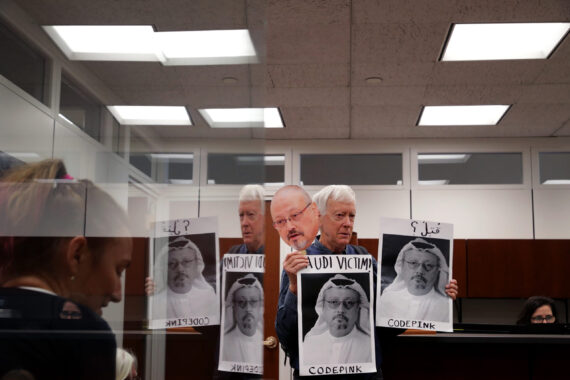 Women for Peace activist David Barrows joins about 17 other protesters to demonstrate against U.S. involvement in the Saudi-led war in Yemen in the offices of Sen. Jack Reed (D-RI) in the Hart Senate Office Building on Capitol Hill October 22, 2018 in Washington, DC. Getty Images

The Americans are nervous that the UN will accuse them of human rights violations in Yemen and so should take a stand against the Saudis there. They can start with ending the Saudi travel ban on journalists.

Did Trump really tweet about the ‘cover up’ of the Khashoggi murder in such a manner, that it appeared he derided the amateurism of those carrying out the ghastly killing? It’s almost as though he is saying if the Saudis had paid him a decent wedge, that his own people could have done the job much more professionally.

Far fetched? Perhaps. But the horror story of despot getting into power in the White House and giving his Gulf Arab oil sheikh friends in the Middle East the green light to flex their muscles and behave badly – really badly – is not. It’s a reality which we are all living with as America is forced to re-examine its relations with Saudi Arabia whose benighted 33 year old Crown Prince has shown the world a glimpse of the brutality which is carried out habitually to anyone who dares to think. Just to think. Mohammad bin Salman cannot take any kind of comment or even humble advice from even those in his own court and is running Saudi Arabia along fierce, autocratic lines, which is expected of him, from his peers.

We shouldn’t be so shocked about Khashoggi who was only one of many who were renditioned and it is only down to the sensational amateurism of MbS’s henchmen – and the current Turkish investigation – that we know all the gory details.

But it isn’t so much the murder itself, but more the abysmal, half-cocked effort to cover it up which has spurned a broader morality check from Western governments, with Germany taking the initiative to block its own arms sales to the Gulf Arab kingdom. The wholesale impunity afforded to the Saudi Prince, via Trump’s absurdly inexperienced wannabe something son-in-law Jared Kushner, has resulted in the derailment to attention, to Saudi Arabia’s nefarious techniques in governing; or rather preserving the existence of its elite, the Saudi royal family, which the British enshrined during the first world war as they created a cluster of clients states in the Middle East whose very existence was based on their savagery, lack of trust of one another and reverence to the colonial model.

Indeed, T E Laurence, a polemic loner and somewhat awkward British serving officer said of the Saudis and their neighbors “The Arabs are even less stable than the Turks. If properly handled they would remain in a state of political mosaic, a tissue of small jealous principalities incapable of cohesion.”

The House of Saud was favored by the British for this reason and, not withstanding its savagery and reputation to never take prisoners as it swept across the (then) fractured country, its firebrand leader united a vast country, what is known as Saudi Arabia today. But there came a price. Wahhibism – a uniquely crafted interpretation of Islam not entirely unlike what Daesh practices against its non-believers – was also seen as a strong point, much later, after the second world war, where it was seen as a shining counterweight to the rapid expansion of communism. But the price the British paid then was savagery. And it’s the price that Trump is now paying with the Khashoggi attempted rendition and many like his.

Does the young prince believe he is more modern than his ancestors as he at least gives his enemies a chance to repent and to return to the kingdom? Khashoggi was a traitor. He had lived a rich and prosperous life as a devoted surf of his Saud rulers. He gained their trust and respect. They shared all their secrets with him over thirty years until the day he decided that he wanted to not only leave their propinquity, but to also use that privileged inside information against them to gain their respect and attention – but in so doing, possibly destroy them.

When President Erdogan of Turkey referred in his own parliament to the “Political killing” of Khashoggi, no western journalists picked this up, but his own parliamentarians knew what he meant. Khashoggi was a Muslim Brotherhood supporter – an organisation which the Saudis hate more than even Iran – and he was hoping to set up a TV channel in Turkey, a country which is aiming to take for itself more hegemony in the region, directly out of Saudi Arabia’s hands. The murder was not only a message to Saudi dissidents, but also to Turkey’s leader: don’t think you can ever get away with a stunt like that.

Yet the murdering and rendition itself is nothing new. MbS had been doing this for well over a year, detaining and murdering anyone who he feared might dare to comment on his ideas, let alone present himself as a threat to his tumultuous leadership. But it took the Khashoggi affair to gain the attention and imagination of the world’s media. It was like he did this to one of ours.

Although the West, neither today nor historically, cares not about such atrocities as long as they are kept from the weary eyes of its media or politicians who fear that this ugly proximity to Arab brutality might affect them getting re-elected in the age of Twitter. And the media in the U.S. (and U.K. also) is more guilty for one small, but important detail which Trump’s own support base should care about.

If Western media, and in particular the left leaning Washington Post isn’t guilty for sending its Saudi columnist to his death when they agreed to his articles being published in Arabic, they are certainly guilty for allowing Trump to let the Saudis get away with what they are doing in Yemen – a war and subsequent famine which befits no superlatives in the English language in its biblical level of cruelty and rancorous savagery.

Saudi US-made jets pound these poor people who, skeletons who resort to eating leaves, have no energy to run when they see the jets coming. World records are made everyday with infant mortalities as parents leave their frail babies in the hospital and don’t turn around as people starve – not due to lack of food but money to buy it.

With up to 100,000 dead so far and a contingent of Congress members eager to show Saudi Arabia it has to adapt to Washington rules, there has never been a better time to push for the end of the war in Yemen – which is largely a by product of America over selling the Iran threat to insecure Saudis who are addicted to US arms sales. Saudi Arabia loses 50bn dollars a year in Yemen.

The repugnant reality of the relationship between Washington and the Saudis is that it is western jobs and morally bankrupt politicians who are procuring the justification to sell arms to the Saudis. And the media is part of that collusion.

The Khashoggi murder and all its wretched detail has garnered a momentum of consciousness and probing, probably for all the wrong reasons. But how can we live with ourselves if we are to turn a blind eye to thousands dying in Yemen, who are certainly less worthy of their fate than a merely one journalist with grandiose ideas about his career?

Most western editors who have the power to cover Yemen chose not to, as they know that if the U.S. business being done with the Saudis is seen in all its glory with its southern neighbor, it’s not going to score them any points with White House and State department mandarins and, in this era of high lay offs in the newsroom, might even cost them their jobs. But there’s another reason which is far more shameful and leaves us all with blood on our hands.

The Saudis for quite some time now impose a travel ban on western journalists wishing to work in the north of Yemen, where the real story of humanitarian calamity can be captured. Saudi Arabia does not issue journalists with special visas to enter the country. It is this rule, which western media largely complies with – and respects – which should be now at the heart of politicians zealous consciousness as they wrangle with the Saudi question.

How can the Trump administration accept such an arrangement when Yemen is a sovereign state and not a protectorate of Riyadh? When will journalists who sit in each day at Washington press conferences put their hands up and ask the ex Fox moronic press mannequins, the simple question “why does President Trump allow such a rule which prevents us from traveling to Yemen to report there?” The British may have created the house of Saud and planted the seeds for their present day savagery, but it will have to be American journalists who will stand up and stop Trump keeping such traditions alive.

John Cusack, the American actor, may be right about Trump being mentally ill. It’s not important. What is important is that Trump acts now to pull this ruling Saudi family out of the middle ages and convince them that the historical ‘no prisoners’ rule of their ancestors is no longer conducive with the modern world and that the West no longer considers them an asset when they continue to divide the middle east along outdated British imperial lines. Trump needs to show the Saudi Crown Prince the errors of his ways before it’s too late. And Yemen would be a good start for him, MbS and the American media to redeem themselves.