KRG steps back: “We respect the court’s decision”

On November 6, Iraq’s Supreme Federal Court issued a decision that the country’s constitution which indicates the Republic of Iraq as “a single federal, independent and fully sovereign state” does not allow for the secession of any part of the country from the Iraqi state. 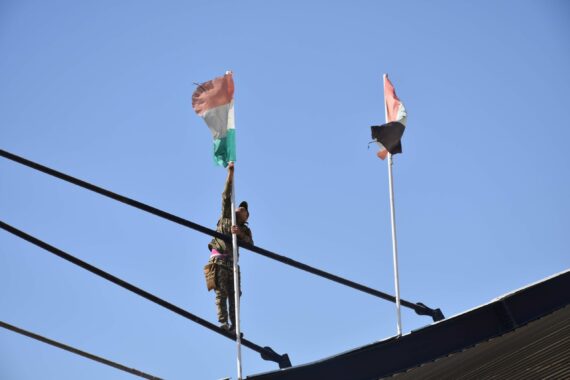 A federal police officer hauls down the flags of Iraqi Kurdish Regional Government (IKRG) at the June 1 Control Point in Kirkuk, Iraq on October 16, 2017. Anadolu Agency

On November 6, Iraq’s Supreme Federal Court issued a decision that the country’s constitution which indicates the Republic of Iraq as “a single federal, independent and fully sovereign state” does not allow for the secession of any part of the country from the Iraqi state.

“We believe that this decision must become a basis for starting an inclusive national dialogue between Erbil and Baghdad to resolve all disputes, through implementation of all constitutional articles and in a way that guarantees all rights, authorities and status mentioned in the Constitution, since this is the only way to secure the unity of Iraq, as Article 1 stated” the KRG said in a statement.

The controversial referendum held by KRG on Kurdish regional secession, was considered illegitimate by Baghdad as well as by regional and global actors.

Last month, the Iraqi National Security Council announced that legal proceedings have been initiated on those who carried out the illegitimate referendum.

It was stated that the civil servants who carried out the referendum in the KRG were identified and “legal proceedings” had started.

Many regional and international actors criticized the purpose and timing of the referendum, in apprehension that it would distract Iraq from the ongoing fight against terrorism and further destabilize the region.

Iraqi government forces moved into several disputed areas between Baghdad and the Erbil-based KRG, including the oil-rich Kirkuk province, in the weeks following the poll.

Also Read
Erbil Conference on Normalization with Israel Stirs Debates
We use cookies to optimize your online user experience. To learn about our use of cookies and how you can manage your cookie settings, please see our Privacy Policy. By continuing to use our site you are excepting our use of cookies.Accept Cookies & CloseMore Info