"The western media portray all Kurds supporting the PYD. But Kurds are diverse. There are different parties, independent politicians, leftists, religious conservatives, etc." 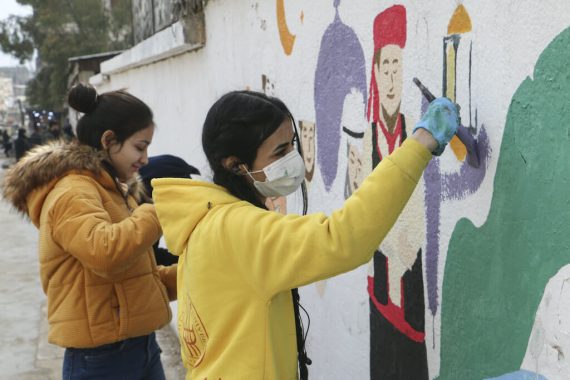 A group of Kurdish and Arab children take part in painting activities on the walls of Afrin in Northern Syria. In the recent years, thousands of people have returned back to the city. Photo by Saher El Hacci, Anadolu Images

Syrian Kurds who fled Afrin in 2018 with the YPG/PKK are now returning to Afrin from the Shahba region, controlled by the YPG/SDF, and the Syrian regime-held Aleppo and Erbil.

Kurds massively fled Afrin when the Turkish army and the Syrian National Army (SNA) first entered the district at the beginning of 2018. However, according to the Independent Kurdish Coalition of Syria (KKS), more than half of the Kurds who fled from Afrin to Tel Rif’at and villages in the Shahba area and Aleppo have returned.

An estimated 151,000 Kurds had fled the area according to the UN in 2018, more than half of them returned and most of them did so within four months of fleeing. “When people realized the brigades that came to Afrin were not jihadists, unlike the PKK media had been telling them, they started to return. It’s better to live in your own house, even with some trouble than staying in a tent,” KKS members explain.

On the other hand, at the beginning of 2016, an estimated 100,000 Arabs had fled from the Arab town of Tel Rif’at and its surroundings after the YPG/PKK took control of the area with Russian air support. However, none have been able to return to their home as of yet.

According to the KKS, which aids the Kurds return, the PYD, the political wing of the YPG obstructs their departure. In recent months, there has been a rise in the number of returnees to Afrin. Members of the KKS state, “The ones who fled together with the YPG to the Shahba region have to pay a bribe to be able to return.” They go on to say, “Of course, the bad behavior of some SNA groups is also not encouraging, but the situation has improved from the chaos in 2018, since the local Kurdish councils have been installed there.”

Azaad Osman, KKS chairman in Afrin, works with Ahmad Misto, a Kurdish leader of al-Jabha al-Shamiya, the largest SNA brigade. “We first tried to prevent people from leaving Afrin, then we organized big convoys to bring people back to Afrin in 2018. We help civilians who face problems here,” Misto says.

The KKS office is a central place in Afrin for Kurds asking for help. I visited the office several times in October 2021 and I saw this firsthand. Azaad Osman is also on the PKK’s hit list, and was imprisoned by the Assad regime for five years in the notorious Sednaya Prison. He used to have a business in Turkey and returned from there in 2018 after the PKK’s removal.

I met more Kurdish businessmen who had to flee because of the regime or the PKK pressure, and who returned to Afrin in 2018 following Turkey’s military operation. The head of the local council in Afrin, Said Sulayman, is one of them. His family still resides in Turkey. “I still have business in Turkey. We, a group of people from the area, came back to serve people here. The western media mistakenly think that all Kurds support the PYD. But Kurds are diverse. There are different parties, independent politicians, leftists, religious conservatives, the Kurdish National Council (KNC), and the PYD. The PYD is only a part of the Kurds.”

Al-Jabha al-Shamiya leader Misto survived four PKK/YPG assassination attempts. He was even declared dead by some Kurdish media outlets. On one occasion, on June 8, 2018, the website Enabaladi and Iraqi-Kurdish Rudaw wrote that Misto had been assassinated.

If one wants to return to Afrin, there is a short but expensive route from the SDF-controlled area via Kemar, which costs $2,000 per person. There is another cheaper route via the regime-controlled area and checkpoints to Tabqa and then via Manbij through the small Sajur River to SNA-controlled Jarabulus. “This route costs $250 per person plus the bribes at the checkpoints,” say Kurds who recently returned to Afrin via this route.

During my latest trip in October 2021, I had a chance to talk to Kurds who took the short, expensive route and some who took the longer but cheaper one. They told me: “Kurds in the Shahba area, between Afrin and Aleppo, who don’t have the financial means to return, can’t do so. They are, for example, farmers, and need to cultivate the land to have an income.” They warned, “The short route via Kemar is long and steep. It’s impossible for elderly people.”

“I consider the PYD/YPG the enemy of the Kurdish people due to their inhumane actions against us such as kidnapping children and forced military conscription.”

Misto explains why he joined al-Shamiya: “I consider the PYD/YPG the enemy of the Kurdish people, because of their inhumane actions against us – like kidnapping young children, forced military conscription, and forcing these children to join the military to fight the Free Syrian Army and the Syrian people, creating national strife in Syria.”

“I organized peaceful demonstrations against the regime and after al-Jabha al-Shamiya entered Aleppo, I joined them as a trainer, because I used to be a kung fu trainer. I trained their members until the liberation of Afrin. During and after its liberation, al-Shamiya leadership asked me to enter the Kurdish villages under their control, to support people, and offer them aid and services to open schools. I am both a son of the area and of al-Shamiya; with al-Jabha al-Shamiya, I will help the area to leave discrimination behind.”

Misto goes on to say, “Afrin was exposed to dictatorship and injustice, and we as revolutionaries of Syria are Arabs, Kurds, Turkmens, all the components. I see the Turkish intervention as the liberation of Afrin because of the YPG’s injustice towards it.”

I asked KKS members how the situation in Afrin is nowadays and was told that “it varies from area to area, from good to average to still bad.” Giving further detail about the current state of affairs, they told me, “In the areas controlled by al-Jabha al-Shamiya it is good… in the areas controlled by Ahrar al-Sharqiya (from Deir Ezzor) it is bad. Al-Jabha al-Shamiya are our neighbors, from Marea and Azaz. We have mixed marriages of Arabs from Azaz in Marea to Kurds from Afrin, for instance.”

At their headquarters outside Azaz in November 2021, Abu Ammar, one of the leaders of al-Jabha al-Shamiya, told me, “In Ma’batli, the whole population is Alawite Kurds … 95% are back. Ma’batli is under the control of al-Jabha al-Shamiya. We have 10 houses that belong to Kurds, and the owners came back.”

By now, other families are living in houses that were evacuated in Eastern Ghouta. These new inhabitants were brought to Afrin by buses. For example, they lived in tents and upon seeing empty houses for several months, they moved in. Abu Ammar adds, “So we went there and told them, “You have to leave.’” They started to organize demonstrations, claiming ‘’al-Jabha al-Shamiya wants to expel us by force” and they spoke to the media.

Rena Netjes studied Arabic and Hebrew at the University of Amsterdam. She works on Northern Syria since 2016. Writings and bylines have appeared in Parool, NRC, Newsweek, New York Times, Atlantic Council, Clingendael, Follow The Money and MENA Affairs.