If Arab tribes in Syria are united under a single platform and given the chance to open diplomatic channels, a peaceful solution could be closer to reality than many think. 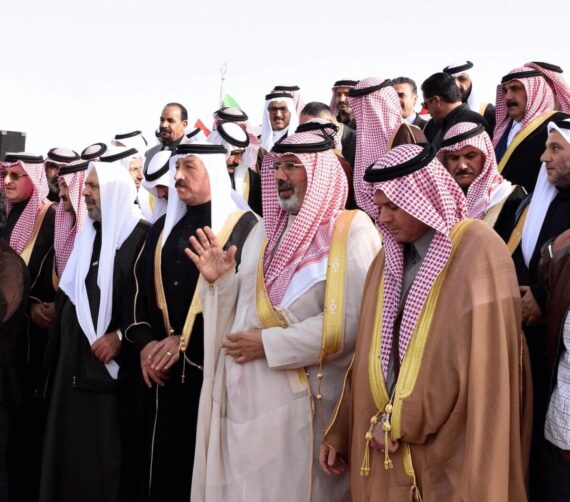 Syrian tribe leaders gather for a meeting held by the Syrian Council of Tribes and Clans as they reaffirmed their position against the PKK terror group, its Syrian wing YPG, and Bashar al-Assad regime, in Ras al-Ayn, Syria on April 06, 2021. Photo by Esref Musa, Anadolu Images.

Arab tribes in Syria are a key element of the country’s social, cultural and historic identity. During the Ottoman Empire Arab tribes had strong relations with various sultans and were given weapons and money in order to secure their loyalty. Their cooperation with the Ottoman authorities was important for securing key trade routes to the east and to manage any threats from further east.

Eventually some tribes grew too strong and were co-opted by colonial powers to help topple the Ottoman Empire. Despite their services to the west, under the French mandate of Syria, Arab tribes were marginalized and their role in society, politics, and culture was heavily censored. The French were threatened by Arab nationalist sentiment and divided Syria along ethnic lines favoring minority groups including Christians, Druze and Alawites.

In 1946 this short sighted policy became the demise of the French as they left behind formerly unified territory divided along ethnic lines and the creation of two new states: Syria and Lebanon. Subsequent competition for power in Syria played out in the form of a series of coups and some short lived presidencies.

Hafez al Assad appointed himself President in 1970 when he ousted his Ba’ath Party comrades from power; the same people he helped bring into power during two previous coups in 1963 and 1966.

Under Hafez al Assad Arab tribes were viewed as a threat and managed by recruiting tribal members into the Ba’ath Party’s ranks. Tribal members were given positions in Syria’s notorious “mukhabarat”, intelligence agencies, and used to cull the tribal communities that were for the most part far living from governance centers.

In 2011 when the Syrian revolution began fissures emerged among tribal members. Syrians from the same tribe had different opinions about the Assad family and the revolution; and those divisions were easily identifiable among the ranks of fighters and activists on either side of the conflict. When Daesh emerged on the scene, Arab tribes were the first target for both the Assad regime and Daesh.

On the one hand Daesh insisted that the tribes should join the fight and revive the stolen glory of their ancestors while the Assad regime claimed the Arab tribes should cleanse their ranks of blasphemous Arabs that cooperate with Daesh and the opposition.

This tumultuous history of competition over the good graces of Arab tribes in Syria has resulted in a fractured social stalemate.

Even though they’re related they don’t agree on politics. The same can be said about many other tribes who were represented at the recent opposition sponsored tribal meeting. Nearly every one of the tribes has relatives which are operating in coordination with Russia, Iran, the Assad regime or the US backed YPG terrorists.

In Raqqa, another Arab tribe, Albuhamad, are also backed by Iran and are headed by Turki Albuhamad under the banner of the Tribal Fighting Force. They also coordinate closely with the YPG terror group’s so-called “Syrian Democratic Forces”. The participation of Arab tribes is an important ethnic card that the YPG and America both use to give credibility to their allegedly tolerant and multi ethnic autonomous governance project.

Iran and Russia are also competing to co-opt Arab tribal militia groups including the Al Maghaweer Militia which is made of members of the Tay Tribe. They are present in Hassaka province and operate under the auspices of the pro Assad Russian backed National Defense militia. But they also receive support from Iran.

The Iranian and Russian backed tribes operating in YPG controlled areas are the Assad regime’s proverbial hand in the pot and the reason why Iran and Assad continue to have a significant influence on local politics in America’s zone of influence in north east Syria.

The tensions between these pro Assad Arab tribes and the YPG boiled over recently and tribes demanded that a separate court system be set up to deal with issues related to the Arab tribes. They believe that the YPG’s form of justice is inadequate and unfair to the interests of the Arabs and their tribes.

Iran and Assad are not only working to improve their relations with the Arab tribes in YPG controlled areas but also in areas under the Assad regime’s control. Last December Iran hosted a meeting of Arab tribal leaders in Tehran that arrived from Damascus. The aim was to convince the Arab tribes to cooperate with Iran against the presence of American troops and the YPG terror group east of the Euphrates.

To some extent the Assad backed and Iranian funded efforts have resulted in significant developments east of the Euphrates. In early April, 400 Arab tribal fighters in Qamishli graduated from a training course of the pro Assad Russian backed National Defense militia. Russian and Syrian military personnel as well as Assad regime bureaucrats were present at the graduation ceremony in an area that’s dominated by US backed YPG terrorists.

Even though Russia and Iran are both working to court Arab tribal members around Syria their interests are at loggerheads. Russia aims to limit Iranian influence east of the Euphrates while Iran aims to increase its presence in close proximity to American troops.

Russia and Iran are both interested in countering American presence east of the Euphrates but Russia has cashed in on the opportunity to weaken Iran’s capacity in hopes that it can secure access to valuable natural resources in northeast Syria, especially oil. Both Russia and Iran are in desperate need of a financial jolt that can help them carry the Assad regime through the economic crisis they are all suffering from due to American sanctions.

At the moment, Arab tribal members in the opposition’s ranks have little influence over what is playing out east of the Euphrates and in Assad regime controlled areas. But efforts to unite Arab tribes opposed to the presence of Iran, the YPG, the Assad regime, and Russian troops in Syria will be a critical counter force to those actors.

Arab tribes in Syria have historically played a significant role in Syria’s stability and security. If they are united under a single platform and given space to engage with their relatives in other parts of Syria through proper diplomatic channels, the possibility of clearing a path towards a peaceful resolution in Syria could be closer to reality than many think.