The Italian "La Gazzetta delo Sport" praised the Turkish President Recep Tayyip Erdogan for his contributions made to Turkish football, claiming that Turkey is a favorable candidate for the UEFA EURO 2024 Championship. 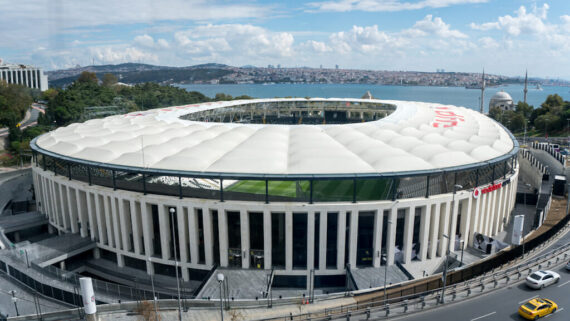 On Tuesday a report was published in the famous Italian sports newspaper “La Gazzetta dello Sport” about the important contributions Turkish President Recep Tayyip Erdogan made to Turkish football.

What major changes occurred throughout the last years in Turkish football –  the most popular sport of the Turks?

Despite his intense program as President, Recep Tayyip Erdogan – who is by the way not surprisingly a former amateur footballer – is quite interested in football.

While he misses no important match, he always wears the scarf of the football team of the city he is rallying – not a common scene elsewhere. A gesture of solidarity with the local community.

Indeed football is believed to create a special bond between people, inevitably leading the government to spend and invest in this area.

*Used in La Gazzetta dello Sport, a collage of President Erdogan during his time as an amateur footballer.

La Gazzetta dello Sport highlights not only the number of stadiums built in Turkey in the last few years, but also investments such as the “Passolig” – security measures designed to prevent the entrance of hooligans and aggressors to the stadiums.

In the last 10 years 31 football stadiums were built in Turkey. No other country in Europe has built so many stadiums in such a short period.

The Vodafone Park, a stadium in Besiktas, which has a capacity for more than 40 thousand fans, is equipped with high-speed Wi-Fi network, HD monitors and interactive screens in different sizes, which instantly reflect the results of other games played elsewhere.

Vodafone Park is also Turkey’s first environmentalist stadium; with features such as intensive use of solar energy through solar tracker tools, reductions of greenhouse gases, no production of chemical or acoustic emissions, no air pollution, no risk of fire and rainwater harvesting.

*Collage of just a few of the stadiums built by the Turkish Football Federation in the last ten years.

Turkey is a strong candidate for the 2024 UEFA European Football Championship. As La Gazzetta Dello Sport puts it; “With their capacities (from 50,000 to 15,000 viewers), high standards, the will to show them to the world, Istanbul is a candidate for the Champions League final of 2020, but the big target is the European 2024.”

The newspaper also wrote that Turkey is likely to host the EURO 2024, being among the favorite candidates together with Germany.

In regards to this possibility, during the UEFA 2024 European Football Championship Nomination Coordination Meeting, Youth and Sports Minister Osman Askin Bak stated: “With 31 stadium projects and an investment of approximately 4 billion liras in the last few years, we are proud of taking successful steps not seen in European history. If we get the chance to host this organization, it will make a serious contribution to our country and our cities. I believe that if Turkey is home to EURO 2024, EURO 2024 will make a big difference to the history of the championship as a role model country in the region.”

Vodafone Park was filled to its capacity –“a resounding confirmation of a palpable passion for the game,” as the Italian newspaper called it.

There is an inexpressible confidence in the potential of supporters. According to a federal poll, every citizen (including women and children) watches an average of 2.6 games per week.

The Amputee Football Championship also reflected that football is and remains a social phenomenon that brings together various communities in Turkey.

*Footballers of Turkey celebrate their victory as they raise the trophy after winning the European Amputee Football Federation (EAFF) European Championship final match between Turkey and England at Vodafone Park in Istanbul, Turkey on October 9, 2017.