Fleeing the Nazis as a Child, Lord Alf Dubs Fights for the Safety of Child Refugees

If there's a better understanding of the awful lives that refugees left behind, then there'd be more sympathy. 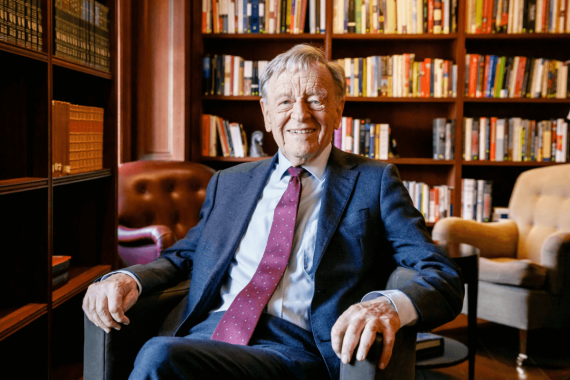 Lord Alf Dubs was a former child refugee who escaped Nazi-occupied Prague on the Kindertransport in 1939 and was one of 669 Czech children saved by English stock dealer Nicholas Whinton. He went on to become an MP and a member of the House of Lords in the United Kingdom, as well as a passionate activist for refugee rights and a patron of a number of refugee-related organizations. Ayan Mohamed Ali spoke with him about his personal connection to the refugee plight and how his experiences with the Kindertransport initiative can assist influence UK government policy on refugees crossing the English Channel.

Q. Could you give a quick overview of your background in connection to the present refugee crisis for our readers who may be hearing about you for the first time?

I came to Britain as a child, an unaccompanied child refugee in 1939 on a Kindertransport. I’ve been active in politics for a long time. I was the director of the Refugee Council for some years, and I was in the House of Commons. I was active with refugees then, and in the House of Lords, I became more active with refugees. More recently, I got an amendment, so in 2016, which the government eventually had to accept, for getting unaccompanied child refugees to Britain.

That was passed, and several 100 got through under that amendment. I got to another amendment that family unions continue, where possible, under the European Union treaty, even after we left the EU, and that passed both houses 920 – 17, but the government deleted it in 2019. So, there are very few safe routes for child refugees, and certainly none from Europe at the present time.

Q. Do you believe that seeing the names and faces of the refugees who drowned trying to reach Britain will help to improve the existing unfavorable perception of refugees and the reluctance of some British people and the government to welcome more?

I certainly think that the shocking van in the tragedy of those people a couple of weeks ago was absolutely horrific. Whether that will make much difference to the government’s attitude, I don’t know. The government seemed to blame it on the traffickers but show little sympathy for the refugees who have no other way of coming here except to traffickers because the government have closed all the doors. What I believe is important is that people in this country should be made fully aware of the circumstances under which refugees have fled their country, fleeing from war, persecution, oppression, discrimination.

I think if there’s a better understanding of the awful lives, and the awful fear that they left behind, then there’d be more sympathy for those that come here, because these are not people who are just trying to improve their condition. Not that there’s anything wrong with time to improve your condition. But these are people who fled and have the full protection of the United Nations Geneva Convention.

Read: Calling out the UK: Pushbacks of Asylum Seekers Cannot Be Normalized

Q. The Dubs Amendment act, which you helped to create, has underlined the need of including the most disadvantaged in immigration talks. What impact has Brexit had on the Act?

There were two amendments, one was that one which the government closed down. They allowed for 80 children to come and then arbitrarily closed it down on the grounds that the local authorities couldn’t provide foster families anymore. We just proved that we found plenty of local authorities willing, but that was the government’s view.

The second method was under something called the Dublin Treaty, an EU treaty under which a refugee child in one EU country could apply to join their family in another country. Let’s say a Syrian boy in France could apply to join his parents if so in England, which was passed in 2017 against some government opposition. It became a law and it said basically that the government should negotiate to continue the terms of that family union provision in the Dublin Treaty, even after we left the EU. In 2019, the government took that out. So, we’ve lost that opportunity as well.

Q. What’s your response to those who say accepting unaccompanied child refugees will create a pull factor, whereby migrants are incentivized to undertake dangerous journeys across the Mediterranean to places like Greece in the hope of being resettled elsewhere in Europe.

This is always the argument that people use the pull factors. I’m not convinced by that argument at all. I think that our push factors in terms of the terrible situation that refugees are left behind, I don’t think the pull factors really carry much weight in the argument.

Obviously, we want to make our country as welcoming as possible for refugees, although I don’t think we’re doing that

Obviously, we want to make our country as welcoming as possible for refugees, although I don’t think we’re doing that. Some of the terrible situations that child refugees have left, there was one same boy who told me that he’d seen his father blown up in front of him by a bomb in Aleppo, Damascus. It is the fear of that situation that drives people to leave much more than any pull factor.

Q. Many British residents have been turned off from engaging in the political process because of the lack of compassion in political arguments over immigration in parliament. What steps do you believe the government should take to address this?

Our problem is that the government has contributed to the hostility because they’ve announced they want to keep the numbers down. The signaling all the time that refugees are not welcome here. The new legislation that just passed the House of Commons and is going through the House of Lords will make the environment even more difficult for refugees.

I think what we need is a government that shows leadership, and that says where people are fleeing for safety. But under the International Geneva Convention, we as a country should be welcoming, rather than hostile. And the difficulty is that if senior politicians make hostile remarks against local communities, it’s not surprising. If there’s some hostility I think that is depressing and awful. I think what all would like is for political leaders to help public opinion to understand why people are fleeing. To say that as a country, we should be humanitarian, and welcome and we can’t take all refugees but those who we take, we should be welcoming.