There is the likelihood that Operation Peace Spring might be resumed in the projected safe zone area if the PKK/PYD withdrawal is not successfully implemented as promised by the U.S. 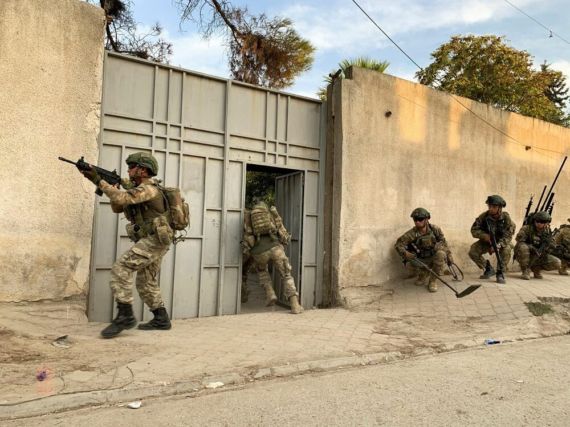 The Turkish Armed Forces commenced its third cross-border military operation against the PKK/PYD in northern Syria on October 9, 2019. As the first incursion into the eastern part of the Euphrates River, this operation began in the wake of a series of fruitless bilateral negotiations between the US and Turkey over a projected safe zone in northeast Syria. Turkey’s security concerns grew considerably following US assistance to the PYD, which had strengthened its ability to build a potential PKK/PYD-led statelet on Turkey’s borders. The vast majority of Turks and Kurds (except in HDP circles) regard this as an existential threat.

It is once the PKK/PYD’s strategy is analyzed that Turkey’s security concerns can be better understood. Firstly, the PKK/PYD should be regarded as a holistic threat and did not separately emerge. For this reason there is no distinction between the YPG (the armed wing of the PYD) and the PYD, and between the HPG (the armed wing of PKK) and the PKK. The threat facing Turkey comes from the combination of the PKK and PYD (PKK/PYD) emanating from their shared ideology, organization, and methodology.

Over the past few years, the PKK/PYD approached the Syrian Civil War in a pragmatic way to achieve its objective of securing a vast area in Syria and Turkey. This involved a new strategy composed of four different elements: affiliating with state actors in Syria by leveraging the fight against Daesh (ISIS), achieving territorial aspirations in Syria, radicalizing youth, and increasing violence in urban areas across Turkey.

The PKK/PYD’s first strategy was to seek out military and political support in order to gain international sympathy and legitimize its territorial aspirations. The rhetoric of fighting against Daesh was instrumental in putting diplomatic pressure on Turkey and causing a postponement of a possible military offensive against the PYD in Syria. The PKK/PYD has managed to maintain the U.S. support until Turkey conducted Operation Olive Branch in Afrin in 2018. This operation signaled for the first time that the PKK/PYD could not be too certain of the future longevity of its tactical relationship with the US.

The security threats of a potential PKK/PYD statelet in northern Syria were brought to the forefront after rocket and mortar attacks on Turkish territory from PKK/PYD held areas in northeast Syria. These attacks targeted the Turkish border towns of Suruç, Akçakale, and Ceylanpınar in Şanlıurfa, and Kızıltepe and Nusaybin of Mardin provinces over the last few weeks. Moreover, modern weapons, ammunition and explosives sourced from the U.S. forces in Syria were said to be smuggled into Turkish territory. Furthermore, as part of their territorialization project, the PKK/PYD caused a demographic change in northeast Syria, forcing local non-PKK affiliated Kurds, Arabs and Turkmens to flee to Turkey as refugees.

The third strategy of the PKK/PYD is to achieve self-determination by using intimidation and coercion tactics in southeast Turkey. The PKK committed violent acts both in rural areas and urban centers with the help of municipalities run by pro-PKK political parties. Despite the fact that the PKK’s urban atrocities, which were clearly manifested during the “trench wars” in 2016, were crushed by Turkish security forces, and pro-PKK municipality mayors and staff were jailed, but the PKK’s desire for a future resurgence in Diyarbakır, Mardin, Van and Hakkari remains. These strategies and the U.S. support for the PKK/PYD made Turkish intervention in northeast Syria inevitable.

Unlike the deployment of numerous fighter jets for intensive airstrikes as was the case during Operation Olive Branch in Afrin, Operation Peace Spring began with a limited number of aircrafts providing constant airstrikes, which forced the PKK/PYD to hold on to their positions.

Meanwhile, Turkish artillery shelled predetermined target locations in order to render the PKK/PYD’s ability to use in-depth defensive tactics impossible. Turkish and Syrian ground forces were also supported with precise airstrikes from combat drones while they maneuvered to encircle the urban towns of Rasulayn and Tal Abyad.

The high fire power and mobility capability of the maneuver forces helped the Turkish Commandos and Syrian National Army break through the PKK/PYD defense lines easily. Under this continuous fire and with the quick maneuver of Turkish operation forces the PKK/PYD could not succeed, and eventually failed to confront the Turkish operation forces. In retaliation, the PKK/PYD fired a series of mortar shells in Turkish border towns.

As of October 17, the Turkish Armed Forces have operated in the area between Rasulayn and Tal Abyad, an area around 120 km in length and 10 km in width. The area captured reached 30 km in width with a total area of approximately 1200 km2. Following Turkey’s military advance, U.S. forces withdrew from Ain Issa, 700 Daesh (ISIS) members were released from prison in Ain Issa by the YPG terror group, 702 PKK/PYD members were killed and 24 others surrendered to operation forces according to Turkey’s Defense Ministry.

In response to the operations, many European countries including Germany, France, the Netherlands and Sweden, declared a ban on weapons sales to Turkey. In a speech by President Erdogan, Turkey’s reaction to Europe’s hostility towards the operation might be to open the borders to allow Syrian refugees to enter Europe. The fear of hosting further refugees could urge European countries to have greater cooperation with Turkey and encourage the return of refugees back to their homes in northeast Syria. The area between Rasulayn and Tal Abyad was not chosen randomly by the Turkish government. Turkey aims to clear the PKK/PYD from an overwhelmingly Arab populated area. This was the first area where the demographic change was carried out by the PKK/PYD terror group when they seized the territory in 2015.

The US-Turkey deal over Northern Syria

While the operation was in the process of capturing Ain Issa, Rasulayn and the surrounding areas, an agreement was reached between the U.S. and Turkey in Ankara on the evening of October 17. The agreement meets Turkey’s operation objectives and there will be no further military push except for emerging contingencies that may develop. Although, the US handover of Manbij was anomaly in the western part of the Euphrates River, the race to control Manbij caused no major security instability in the region, and expected to result in further cooperation by Turkey with Russia in northeast Syria.

Withdrawal of PKK/PYD members in a timely manner: the locations of the withdrawal and re-location destinations should be determined.

Rules of engagement: this is related to Turkey’s disengagement rules.

How to implement the safe zone: Turkey may need to re-calibrate its military missions in Syria for bringing quicker stability in the region. In this context, new recruitments and a changing power composition may cause a contention between the US and Turkey, as a further attachment of Syrian National Army and non-PKK SDF fighters to the Turkish forces is expected.

Sub-military missions: the missions may include patrolling, observation, surveillance, supervision, investigations of complaints and other implied tasks.

Turkey should focus on its legitimate cause of its counter-terrorism operation while also implementing its plan for a safe zone. It is expected that the PKK/PYD might try to shift its focus of violent acts to other areas amid the disorientation of the withdrawal process. There is the likelihood that Operation Peace Spring might be resumed in the projected safe zone area if the PKK/PYD withdrawal is not successfully implemented as promised by the U.S.

Also Read
What Will Be Turkey’s Possible Operation Plan in Syria?