Vladimir Putin may have made promises he is incapable of keeping. The only way out for Russia would seem to be letting Turkey weaken the YPG to an extent which is manageable for the Russian military presence in Syria, or to clearly threaten the YPG with the strength of the Turkish Armed Forces. 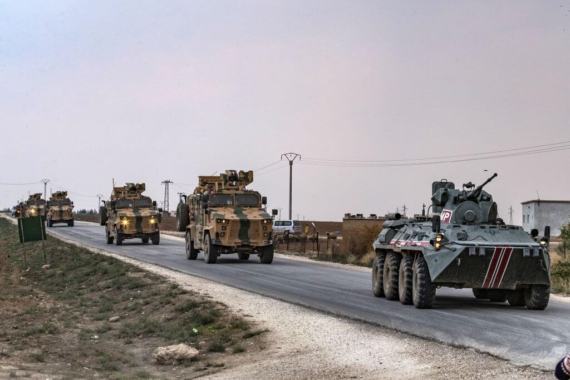 Russian (front) and Turkish military vehicles patrol in the countryside of Darbasiyah town in Syria's northeastern Hasakeh province on the Syrian-Turkish border on November 1, 2019. Getty Images

One of the main outcomes of the Sochi Summit between Turkey and Russia was the joint patrols along the Syrian-Turkish border with a depth of 10km. Since then, northeast Syria has witnessed many important developments, and joint patrols between Russia and Turkey commenced at the moment of writing. The future of Turkish-Russian joint patrols faces an important challenge due to the gap between the agreed mechanism and the capacities of Russia in Syria. Even if the Russians increase their military presence, they might still be incapable of maintaining joint patrols with the Turkish Armed Forces. The only possibility of such patrols for Russia would be to accept Turkish superiority in the region and to use Turkish strength against the YPG.

Going with the premise that Russia and Turkey are fully interested in conducting the ongoing joint patrols and fulfilling the deal, the main reason why joint patrols in northeastern Syria is a difficult task is quite similar to the reason why both nations could not conduct joint patrols in Idlib. Armed groups on both sides are of essential threat to one another. If the Russians enter Idlib, Turkey would have a hard time ensuring their safety and vice-versa. If Moscow wants to conduct joint patrols with Turkey and ensure the safety of such patrols, Russian forces accompanied by the Assad regime would need to convince the YPG terror group first. However, the latter is not so interested in this, especially after the Turkish-Syrian joint military operation against them. Even the Americans who were trusted by much of the YPG had a very hard time convincing the YPG for the temporary entry of the Turkish army in a much smaller area in depth and length. It is impossible that the YPG will accept Turkish patrols willingly along the entire Turkish-Syrian border strip.

The only option for Russia to facilitate the joint patrols would be to implement the Sochi agreement fully. Only if Moscow enforces the withdrawal of the YPG to 30km south of the Turkish border will joint patrols with Turkey be safe and durable. Some patrols might happen without the full withdrawal, but the risks are too high and it won’t be sustainable, especially when both sides enter non-rural areas. Therefore, the Turkish demand of joint patrols which was agreed upon in Sochi can be seen as a guarantor mechanism for the real withdrawal of the YPG from the safe-zone. There seems to be no way of having joint patrols with Turkey and providing camouflage for the YPG to remain in the zone simultaneously.

And it is exactly at this point that Russia may reach its limits in Syria. As the situation in Idlib is still fragile, the Assad regime is incapable of sending its battle hardened forces to northeast Syria. The Russian military assets are located at the west side of Syria. To build up a strong military presence in northeast Syria would be a huge task for the Assad regime and Russia’s logistics. For instance, the S-400’s air protection system does not cover the Russian forces in east Syria and the financial resources of the regime are limited.

Even if the regime and Russia could manage to build up a strong presence in northeast Syria, it seems that the enforcement of the YPG’s withdrawal from the safe-zone would almost be mission impossible for Russia. Vladimir Putin may have made promises he is incapable of keeping. The only way out for Russia would seem to be letting Turkey weaken the YPG to an extent which is manageable for the Russian military presence in Syria, or to clearly threaten the YPG with the strength of the Turkish Armed Forces.