The Middle East has come to a point where the possibility of a violent conflict between powerful forces in the region is higher than ever. 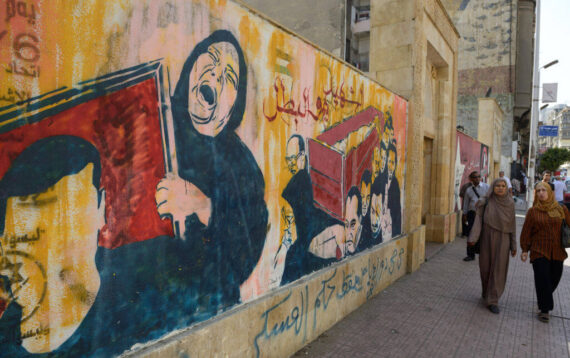 Painting Mural in Cairo. Murals and graffitis to protest against the regime of former Egyptian President Hosni Mubarak, painted by students of the Academy of Arts, in Cairo, during the Revolution of 2011 on September 20, 2015 in Cairo, Egypt. Getty Images

The political atmosphere in the Middle East has been increasingly fragile. Recent developments in the Persian Gulf, Israel’s aggressive policies towards Palestine and continuing confrontation between Iran and the United States have created a new environment where the possibility of a region-wide conflict is more obvious than ever. In addition to these dynamics, mutual tensions, rivalries and hostilities have been dragging a number of regional actors to resort to new ways of confrontation. There are a number of developments that have an impact on the current stalemate in regional politics.

First of all, the Arab revolutions process has had the biggest impact on today’s political atmosphere in the region. While the revolutionary uprisings that started in Tunisia and then spread to Egypt, Libya, Syria and Yemen shook the political structures in these countries, they also forced regional forces to implement a new Middle East strategy. During this period, Turkey and Qatar supported the revolutionary wave, in opposition to Saudi Arabia, the United Arab Emirates and Israel, which supported counter-revolutionary movements. The most obvious example of this was in Egypt. Mohammed Morsi, who came to power with a democratic election, received Doha and Ankara’s support, while Riyadh, Abu Dhabi and Tel-Aviv were behind the military coup on July 3, 2013.

Recent developments in the Persian Gulf, Israel’s aggressive policies towards Palestine and the confrontation between Iran and the U.S. have created a new environment where the possibility of a region-wide conflict is more obvious than ever.

The conflicts in Syria and Yemen have also led tension to grow between regional rivals. In both cases, Saudi Arabia and the United Arab Emirates have taken a sharp stance against Iran, fearing the expansion of Tehran’s regional influence. While Riyadh and Abu Dhabi tried to overthrow the Assad regime in Syria, they embarked on a military operation to stop the advance of the Iranian-backed Houthis in Yemen.

The leadership change in Saudi Arabia has also had a lasting impact on Middle East politics. Following the death of King Abdullah in January 2015, King Salman became the ruler of the monarchy. During King Salman’s rule, Saudi Arabia has been undergoing a serious transformation in both domestic and foreign policy. King Salman’s appointment of his son Mohammad bin Salman as the defence minister and then as Crown Prince of Saudi Arabia was a decisive moment for the Saudi leadership. Mohammad bin Salman soon became the most influential figure in the country as he eliminated domestic opposition with widely criticized crackdowns on influential figures in the Kingdom. Bin Salman also tried to dominate the political arena in the Arab world by forcing smaller Gulf and Middle Eastern nations to follow Saudi foreign policy, which prioritized anti-Iranian strategies.

Another dynamic that had an impact on the current status of Middle East politics is the rise of the United Arab Emirates as a foreign policy actor. Since the start of the Arab revolutions, it can be observed that the United Arab Emirates has followed an active and aggressive foreign policy and directly involved in regional political developments. With the support of Saudi Arabia and Israel, the UAE’s hostile policies target countries like Turkey and Iran.

The power struggles in the post-Arab revolutions period has led to the establishment of new political alliances, thanks to the support of external actors such as the U.S. & Russia.

Last but not least, Donald Trump’s rise to the presidency in the United States in 2017 had a significant impact on Middle East politics. Trump’s policy towards the Middle East was significantly different from his predecessor, Barack Obama. While Trump strongly backed Israeli policies in Palestine by recognizing Jerusalem as the capital of Israel and moving the U.S. embassy to the city, he also targeted Iran by withdrawing from Joint Comprehensive Plan of Action and bringing new sanctions against Tehran. Trump also supported Saudi Arabia and the UAE and forced these countries to work together with Israel.

It is obvious that Middle East politics is on the brink of a serious breakdown. The starting point of this regional transformation was the Arab revolutions of 2011. The recent popular uprisings in Algeria and Sudan illustrate that the spirit of the Arab revolutions is still alive and has the potential to affect regional political dynamics. The power struggles in the post-Arab revolutions period in the region has led to the establishment of new political alliances, thanks to the support and instigation of external actors such as the United States and Russia. Therefore, the Middle East has come to a point where the possibility of a violent conflict between powerful forces in the region is higher than ever. It is not known whether on-going tensions will create a conflict environment, but it is certain that the search for a new regional order will continue.