A weak cease-fire is likely but also open to the possibility of further escalation in the field. Each party will possibly use the military confrontation during political negotiations in Astana or Sochi. 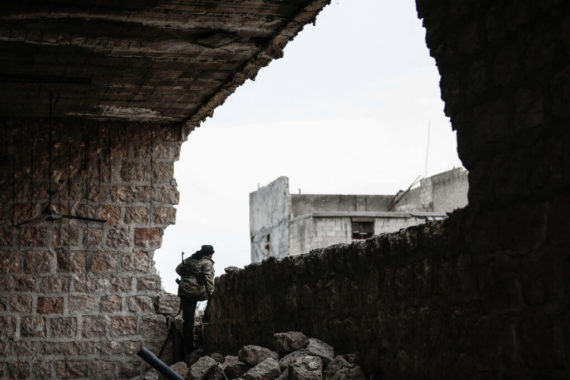 A Turkish-backed Syrian fighter looks out from a damaged building in Tadef, near the city of al-Bab, in the eastern countryside of Aleppo province on April 27, 2018. Getty Images

The military escalation in the northern Hama countryside is part of the pressure on Turkey to resolve its options and make concessions. The escalation also reflects the stalemate of the Astana process and the growing differences between its three sides. However, it is not expected that the current escalation will produce or lead to any political results in the light of the inability to end the military campaign and while indicators show there could be a new situation in the area.

The 12th round of the Astana negotiations, which took place on April 25-26, 2019, failed to achieve a breakthrough in the presented files especially the Constitutional Committee and the detainees, which was followed by several Russian statements of escalation, especially the statement of Russian President Vladimir Putin from Beijing in which he said “the possibility of the battle on Idlib still exists but the timing is not.”

Several days following Putin’s statement, the Syrian regime backed by its Russian ally began a military campaign in Hama northern countryside on 5 May, 2019, and captured several towns and villages, most notably Kafr Nabudahand and Qalat al-Madiq. Before this campaign started, the Syrian regime and Russian warplanes launched intense airstrikes on the northern and western Hama countryside and later extended to Idlib southern countryside.

The continuation of battles in Hama, the regime force’s difficulty in advance, the high number of casualties and the increasing tone of official statements from Turkey prompted analysts to provide multiple readings of the recent field escalation.

The Turkish stance towards this process was initially overshadowed by silence while European countries and the U.S. only issued timid statements. This came while opposition forces were able to temporary advance in the Tal Rifat area before it withdrew, which was interpreted as a “swap deal” between the Turkish and Russian sides. But the continuation of battles and the difficulty of the progress of the regime forces in addition to the high number of casualties and the escalation of the Turkish statements later, prompted analysts to provide multiple readings of the field escalation outside the framework of the “swap deal,” and this piece is trying to analyze the military escalation, the Russian and Syrian regime motives and exploring the limits of the current field escalation and the consequences on the political and field situation.

The failure of round 12 of the Astana negotiations to achieve a breakthrough in the file of the detainees and the Constitutional Committee, was followed by Russian statements on a possible operation in Idlib which it didn’t set a date for. These statements were accompanied by a marked escalation in the field since the beginning of May.

Syrian regime forces and its backed militias, due to the firefight and the intensive shelling, have made progress on the ground and captured several towns and villages such as Kfarabouda, Qalqat al-Madiq and others. The size of the area that the regime’s forces captured recently from the armed opposition forces is 60 square kilometers.

The progress of the regime’s forces in Hama northern countryside, accompanied by the temporary progress of the Turkish-backed opposition groups in Tal Rifat area and the lack of clarity of the Turkish position on the current military situation, indicated that there was a “swap deal” between the Turkish and Russian sides. However, this analysis is hasty and inaccurate due to the following reasons:

The current military escalation in the field can be traced back to the stalemate in Astana and the growing differences between its parties, as demonstrated by the failure of the Round 12 negotiations to make any progress. Moscow’s desire to change the field’s equations so that it can move the negotiations and push its political vision for resolution and to pressure Turkey to ease its opposition to the Russian efforts within the course of Astana, and push it to respond to Russian demands in the de-escalation zone.

Moscow is trying to intensify pressure on Ankara to resolve its position on the S-400 deal, and to sabotage the understandings emerging between Turkey and the U.S. in multiple files.

Moscow is also trying to intensify pressure on Ankara to resolve its position on the S-400 deal, and try to sabotage the understandings emerging between Turkey and the United States in multiple files such as the situation in the east of the Euphrates. On the other hand, Iran and the regime want to invest military escalation to sabotage the Turkish-Russian understandings. This is what Turkish president Erdogan pointed out in the telephone conversation with his Russian counterpart saying that the regime is trying to inflame the situation on the ground to serve its political agendas and stalling the formation of the Constitutional Committee. While Iran wants to impose itself as a partner in the Sochi Agreement through its co-operative militias on the ground, as well as sabotage of emerging understandings aimed at its interests and influence in Syria.

10 May 2019, in the first six days of the battles, the Iranian-backed militia’s participation was confirmed on the following axes:

The limits of military escalation and its political and field implications

Moscow bet on the completion of rapid field progress similar to what happened in the southern Syrian region last year (a military collapse followed by reconciliations), also bet on the growing Turkish-U.S. conflict and Ankara’s preoccupation with internal files but failed in part to achieve what it sought despite the intense airstrikes and the size of the forces participating in the ground attack, where the opposition factions and jihadi groups were able to absorb the shock and began to launch counter-attacks against the regime forces, the field operations showed the weakness of the ground forces backed by Russia (such as 5th Corps, Tiger Forces and Liwa al-Quds) and the significant casualties among its ranks.

As well as the field, operations did not affect the positions of Ankara and didn’t push Turkey to compromise as Moscow believed. In light of the current situation, it is likely a weak cease-fire will be reached but will be open to the possibility of resumption of escalation in the field and each party will seek to invest in the situation on the field and use it in political negotiations in Astana or the Sochi agreement. In conclusion, the Sochi deal cannot be bet on, as the deal faced several problems in the long run and it is unlikely to collapse in the future.