Mosul in Ruins, Kirkuk Awaits a Similar Destiny: What can Turkey do?

Turkey should give clear signals to both al-Abadi and Iran that Kirkuk is an issue that touches its national security and it will not stand by watching if things deteriorate. 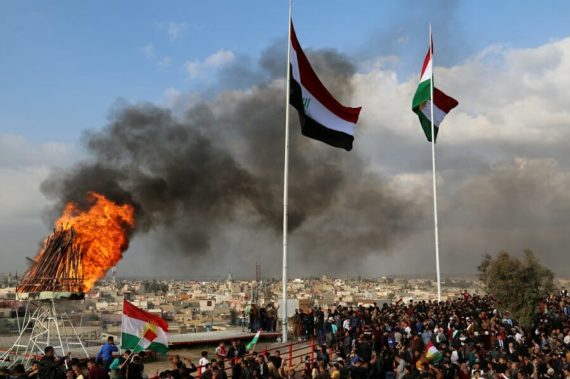 There is an alarming rise in the tension between Baghdad and the Kurdistan Regional Government in Erbil (KRG). From an approaching conflict between the two in Kirkuk, Turkmen will suffer the most. The oil flow from Kirkuk and KRG will be disrupted too. The clash could weaken both sides and the PKK will avail itself of the possible power vacuum. All these can severely harm Turkey and cause a serious foreign policy crisis. What has sparked the crisis and what options does Turkey have to prevent a clash?

The apparent reason in the rise of the intensity in the conflict is KRG President Masoud Barzani’s insistence on holding an independence referendum on 25 September 2017. A close scrutiny of the ties between the two parties, however, reveals that there is a wide range of issues keeping them apart. The Baghdad government’s preoccupation with the war against Daesh has delayed the inevitable clash. With the battle of Mosul approaching its end, the political and military resistance of Sunni Arabs has been severely dealt with. There have been numerous recent calls from Baghdad to end the only defiant Shiite -dominated regime Iraq faces, that in the north from KRG. Should Turkey remain inactive and unable to defuse the tension, Iraq may soon witness its worst civil war and the Iraqi state could melt away. The consequences can be ruinous for all Iraqis and regional actors, especially for Turkey. Iran will avail itself of this new round of violence to assure its total dominance over Iraq and the building of a Shiite crescent will be completed.

During the last decade, the relations between Erbil and Baghdad have been plagued with numerous contentious issues. This became apparent with the departure of US forces from Iraq in late 2010 when the former Prime Minister Nouri al- Maliki inaugurated a sectarian policy which alienated and marginalized both Sunni Arabs and Kurds. Although the current Prime Minister Haider al-Abadi promised to undue his predecessor’s policies and make the regime inclusive, al-Maliki’s followers and pro-Iranian Shiite militias have hindered his efforts. The Iraqi regime is now more exclusive than ever. Only two weeks ago Ibrahim al-Jafaari, the foreign minister, issued a decree which removed several Sunni individuals from Iraq’s foreign diplomatic corps.

Recently the US has failed to convince al-Abadi to allow several Sunni politicians, who have been forced into exile by al-Maliki, to attend a conference in Baghdad to build a credible Sunni leadership in Iraq. On July 20, 2017, the Shiite militias in Mosul clashed with the Nineveh Guards which is a further indication that Shiite militias are determined to re-establish their pre-2014 exclusive security rule in Mosul.

The ongoing conflict with KRG should be also viewed within this context. The KRG arguably feels that the partnership in government, which Kurds feel that the post-Saddam era will present to them, is all but an illusion. On 19 June 2017, in a response to al-Abadi’s statement which described the referendum as illegal, Barzani said “the Iraqi constitution, which was intended to create an inclusive government ruling by consensus of its major components, is dead in letter and spirit. Why is Article 140 of the constitution, which was supposed to be implemented in 2008, not implemented and neither is it on the agenda of the government in Baghdad?” Barzani pointed out that the Kurds have been gradually forced out from most important security, military and political positions, and al-Malik’s slogan to establish a government of the “political majority has been completely established in reality.”

Lately Iran’s Ayatollah Ali Khamenei stated that the referendum in northern Iraq is unacceptable. There is a heated exchange in the media and political statements made in Baghdad, Tehran, and Erbil. Although al-Abadi has been generally accommodating, recently his language became more threatening to the Kurds. Even Ammar al Hakeem, who has been in the past a close ally of Barzani, has recently threatened him with dire consequences should he proceed with the referendum. On 20 July 2017, the all-powerful bloc of State of Law in the Shiite Alliance issued a call in a statement to put Barzani on trial for charges of treason and collaborating with Israel and Turkey against Iraq. The Iranian regime too is threatening Barzani.

Having failed to dissuade the leaders of the Patriotic Union of Kurdistan from supporting the referendum, on 18 July 2017 Muhammed Baqri, the of Chief of Staff of the Iranian armed forces, reminded the Kurds of Iran’s punitive and powerful weapon capacities.

The Possible Clash in Kirkuk

Kurdish sources allege the Baghdad government has deliberately delayed the expulsion of around 2,000 Daesh militias from Haweja district, south west of Kirkuk, in order to use it as a pretext to attack Kirkuk. Peshmerga sources have recently detected the arrival of hundreds of Iranian revolutionary guards in areas adjacent to Kirkuk.

Unless the US and Turkey deliver a strong message to Iran, one can expect Qasem Suleimani, the head of Quds Corp, to soon appear in the ruins of Kirkuk to boast of victory over the so-called pro-Israeli and Saudi agents among the Kurds. The attack on Kirkuk can make tens of thousands of Turkmen homeless and asylum seekers at the frontiers of Turkey. The toothless Turkmen National Front and its followers can be caught in the middle of a devastating conflict. One of the possible consequences of an attack on Kirkuk is that it can also deepen the crisis between the Shiite and Sunni Turkmen groups. It is noteworthy that Iranians have already mobilized 12,000 Turkmen as part of the Shiite militias in Iraq for a possible attack on Kirkuk. There is also a potential for the Baghdad regime to use the old rivalries between Kurds and Turkmen and this might hurt Turkmen who have no military power to match that of the Kurds.

What can Turkey do to rescue Kirkuk?

Barzani and all other Kurdish parties have put too much stakes on the referendum and Kirkuk to retreat from their decision to hold the referendum. Forcing Barzani to give up the referendum will be a serious blow to his standing among the Kurds and will only help his foes, especially the PKK. Regardless of the stated objection of many Western countries to the referendum, Barzani appears to have received some assurances from many circles in the West to go ahead with the referendum. It suffices to say that on 28 June 2017, The Washington Post, which is close to the circles of decision making in the US, had Barzani write an op-ed to sell the idea of the referendum.

Turkey can still use its economic and political leverage with Barzani to delay the declaration of independence after the referendum. Donald Trump’s administration and several European Union countries prefer to enhance al-Abadi’s position in Baghdad in order to enable him to curtail the drastic Iranian influence over his country. This policy requires KRG not disrupt al-Abadi’s work. Barzani can be pressured by the US to be content with the de-facto annexation of the disputed territories and more independence using its current policy of selling its oil and gas abroad.

Being aware of this realty, Turkey can seek US support to defuse the situation before the current tension goes out of control and gives Iran access to Kirkuk. In addition, Turkey should give clear signals to both al-Abadi and Iran that Kirkuk is an issue that touches its national security and it will not stand by watching if things deteriorate. Besides, Turkey could use its leverage with Barzani to safeguard Turkmen rights if the referendum is held in Kirkuk. Hosting a meeting with both Barzani and Turkmen leaders in Turkey is long overdue. Shortly, Turkey needs to engage both Baghdad and Erbil in a more vigorous and foreword policy to spare Kirkuk from the destruction which has been inflicted on Mosul.