Ms. Marvel is a step in the right direction. It is an important example of positive representation that has the potential to empower Muslim youth around the world as well as expose non-Muslims to a more accurate depiction of Muslim youth culture. 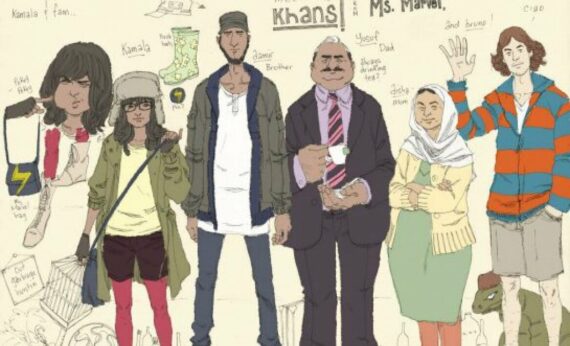 Representations of Muslim identity in America have been disproportionately negative even prior to the events of 9/11. Considering the global consumption of the American media, it is of utmost importance that these images are combated. The negative image of Islam is not just a Western project, but it also has a history in Turkey and other Muslim majority countries. Therefore, it is essential that there is positive cultural production that appeals to younger generations. Marvel’s rebranding of their old comic book series ‘Ms. (Kamala) Marvel’, with a new protagonist who is a sixteen-year-old Pakistani-American teenager from Jersey City, is a great example of such cultural pioneering.

Ms. Marvel’ offers a refreshing representation of multiple Muslim American characters because it is a project based on partial self-representation. It is headed by two Muslim women: the writer, Willow Wilson, a white convert to Islam, and the editor, Sana Amanat, a Pakistani-American who has previously edited many of Marvel’s major comics. Both Wilson and Amanat fight ideas of Orientalism that permeate from the West and find their way into misrepresented communities. Ms. Marvel offers a potential for curing us not only of Western othering but also of self-Orientalising.‘Ms. Marvel’ is important because it plays a role in the larger landscape of Orientalism.

Edward Said had developed an extensive critique of Orientalism in his acclaimed book by the same name, later wrote in his article ‘Orientalism Reconsidered’ that ‘there is still a remarkable unwillingness to discuss the problems of Orientalism in the political or ethical or even epistemological contexts proper to it’. Much literature has been written on the problem of Orientalism since Said’s book. Now, the question is how one deals with it.

Said finds one of the biggest problems at the core of the issue to be the self-righteous superiority complex of the Western white observer who freezes the ‘Orient’ in time and does not allow it contextual or temporal dynamism. This leads to arguments about Orientals’ incapacity for self-representation. ‘Ms. Marvel’ subverts this by asserting itself as self-representation.

So what makes Kamala’s world different from the overwhelming mainstream narrative’s representation of the Muslim identity as foreign and threatening? Kamala is a sixteen-year-old high school student who lives with her parents and her older brother, Aamir. She has an awkwardness built into her movements and a quirky, hipster aesthetic. She wears retro vests, brightly coloured leggings, big hats and fingerless gloves. Kamala does not cover her hair, except during prayer service at the local mosque, and she only wears traditional Pakistani dress to the mosque or weddings. At home she uses Urdu words, some of which are left unexplained to the reader. This is important to note because it allows the story to tell itself on its own terms and not in the terms of a white Western audience.

Many superheroes have some flaws that make them more human to the reader. For Kamala, one of her humanising experiences is dealing with being a brown girl in a world dominated by white beauty standards. Her superpower is polymorphism, so she is a shape shifter. This, of course, resonates with being a child of immigrants who inhabit multiple spaces both physically and mentally.

More concretely in the storyline, this power allows Kamala to finally turn herself into her hero: the old Ms. Marvel, a tall, blonde woman who dresses in tight costumes, with boots up to her thighs. The story takes the reader through Kamala’s maturing process as she reconciles her insecurity with her religion and ethnicity. This is a major shift in the way comic books have dealt with women as well as how Western popular culture has dealt with Muslim women’s relationship to their faith.

The supporting characters in Kamala’s story are just as well conceptualized and are far from easily recognizable token diversity figures. The two Muslim men that are most present in her life are her brother and her father. Aamir, the older brother, is a devout young Muslim, while their father seems more relaxed in his religious practice. Aamir is shown saying prayers before eating at the dinner table, going to lectures at the local mosque and even chastising his father for working at a bank (implying the handling of usury, which is forbidden in Islamic law), while his father is dismissive and gently scolds him for still being unemployed and yet having the courage to criticize his work. The father figure is shown as authoritative and gentle.

‘The two Muslim women who are closest to Kamala are her mother and her friend Nakia, who is Turkish-American. Both women wear the hijab. This is interesting because the story does not portray hijab as a tradition that cannot transcend generational boundaries. Nakia is shown as more mature and strong-headed than Kamala. She does not like people calling her by an Anglicised nickname and prefers if they called her by her real name; in contrast, Kamala tells her father she would rather have a ‘normal’ name like Jasmine or Layla. By making Nakia a more strong-headed woman than Kamala, Wilson and Amanat turn upside down the assumptions their non-Muslim readership might have.

Many popular culture stories that feature people of colour take an apologetic turn and become narratives of white redemption by focusing on the white allies. Makers of ‘Ms. Marvel’, however, do not shy away from portrayals of privileged, obnoxious white teenagers. Yet they also treat the white American teenage identity in an equally multi-layered way. Kamala’s other best friend, Bruno, is a young white man who upholds high moral standards, is praised by Kamala’s father and develops a crush on Kamala. The comic does not ignore the presence of white supremacy, which manifests itself in both physical and symbolic violence, while acknowledging that white Americans like Bruno are multifaceted as well.

‘Ms. Marvel’ is a step in the right direction. It is an important example of positive representation that has the potential to empower Muslim youth around the world as well as expose non-Muslims to a more accurate depiction of Muslim youth culture. Kamala Khan’s story is successful because it is able to respect cultural specificity while also creating a story that is universally relatable. This is due largely to the fact that it is a project co-led by two Muslim women. They do not accommodate the dominant narrative about their protagonist but rather ask the reader to tear this narrative down. They are able to do this because they create a character that is relatable. In this regard, Kamala functions much like one’s first Muslim friend. Structures of oppression take a long time to come crumbling down but to change one person’s perception all you need is another.

Didem Kaya is currently an undergraduate at Yale University, majoring in American Studies. Prior to Yale, she graduated from Robert College in 2012. She is interested in cultural history and identity politics.

Also Read
The Headscarf Decision of the European Court of Justice