Mutawasiloun is a manifestation of Palestinian collective memory. The more Israel becomes racist and imposes laws that enforce apartheid, the more Palestinians realize the nature of mutawasiloun. 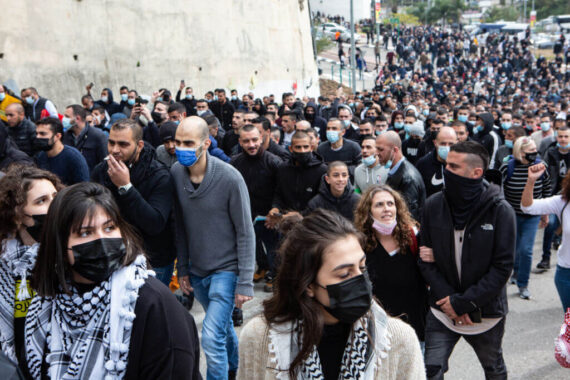 Palestinian citizens of Israel protested in dozens of towns across the country on Friday, 5 February, 2021 against Israeli police violence and the failure of Israeli authorities to confront the growing threat of crime in their communities. Photo by Mati Milstein, NurPhoto via Getty Images

In the summer of 2017, I attended an exceptional Palestinian wedding in Istanbul, where the groom was from the Gaza Strip, the bride was from the West Bank, and those in attendance were from every corner of historic Palestine, including Palestinians who hold Israeli citizenships. The groom and the bride held their wedding in Istanbul knowing that it is impossible to hold it in Palestine, where both of them could not be present at the same time.

Gaza has been placed under a tightened Israeli siege for nearly 15 years and it is nearly impossible for Palestinians from Gaza to travel to the West Bank, including cancer patients, let alone those wishing to attend a wedding. The only solution was to hold the celebration in Istanbul, and just like the city connects Asia with Europe, it connected, even for a short while, Palestinians from the Gaza Strip, the West Bank, and Israel.

Among the attendees were Muhannad Abu Ghosh and Sherin al-Araj. Both were arrested by Israeli forces on January 15, 2021 for contacting “foreign agents and persons.” al-Araj  was released on February 10, 2021. This accusation, which is too loose and could include contacting Palestinian friends and colleagues residing outside of Palestine, including those in Gaza, could send them to prison for years.

Read: 103 Years since Jerusalem’s Capture: Britain Is Responsible for the Plight of the Palestinians

Palestinians Majd and Ward Kayal were arrested by Israeli forces in their Haifa home in December 2020 for the same reason before being released shortly thereafter.

Frustrated by these Israeli policies and guided by their belief that they have the right to connect with their fellow Palestinians without a permit, let alone an Israeli one, Palestinian activists took to social media to express their anger and unity. A group of activists launched a hashtag in Arabic, Mutawasiloun, which could be roughly translated into “we will continue to connect with each other,” to protest these Israeli policies.

Some activists expressed their rejection of these Israeli policies, others narrated how they never met Palestinians from the West Bank or Palestinians in Israel.

While some activists expressed their rejection of these Israeli policies, others narrated how they never met Palestinians from the West Bank or Palestinians in Israel, and others yet made use of the hashtag to celebrate Palestinian culture, food, and social ties, which they said will not be restricted by Israel regardless of its efforts.

Israel has always treated Palestinians who stayed in their towns and villages after its establishment in 1948 with suspicion. From 1948 to 1966, Palestinians in Israel were placed under a strict Israeli military rule, and during the process, many of them were pushed out of their villages, arrested, or killed. Palestinians in Israel needed an Israeli permit to move in and out of their communities until 1966 when this military rule was officially lifted, giving them some freedom to lead a relatively normal life.

Palestinians use slingshot to throw rocks as they clash with Israeli security forces along the Gaza-Israel security fence during “From Gaza to Haifa: Unity of Blood and Shared Destiny” protest near Al Bureij Refugee Camp on the Gaza-Israel border, in Gaza City, Gaza on June 1, 2018. Photo by Hassan Jedi, Anadolu Images

During this process, Palestinians who remained in cities such as Majdal, Askalan, Jaffa, and Ramle were driven out to make space for Jewish migrants. Palestinians were viewed by the newly established Israeli state as unwanted others, a fifth column, a demographic threat, or at best a security threat.

Today, the 150,000 Palestinians who remained inside what became the borders of the state of Israel have become nearly two million. The “danger” of the demographic bomb has only increased with time and so have Israeli measures against Palestinians in Israel.

In addition to Israel’s attempt to silence Palestinians who now hold Israeli citizenship, Israel has accelerated its measures to get rid of Palestinians in Israel, including waging arrest campaigns, house demolitions, and blackmailing them to make sure that they have no national aspiration or connection to the rest of the Palestinian society.

The more Israel demolishes the houses of Palestinians in Ramle, the more people realize that the collapse of this system is a matter of time.

The “divide and rule” policy has been at the heart of Israel’s strategy to divide Palestinians. What could be better than a Palestinian killing another Palestinian after all? If you want to be a Palestinian in Israel, you are welcome as long as you commit to the principles and ideology of the state which views you as a fifth column. Once you contact a Palestinian outside of Israel for any purposes, you will pay the price – as demonstrated by what happened to Abu Ghosh and al-Araj.

If you are a Palestinian in Israel and want to be part of the hasbara machine of Netanyahu’s right-wing government, you are more than welcome. And what better timing than to claim falsely that Jews, Christians, and Muslims “co-exist together in peace” in Israel? Once, however, certain Palestinians step out of this zone designated by Netanyahu’s government, they become unwanted others and a fifth column who deserve to be arrested and harassed.

After 73 years, Israel should understand that all attempts to isolate Palestinians from each other will eventually fail. Israel has not managed to make the Palestinian diaspora in the U.S., Europe, and South America forget Palestine, although many of them left decades before Israel was established. Israel will never succeed in making Palestinians in Israel less Palestinians over time.

Mutawasiloun is a manifestation of this collective memory that binds Palestinians together as one nation. The more Israel becomes racist and imposes laws that only enforce apartheid, the more Palestinians will realize the nature of mutawasiloun and the need to stand together. The more Israel demolishes the houses of Palestinians in Ramle, who are supposed to be Israeli citizens, the more people realize that this system that treats people based on their religion is not sustainable and it is a matter of time before it collapses.

Netanyahu’s option for Palestinians is clear: to keep them encaged in historic Palestine under Israeli control without full rights. Palestinians should be clearer – it is either full rights or committing to a struggle to achieve them, where Palestinians in the Gaza Strip, the West Bank, Israel, and the diaspora can live and connect normally.

VIDEO: Young Palestinians see no end to the Israeli Occupation