“Space Is for All”: An Interview with NASA Engineer Loay Elbasyouni

"Everybody can participate in space exploration and research; it's not limited only to governments anymore." 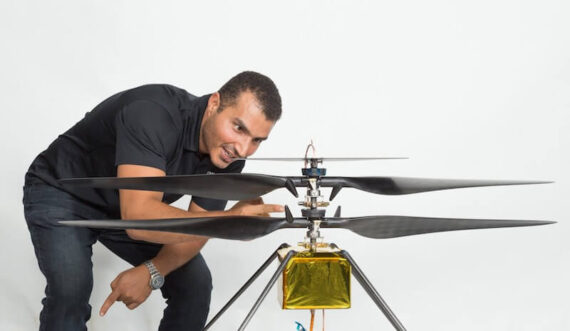 Yousef Aljamal spoke to Loay Elbasyouni, the lead electrical and power electronic engineer of NASA’s helicopter project to Mars. Elbasyouni highlights the need for space collaboration around the “Space for All” motto, where all governments, peoples, and private companies can work together to explore space better as no single country can do this alone.

Q. Many thanks for accepting our interview invitation. Could you introduce yourself to Politics Today readers?

I’m Loay Elbasyouni. I’m an electrical engineer specializing in power electronics, and my focus is electrification, which electrifies everything I worked on a lot of electric propulsions, for instance on the “Mars Helicopter” project, where I was the lead electrical and power electronic engineer for NASA Ingenuity Helicopter. I am currently working on different projects related to  space, some projects with NASA and some other projects with other industries.

Growing up, I was very technical. I always had an interest in different things, and I would figure out how to make things work. I always tried to fix problems. I did a lot, such as painting, building, and helping my family fix technical issues. I also managed to make my own clocks, build my own antennas, fix radios, take engines apart, and fix cars. Whenever I saw broken things, I felt that I had to fix them.

Q. Space research and explorations have become another field of global competition. As a scientist, how do you approach this? Can you keep yourself away from the political and concentrate exclusively on the scientific inquiry?

I think we can divide the world space programs into two: China and the rest. The conflicts right now are between Russia and the United States, but they still cooperate on the space program. The space program originally started with the cooperation of nations without any boundaries. In the past month, a team of Russians and Americans was sent from Kazakhstan to the International Space Station (ISS). As we speak right now, there are Russians, Americans, and Italians working together, astronauts sitting in the same room. Personally, I believe in science, in seeking sheer knowledge and in doing engineering.

No person, no country, or no group can survive on its own. We must cooperate to generate advanced technology. Take electric cars, for instance. We need metals for the magnets of the motor. The same applies to space, such as helicopters sent to Mars: we used noble metals and resources from China. We need advanced chips, and the most advanced chips are produced in Taiwan. Lack of cooperation and collaboration sets a grave obstacle to technological advancement.

Q. Being the lead engineer for the Mars Helicopter, what are the main challenges and successes you encountered along the way?

I was the lead electrical and power electronic engineer for the Mars Helicopter. I oversaw the external part of the helicopter. my team made the design, the motor controller, servo controllers, and the wiring. One cannot fly on Mars because there is almost no air. Everything had to be super lightweight. Even if it was a single component, it had to be very lightweight. We had to utilize earth-rated electronics. There was a big challenge to that and even resistance to acceptance from some of the chief engineers at NASA, because we went against the established norms.

Q. How heavy was the helicopter?

It is 1.8 kilograms. It weighs as much as a laptop, and it looks like 3-4 times bigger than the size of a laptop.

Q. How did you feel when the helicopter landed on Mars and started sending information back to the mission control?

The helicopter is about to make its 34th flight attempt and it was designed to do only 3-5 flights to prove that we could fly on Mars. It has exceeded all performance expectations and its original goal and target, and this makes me extremely proud.

Q. Recently, NASA launched the first space defensive system. What do you think about this program?

NASA successfully crashed a defensive system into an object approaching Earth. It is a success story to hit a moving object in space. The second mission would be to divert or change this object’s orbit. They’re going to calculate how much they could move it, and then based on that, they can scale that project up.

Q. In the past 20 years, there have been huge advancements and successes in space science and exploration. How do you see these developments and what is your message to young people?

We are entering an era called “Space for All.” Everybody can participate in space exploration and research; it’s not limited to governments anymore. Space is changing, from landing on the Moon to the space shuttle programs. We use space every day through GPS and smartphones.

Throughout my career, I worked on airplanes, like Boeing and Airbus. The field of space is not limited to astronomy because I get this question a lot, especially in the Arab world. People say, “Hey, I want to study astronomy because I want to be in space!” But I am an electrical engineer! I like to refer to all these fields—maths, physics, chemistry—as “Applied Physics”. There are probably a lot more jobs for an electrical engineer to work in space industry than for an astronomy major. It is really a large field, and it’s going to be growing a lot in the future.

Read: The US and China Semiconductor Rivalry: What Are the Stakes?

Q. What do you think of the commercialization of space and of some private companies trying to send people to Mars and to the Moon?

Everybody has the right to dream and turn it into reality. However, I think there would be a lot of limitations. We will probably go to Mars in our lifetime, we might have some capsules there, but I don’t think we will see cities on Mars. Some are imagining this, but it will take a lot of infrastructures.

Commercialization of space exists through satellites and the use of Google Maps, but we need to solve the zero-gravity riddle. In the future, we might have some bases on the moon that could do several things like study minerals, also be a gateway to other part of space. There are limitations because everything is going to take time to transport. The biggest advancement I expect to see in the future is to have not only government-run space stations but also private ones, and more satellites around Earth, and a moon base.