Neither Sincere Nor Concrete: Is Turkey's Opposition Getting Ready for Another Defeat?

While the People’s Alliance refers itself to a set of compatible ambitions and narratives, the Nation Alliance is based on incompatible narratives and only has one common objective – to get rid of President Erdogan. 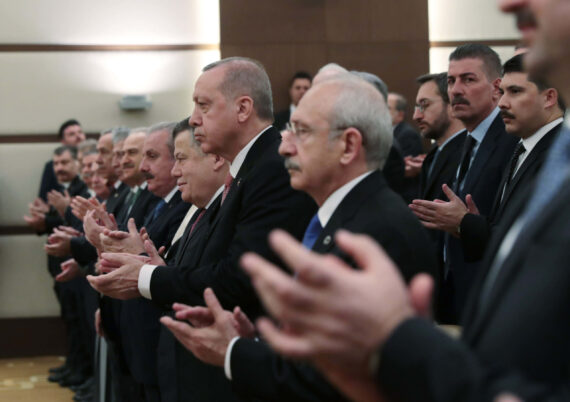 Turkey is heading towards the final phase of its local elections, which will be held on 31 March. With no doubt, Turkey’s policymakers called for a new system of government due to various difficult experiences in the past, as building adequate and strong governments was not that easy. It was quite understandable that parties, which heavily criticized each other and even defamed one another, came together in order to find a common base for the country. As a consequence, citizens supporting each party casted doubt on the sincerity of politicians.

Nevertheless, the new presidential system entailed not a totally new, but a rather structural and stability oriented phenomenon, namely pre-election alliances. These alliances have been firm enough to be continued even in the local elections.

Turkish politics nowadays has established the roots of a two-block political landscape, although not both blocks have concrete political ambitions and systematic preferences. As is known, the “People’s Alliance,” consisting of the AK Party and MHP was established right before the 16 April, 2017, referendum and continued during the parliamentary and presidential elections last year. On the other hand, parties around the main opposition party, the Kemalist-secular CHP, made efforts to bring together entirely different, and indeed ideologically conflicting groups, such as the Kurdish-ethnic HDP, the conservative SP and the Turkish-nationalist-oriented Iyi Party.

The second bloc has less of a chance and more difficulty to persuade and broaden its electorate. This is due to their lack of a coherent election program and the lack of a shared future projection. While the People’s Alliance refers itself to a set of compatible ambitions and narratives, the Nation Alliance is based on incompatible narratives and only has one common objective – to get rid of President Erdogan.

Despite the actual alliance-seeking efforts by the CHP and other parties, they have oddly come to refuse the existence of such an alliance, even in provinces where it is obvious that the candidate is an umbrella one. If a CHP-led alliance does not have the courage to openly conduct a campaign, then political engineering will be an option, and this option will fail on election day. As a stark comparison to the Nation Alliance, President Erdogan and Devlet Bahceli have openly stressed the main framework of the People’s Alliance with regard to the local elections.

The People’s Alliance was established on the night of the July 15, 2016, coup attempt, when the AK Party and MHP leaders took a strong position against the Gulenist putschists. In addition to this, these two parties had previously come together to get work done in Turkish politics. For instance, the MHP did not boycott Abdullah Gul’s bid for presidency in the parliament in 2007 (despite strong opposition from both the pro-tutelage Kemalist officers within the CHP and the Turkish Armed Forces). More, in 2007, both parties came together to lift the headscarf ban, which resulted in a closure trial against the AK Party in 2008. Both party leaders also resisted the violent Gezi Protests in 2013.

Today, the People’s Alliance describes its main character as standing for the “people’s will,” with the only aim to “serve the nation.” However, the Nation Alliance does not seem to have any concrete political position or self-description. This ambivalence and blurriness leads to a lack of transparency. And because of this situation, the People’s Alliance has described the CHP-led alliance as the “product of secret bargaining and political engineering.”

Kemalist-secular authorities and traditional Kemalist voters are unsatisfied with a quasi-alliance between the CHP and HDP due to the fact that the latter is the political arm of the PKK terrorist organization. Senior CHP figures have announced their candidacy from the Democratic Left Party (DSP) as a protest against CHP’s alienation. This has therefore caused dispute between the CHP and DSP, and the CHP has accused the DSP for dividing votes. However, DSP Chairman Onder Aksakal has rejected such accusations and stressed that the CHP is the only actor responsible for the success of the AK Party. Aksakal also underlined the CHP’s previous efforts that failed and that were not compatible with its traditional values. These were, namely, nominating a non-CHP politician as CHP’s presidential candidate in 2014, supporting the ultra-nationalist Iyi Party with 15 CHP MPs in 2018, and of course, not accepting any electoral defeats since 2010 after Kilicdaroglu became chairman.

The 31 March local elections will most likely contribute to the transformation of Turkey’s political landscape. By this, it can be inferred that a two-bloc system will be entrenched in the future. The continuing efforts of the People’s Alliance are reinforcing this trend, while the CHP-led alliance lacks a sincere and concrete narrative. While it lacks a concrete narrative, this does not exclude the actual existence of the Nation Alliance. Time will show whether this alliance will transform in the long-run due to the political pressure felt from the electorate.