New racism is a form of culturalism that can be defined as "racism without race," in which no reference to biological race is found. Neo-racism is highly influential in Europe and is built on cultural difference. 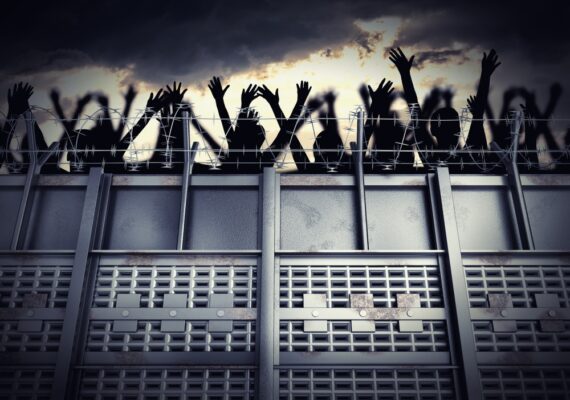 Late historian Eric Hobsbawm called the 20th century “the age of extremes.” Undoubtedly, this description is closely related to the genocides, two world wars, the social movements and the extreme manifestation and sharp rise of racism throughout the 20th century. With reference to Hobsbawm’s arguments, it would not be an exaggeration to suggest that similar tendencies and extremist views persist in world politics in different forms in today’s age.

Due to the mobilization that emerged with globalization and the replacement of conventional wars by more sophisticated ones, global population movements reached unprecedented levels. The extent of this mobilization can be better visualized when it is considered that around 13 million people fled the Syrian Civil War only during the period of the Arab revolts.

The issue of immigration, which was tabled as an agenda topic in the latest G-20 Summit held in Osaka, Japan, stands out as the most critical and urgent problem of today’s world. Becoming a tool for domestic policies in many countries, this issue manifests itself in different forms and mostly in racist discourses.

The evolution of racism

In the aftermath of World War II, studies on racism gradually abandoned scientific racism and focused on cultural racism. As Etienne Balibar contends in his article penned in the early 1990s, “Is There a ‘Neo-Racism’?” “New racism” is a form of culturalism that can be defined as a “racism without race,” in which the arguments of race biology are hardly found.

The contention suggesting that there are insurmountable cultural differences between “we” and “they” constitutes the leading argument employed in the legitimization of neo-racism. The accuracy of Balibar’s analysis becomes obvious when it is considered that the culturalist tone is predominant in the discriminatory and exclusionist policies against immigrants and foreigners particularly in Europe.

The raison d’étre of the far-right: Anti-immigration sentiments

Balibar stresses that the word “race” is replaced by “immigrant” in the context of neo-racism. Immigrants are targeted because of their culture rather than their race and manipulated as a tool for the discourse used by far-right parties in modern Western states to appeal to large masses.

Acting with the strategy of agenda setting, these groups manipulated the public with unfounded news about Turkey and the Turkish people. A noteworthy example is the claim suggesting that 12 million Turkish people will move to England and change the culture and demographics of the country unless Britain leaves the EU.

Similarly, European Parliament member Bernard Monot lied that the French state gave cash cards to refugees, which allow them to make withdrawals of 40 euros a day, and remarked that Marine Le Pen and the National Front prioritize the French people. These examples demonstrate the influence of the “we” and “they” dichotomy produced by the neo-racist discourse.

Reverberations of anti-Turkish and anti-immigration sentiments

Although neo-racism, which is based on a discourse of cultural difference instead of biological superiority, has not been institutionalized in Turkey, neo-racist tendencies are still apparent in the policies of Turkey’s opposition parties. During the campaign periods of the 24 June, 2018, general election, 31 March local election and its re-run on 23 June in Turkey, opposition parties ran campaigns intending to undermine Syrian immigrants, which surely affected the public opinion.

On social media platforms, many politicians and popular public figures shared anti-immigration messages and baseless news on the subject, which sharpened the negative sentiments towards Syrians. For instance, before the Istanbul mayoral election, the Iyi Party candidate and prominent names in the party promised to send Syrian immigrants back to their country.

A recent study conducted by Kadir Has University shows that most of the people who are disturbed by the presence of Syrian refugees and immigrants support the main opposition Republican People’s Party (CHP), the Peoples’ Democratic Party (HDP) and the Iyi Party, which is definitely not a coincidence.

In view of this, it is obvious that political actors have a role in the spread of the hashtag “Syrians, get out!” on social media during the election process. Although the anti-immigration sentiments that are mostly observed in approaches to Syrians have recently been tried to be justified with economic reasons, the negative image of Arabs that is deeply-rooted in Turkish society also has a role in the negative feelings and biases against Syrian immigrants.

The baseless claims against Syrians uttered by some politicians or shared on social networks shape the negative sentiments against Syrians. Misinformation or fake news about Syrians are circulated online and reproduced for political motivations, such as rumors stating that Syrian immigrants have been enfranchised, they are admitted to universities without taking any exam, the state puts Syrians on a salary and pays their costs and bills, the state-run housing agency TOKİ has granted them houses for free, etc. Such misinforming contents spur anti-immigration sentiments in masses to a great extent.

Recently, in Istanbul’s Küçükçekmece district, a Syrian group were subject to violence on the pretext that a Syrian young man verbally harassed a child. But it turned out to be a complete misunderstanding and was revealed that the man did not actually harass the child and the child’s family did not file any complaint. Nevertheless, in this age of informatics where perceptions precede truths, rising racist tendencies triggered by social media platforms are quite influential.

Although neo-racism, which is based on a discourse of cultural difference, has not been institutionalized in Turkey, neo-racist tendencies are apparent.

Although racism is not institutionalized in Turkey, it is still a fact that anti-immigration discourse is common in the country and is used as a tool in the political arena in order to manipulate the masses. In some municipalities governed by the opposition parties, several racist practices against Syrians have been institutionalized, and such practices encourage assaults and discriminatory acts against immigrants. The anti-immigration sentiments that grow with the support of some parliament members and other public figures are circulated on social media.

Although it is true that the Syrian immigrant population in Turkey has considerably affected Turkey’s demographic structure, fake news about immigrants should not be condoned. Otherwise, the presence of the actors in the opposition parties who look up to Le Pen and Geert Wilders might be institutionalized in the following period, as a result of which Turkey will yield to rising populism across the globe. In this context, it is important to ask this question: If a war breaks out in Europe and there is a serious immigrant inflow to Turkey from countries like Switzerland, France, Germany and Britain, what will be the approach of the politicians who use anti-immigration sentiments as a political tool along with the leftist and social democrat names in Turkey?

The state and non-governmental organizations should speak up on this subject in every platform available to the public. Today, Turkey hosts the largest number of Syrian immigrants in the world and this situation surely brings major sociological consequences. Bureaucracy and civil society should cooperate in developing strategies that will solve the immigration issue in the medium and long terms by taking the sensitivities of Turkish society into account.