Notes from the Border: What Operation Olive Branch means for the Border Towns of Turkey

A young Kilis resident we came across while walking said to us: “When they [terrorists] kill, they don’t care whether we are Turks or Syrians. Here, we are trying to survive together.” 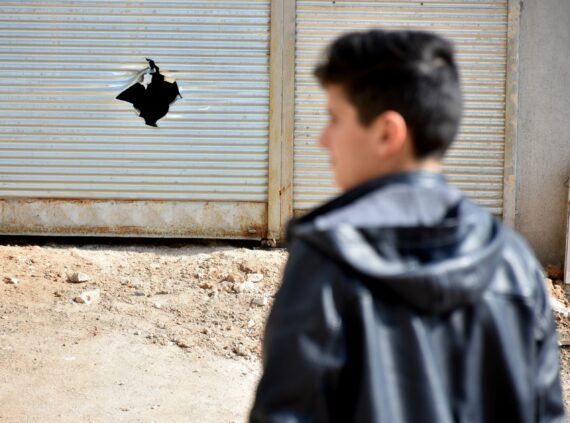 A hole caused by a rocket fired by PYD/PKK terrorists in Syria, on the garage door of the workplace located on the ground floor of a two storey building is seen on February 1, 2018 at Baris neighbourhood of Turkey’s border province of Kilis. Anadolu Agency

With the escalation of the Syrian Civil War, attacks on Turkey’s border towns began to increase from 2012 onwards. In order to refresh our memories, let’s remember that 5 Turkish citizens were killed in the Akcakale district of Sanliurfa on October 2, 2012, as a result of attacks conducted from Syria. Meanwhile, the memories of the bomb attack that took place in Reyhanli on May 11, 2013, are still fresh. There is now a clock tower at the location of the bombing in Reyhanli in order to ensure that the passing time never lets us forget our losses. There were numerous attacks in 2015 and 2016, which caused the death of citizens not only in border towns but also in cities like Ankara and Istanbul. Tens of civilians, most of them being children, were massacred at a wedding in Gaziantep as a result of a suicide bomb attack on August 20, 2016. This was the final straw that led Turkey to launch Operation Euphrates Shield (OES) on the Syrian border on August 26, 2016, with the aim to establish a safe zone in the eastern bank of the Euphrates. The operation was accomplished within 7 months.

After cleaning Daesh from Azez, Jarabulus and al-Bab, with the success of the operation, Turkey provided prominent support in terms of education, health and security to the region in order to establish stability and peace. During my visit to Azez in November, I was able to personally witness the efforts of both the Turkish government and Turkish NGOs in the region. Even though the operation was able to provide some security to the border towns, this time there were instances of harassing fire coming from YPG-occupied regions such as Afrin. Launched at 17:00 pm on January 20, 2018, Operation Olive Branch (OOB) forced Turkey to fight cross-border terrorism with similar motives to Operation Euphrates Shield. In this respect, Operation Olive Branch has three sociological motives: (1) establish security and peace within Turkey, (2) help the local populace that is oppressed by the YPG, and (3) provide a secure way and settlement to Syrians in Turkey who want to return to their hometowns.

Considering that Turkish border towns have become the target of demographic-engineering based on ethnicity and sectarianism that terrorist organizations like the YPG and Daesh tried to achieve in Syria, Operation Olive Branch has both a sociological and historical significance. The sociological motivation behind the operation is what ensures it sociological support.

My visits to Kilis and Hatay prior to Operation Euphrates Shield help me draw a comparison with the contemporary situation. Prior to the OES, Daesh used missile attacks on these cities. When we were frightened by the sounds of two missiles that hit Kilis during a meeting there, those living in the city were rather calm and told us that they were used to it, stating that the missiles had probably fell on an empty field. They seemed careless, but also angry. When I asked for the reason of this attitude, an NGO representative said: “Miss, we are alone here. The people of Kilis are all alone!” For this reason, in comparison to Operation Olive Branch, we were unable to talk about any public support when OES was launched.

In other words, we can assert that there was a lack of social awareness during OES. Meanwhile, I witnessed the solidarity among people in Kilis and Reyhanli, especially those we interviewed during the first week of OOB. We can talk about a higher sociological resilience when compared to the past. Two factors are important in this respect. Firstly, people began to feel more secure in their personal and social lives after OES. Therefore, the success of OES became a leading factor that increased public support and awareness for OOB. A nurse I spoke to who was working at Kilis Public Hospital summarized the shift in public perception with the following words: “Two years ago, we as the people of Kilis, believed that we were all alone. We felt trapped. For this reason, we couldn’t truly understand what OES meant. Now, it’s different. The whole city stands as one.”

During my prior visit to the area, when walking around the cities, I used to often see daytime shows playing on TVs in coffeehouses and stores. However, this time people were watching news channels and following the developments about the operation. When interviewing people, I realized that many of them were using military strategy terms. It was very clear that not only did they care, but they also followed the developments of the operation very closely.

Standing together with Syrians

One of the aspects that I was interested in during my visit to Kilis and Reyhanli was whether the attacks had raised tensions between the local Turks and the Syrian people living there. I previously witnessed tensions caused due to the swift change in demographics. The main reason of these tensions was the failure of extending public services to the region at the same rate that Syrians were moving in. Syrians almost three-fold of the local populace moved into the city. Otherwise, it is false to draw a correlation between Syrians and criminal activities. After 5 years, we can now see that Turks and Syrians have learned to live together.

We visited all the locations that YPG missiles hit in Kilis and Reyhanli and spoke with the local people. Despite the recent mosque attack in Kilis, the city center was surprisingly crowded. We walked around the Asit neighborhood, which harbors classical Kilis houses and came to a Syrian household that was victim of a missile attack. We entered the house and spoke with the people living there. “The missile hit around the evening. There were 10 people in the room. It dropped down from the ceiling. Thank God it didn’t explode, so no one was injured,” the householders said. Seeing the damage, it was a miracle that no one got injured. A young Kilis resident we came across while walking said to us: “When they [terrorists] kill, they don’t care whether we are Turks or Syrians. Here, we are trying to survive together.”

During my visit to patients who survived the YPG’s attack on the mosque at Kilis State Hospital, I met Mr. Hasan who migrated from Aleppo to Kilis 4 years ago. “Thank God the missile hit the mosque after the prayer had already finished. Otherwise, the number of losses may have been higher,” he said. He has 6 children and he provides for the family alone. “I need to get out of hospital as soon as I can and return to my family and my work,” he told me, while adding: “May God help Turkey. We know that if God helps Turkey, he would also be helping us.”

We also went to visit the Kilis Oncupinar Temporary Refugee Center, which is right across the Barsaya Mountain. Since my last visit, the security procedures have become stricter. Even though we got the approved permission by the governorate, we were hardly allowed to enter after a meticulous ID check. There are 12,000 refugees living at the center. We were right at the border with Syria and were able to hear very clearly the sounds of conflict. When we were frightened by every sound of shooting, those living there said: “Don’t worry, those are our missiles.” They had enough war experience to distinguish the sounds of “their” missiles and those that belonged to the YPG. Comparing this with the traumas of the Syrian Civil War, these sounds probably mean little for them. They were saying that when the Turkish Armed Forces and the Free Syrian Army take control of villages near Afrin, missiles would no longer be able to hit the city center of Kilis. Despite the smoke rising from the Barsaya Mountain, children at the camp kept playing with their marbles. Refugees, most of whom came from Idlib, believe that the liberation of Afrin will open the way for Idlib. However, they also told me that the stability of Idlib would be determined with their return.

Communication between the local administration and the local population in border towns is key for the sociological management of Operation Olive Branch. The approach local administrators in the area take are crucial for the operation. For example, a governor I met emphasized that the immediate response and support for the reconstruction of houses damaged by missiles is more important for the management of the people than we assume during a conflict process. The increasing appearance of local administrators, especially of the governor, in social life, would have a sincere effect on the people living in these cities. A local administrator I interviewed stated: “Actually, we had taken certain precautions against the possible provocations during the funerals of those who have been killed by the YPG’s missile attacks. However, there weren’t any incidents. People stood together. This is an important social support and it also allows us to do our work with high morale and stamina.”