Once known for its extraordinary beauty, the valley of Kashmir today hosts one of the biggest, bloodiest and brutal military occupations in the world. As someone who carries Kashmiri heritage and visits the family home in Pakistani Occupied Kashmir (POK) almost every summer – the most recent attacks have been heart breaking and concerning to say the least 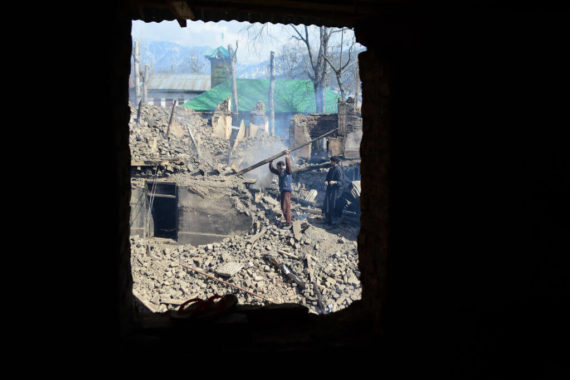 Kashmiri people dismantle the house which was damaged during gunfight between Kashmiri Rebels and Indian Forces in Tral district, Indian Administered Kashmir on 05 March 2019. Getty Images

Once known for its extraordinary beauty, the valley of Kashmir today hosts one of the biggest, bloodiest and brutal military occupations in the world. As someone who carries Kashmiri heritage and visits the family home in Pakistani Occupied Kashmir (POK) almost every summer – the most recent attacks have been heart breaking and concerning to say the least.

In order to be able to properly understand the Kashmir conflict, one feels it is important to firstly look at the roots of the issue and the history behind it, and why it has never been resolved to this day. The valley that was once described as ‘heaven on earth’ by the Mughal Emperor Jahangir, is now nothing short of a blood bath, a battleground for the two neighbouring countries: India and Pakistan.

Tensions between India and Pakistan date back to 15 August, 1947, otherwise known as the birth date of the two post-colonial states which were born out of the partition of British India. However, during the time of partition, the rulers of princely states had the choice of acceding to India or Pakistan, whilst bearing in mind the wishes of their people. However, the decision was delayed by Maharaja Hari Singh – a Hindu ruler of a Muslim-majority Kashmir – in an effort to remain an independent state.

In October 1947, an uprising against the Maharaja had broken out in Poonch, an area that borders the Rawalpindi division of the West Punjab in Pakistan. The revolt came as a result of the Maharaja’s administration levying punitive taxes on the peasantry and as the uprising began, the administration resorted to a brutal suppression. Poonch was an area full of recently demobilized soldiers from the Second World War, who rebelled against the Maharaja’s forces and gained control of a huge part of the area. At this point the Maharaja requests help from India in quelling the revolt and invasion – leading him to sign the Instrument of Accession, acceding Kashmir to India.

Pakistan intervened subsequently, which led to fighting to occur between Indian and Pakistani armies. The fighting led to the first Indo-Pak war, with Pakistan disputing the accession. In January of 1948, India formally referred the issue of Kashmir to the United Nations (UN). Following this, the UN resolution called for an immediate cease-fire and a plebiscite, the UN-brokered cease-fire effectively ended the first Indo-Pak war, with India and Pakistan agreeing to a plebiscite and the withdrawal of troops behind the cease-fire line, leaving two-thirds of Kashmir under Indian control, today we recognize this part of Kashmir as Indian Occupied Kashmir (IOK), the remaining third now remains under Pakistani control and is recognized as POK.

India and Pakistan have fought three wars in total over the Kashmir conflict; in 1947, 1965 and in 1999. However, the official Simla Agreement was not signed until 1972, which re-instated the UN cease-fire line in Kashmir as the ‘Line of Control’ (LoC). A line which is supposedly holding a cease-fire, is described by many Kashmiri people from both sides of POK and IOK as a ‘Khooni lakeer’ which translates to a ‘bloody line’, the reason being that occasional shoot outs and killing has never really stopped.

More recently, the deaths of innocent civilians who live near the LoC have been reported on both sides. To date, more than 80,000 people have died. Although in POK it is much more relaxed in terms of the army’s treatment of the people in Azad Kashmir (POK), in IOK the people of Kashmir face daily arbitrary arrests, curfews, raids and checkpoints by almost 700,000 Indian soldiers. It has even been reported that the valley’s 4 million Muslims are exposed to extrajudicial execution, rape and torture. Children grow up in an environment of fear, violence and hostility towards the Indian Army insurgency and grow up in anger of the Indian government for allowing such barbaric atrocities to occur.

Lately, the two nuclear power nations once again escalated their already tense relations into a risky military exchange. To put things into context, on 14 February, 2019, a suicide bomber killed 46 paramilitary police in IOK in the city of Pulwama. As an immediate reaction to the Pulwama attack, the Indian government immediately blamed its neighbouring country, Pakistan without any real evidence of this. The Indian Prime Minister Narendra Modi directly blamed Pakistan and accused them of having an involvement with the extremist militant group Jaish-e-Muhammad, who have claimed the Pulwama Attack. Following this, on 25 February, the Indian Air Force targeted an alleged seminary of the Jaish-e-Muhammad in the POK town of Balakot. They launched this attack without making any formal investigations regarding the involvement of Pakistan with the group.

Much like in the case of Afghanistan, in Kashmir, when you raise children in environments of fear, violence, anger and hostility, only then do you generate the accessibility of rebel fighters to emerge.

The Indian airstrike not only missed its target but was also largely misinformed in regard to the whereabouts of the base camp of Jaish-e-Muhammad. It was reported that as a result of this airstrike and due to heavy shelling, four people in the district of Kotli in POK were killed, including two children. The failure of Indian intelligence cost the lives of four innocent civilians, of those were two innocent children. Children who should have had a bright future ahead of them. Children who should have been worried about their upcoming school tests and exams, they should not have been put in a position where they feared for their life and certainly should not have had their lives taken from them so soon because of a failed intelligence strategy.

Many of the British Kashmiri diaspora community come from the district of Kotli and Mirpur, who have long campaigned for and protested for the rights of Kashmiri people in both IOK and POK, so when the attacks occur in their native home – you can understand the pain and frustration many of my fellow Kashmiris and I have felt by the inadequate intelligence information of India. One can’t help but feel that the airstrike carried out by India was also a strategy on Indian governing party the BJP for the upcoming general elections in an effort to win over the support of the Indian public to seem like a more proactive government. However, it ended up backfiring.

As a result of the airstrike, the Pakistani army retaliated and on February 26, fired near Indian military positions and shot down an Indian Air Force plane which was flying over Pakistani territory and captured its pilot, Abhinandan Varthaman. However, as the soldier was injured, the Pak army took it upon themselves and treat him. Once he was questioned, the Pakistani Prime Minister Imran Khan, said they would return the fighter pilot to India as a ‘peace gesture’ and invited the Indian PM Modi for the issue to be resolved through means of dialogue and to let ‘better sense prevail’ as a war is something both nations can absolutely not go into since the dangers come to the upmost height as both nations own nuclear weapons, and such a war would become highly destructive. The Indian PM, Modi has yet to respond to the invitation. It is unlikely that he will not respond or agree to meet for talks before the upcoming general election.

Although things seem to have settled, the question of the Kashmir conflict remains and it is likely that the insurgency in IOK is going to toughen up against the Muslims in Kashmir, which once again continues to create a vicious cycle of continues violence and hostility. Much like in the case of Afghanistan, in Kashmir, when you raise children in environments of fear, violence, anger and hostility, only then do you generate the accessibility of rebel fighters to emerge. Rather than constantly mistreating the people of Kashmir and using their space as a constant battlefield, India is more likely to prevent attacks such as Pulwama to occur if they were to stop treating Kashmir as a colony and to treat its people with dignity and respect. To create a safe environment for its people and the children growing up, it is then when they prevent from further rebels from attacking its army and its mainland. Generally speaking, we Kashmiri people hate war and never have once encouraged it because in the end, the only people who end hurt and worse off are us Kashmiris and our beautiful land once again becomes a bloody battleground.

Alia Khan gained a BA in Politics in 2018 from Queen Mary University of London, during which she interned in UK Parliament for Paul Scully MP and assisted him on constituency matters, including researching and reporting on planning and permission issues for Sutton and Cheam as well as creating briefs for transport for London.