Overcoming the Political Crisis in Tunisia: National Consensus and the Role of the Ennahda Movement

It is of great importance that Ennahda and other Tunisian political groups show a unified front against foreign intervention in order to maintain political stability and become a strong democracy. 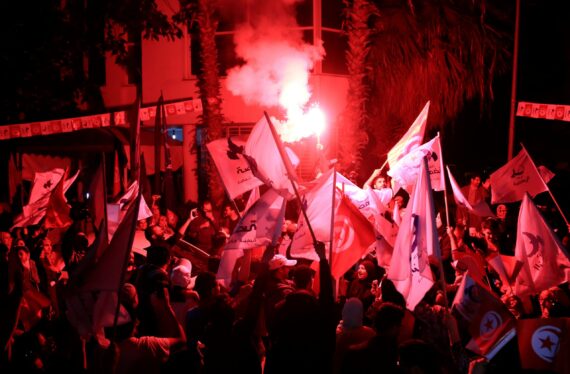 People gather during a celebration as The Ennahda Movement won the local elections after getting 27.5 percent of votes, according to state-run broadcaster on Sunda, in Tunis, Tunisia on May 06, 2018. Anadolu Agency

Unlike many other Arab countries that experienced unsuccessful transition experiences in the post-2011 period, Tunisia has been considered a success story with its exceptional journey from an authoritarian regime to a functioning democracy. Thanks to the culture of reconciliation in the country’s politics Tunisia was able to overcome many political crises since 2011. The key factor for achieving political stability is the consensus that Islamist, secular and socialists groups have so far embraced. The Ennahda Movement, for instance, had even sacrificed the leadership position in 2013, in order to overcome a political crisis that the country experienced in the summer of that year. The group withdrew from the government and accepted to work with technocrats for the transition period. This was a key move that prevented the deepening of the crisis.

Thanks to the culture of reconciliation in the country’s politics theTunisia was able to overcome many political crises since 2011.

This withdrawal of Ennahda, however, had a negative effect on the perception of the party in the eyes of its voters. The party bore the consequences in the parliamentary elections in 2014, as they experienced significant losses in terms of votes. Nevertheless, the party continued to be an important actor in the political scene and played a serious role in the successful continuation of the post-revolutionary transition period in Tunisia.

Despite the relative stability, the country’s political life has also problems that have the potential to harm the transition period. Particularly, the developments that have been experienced during the last two months are increasingly jeopardizing political stability in Tunisia.

Prime Minister Youssef Chahed’s dismissal of Interior Minister Lotfi Brahem on June 6 has triggered a controversial period in the country’s politics. It is argued that the minister was sacked as a result of a boat accident, where up to 80 Tunisians migrants died in the Mediterranean. However, a number of international media outlets and observers suggest that there was another reason for that development.

It is argued that the Interior Minister Breham met with the head of the intelligence service of the United Arab Emirates in Djerba on May 29 and they discussed the possibility of a regime change in Tunisia, similar to the one that took place in July 2013. According to the plan put forward by the UAE official, the Prime Minister would be removed from office and replaced with Kamel Morjane, who was the former Defence Minister during the deposed President Zeinal Abidin Ben Ali.

It is claimed that the main purpose of this Emirati plot was to exclude the Ennahda movement from Tunisian politics.

It is claimed that the main purpose of this Emirati plot was to exclude the Ennahda movement from Tunisian politics. This is part of a much bigger strategy of the Emirati leadership that targeted the Islamic political actors in the Middle East. The first example of this was the Muslim Brotherhood leadership in Egypt. The UAE-backed local groups initiated a military coup that toppled Mohammed Morsi. The military regime in the country started a crackdown on the members of the Muslim Brotherhood.

A similar scenario would be thought for Tunisia, as the Ennahda movement has gradually increased its power in Tunisian politics. Despite its low profile during the past years, the movement won the local elections last April by receiving 5% more votes than its biggest rival Nidaa Tunis. The Ennahda movement has also continued its civil activities in the fields of economy, social solidarity, culture, religion, and youth.

The Ennahda movement has long been the target of a region-wide anti-Muslim Brotherhood alliance led by the United Arab Emirates, Saudi Arabia, and Egypt. This alliance aims to remove all Islamic political movements such as the Muslim Brotherhood and is making an intense effort in this context. These countries have also considered the Ennahda movement as a close associate of the Muslim Brotherhood. As a result, they have been involved in Tunisian politics since the revolution in 2011 and aim to exclude Ennahda from politics.

Despite such external interventions, the political groups in Tunisia, especially Ennahda, have been sensitive about continuing the stability by choosing the path of reconciliation. Following his meeting with President Beji Caid Essebsi, Ennahda leader Rachid al-Ghannouchi emphasized that the consensus must be achieved in order for the Tunisian revolution to remain a successful example.

It is of great importance that Ennahda and other Tunisian political groups show a unified front against foreign intervention in order to maintain political stability and become a strong democracy.

Eventually, these efforts have been successful and Prime Minister Youssef Chahed has appointed Hichem Fourati, who has been working in the Interior Ministry for many years, as minister. Following the vote of confidence in parliament, Hichem Fourati started his duty on July, 31, ending the two-month-long political crisis.

Foreign actors have not succeeded in their attempt to shape Tunisia’s politics according to their interests. However, it is expected that the governments of Egypt, the UAE, and Saudi Arabia are expected to maintain their campaign against the Ennahda movement in Tunisia. They will continue to work for preventing the possible success of Ennahda in the upcoming presidential and parliamentary elections, which will take place in late 2019. Therefore, it is of great importance that Ennahda and other Tunisian political groups show a unified front against foreign intervention in order to maintain political stability and become a strong democracy.