China accelerates the modernization and expansion of its nuclear forces. 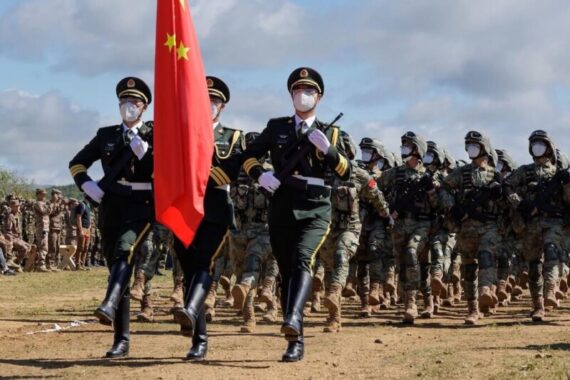 hina continued to accelerate the modernization, diversification, and expansion of its nuclear forces, according to the U.S. Defense Department 2022 report on its military and security developments.

These developments came within a broad plan of the Chinese Communist Party (CCP) to modernize various sectors, including those of the military, security, and defense. China’s defense budget increased by 6.8% to $261 billion in 2021, the U.S. report noted.

The report stressed the efforts of the CCP to “ensure absolute leadership of the CCP over the military” in order to achieve the party’s “broader societal and foreign policy objectives,” based on China’s National Defense in the New Era white paper.

The report indicated that China seeks to rely more on the People’s Liberation Army (PLA) and develop its military capabilities, especially its “system of strategic deterrence.” Moreover, it referred to “intensifying and accelerating the PLA’s modernization goals, to include deploying PLA forces on a regular basis and in diversified ways.” The report also expected that the PLA could be used by the CCP to unify Taiwan.

Read: The US and China Semiconductor Rivalry: What Are the Stakes?

In order to develop its military capabilities, China has adopted the Military-Civil Fusion (MCF) development strategy, which aims to “develop the People’s Liberation Army into a world class military by 2049.” This strategy is based on melding the civil and military sectors through the use of technology and civilian research in the service of the CCP’s military project.

In addition to mentioning China’s military goals and strategies, the report dealt with Beijing’s nuclear capabilities and its plan to develop this sector.

The U.S. Department of Defense estimated that China’s operational stockpile of nuclear warheads could reach 1,500 by its 2035 timeline. “China is establishing new nuclear materials production and reprocessing facilities very likely to support its nuclear force expansion,” the report added.

China increased its nuclear modernization efforts in both scale and complexity. It also increased the number of nuclear delivery platforms and constructed necessary infrastructure for the development of its nuclear capabilities.

The report stated that China has nearly 300 ICBMs [intercontinental ballistic missiles] and has started to “establish additional nuclear units and increase the number of launchers in mobile ICBM units from six to 12.” These missiles constitute China’s primary land-based nuclear forces. China complemented its strategic arsenal by short-range and road-mobile ballistic missiles “capable of ranging targets in the Indo-Pacific region.”

As far as sea-based nuclear forces, China likely began “near-continuous at-sea deterrence patrols with its six operational JIN class SSBNs [United States Navy classification for nuclear-powered ballistic missile submarines], which are equipped to carry up to 12 SLBMs [submarine-launched ballistic missiles].” The report also mentioned that China is likely to begin constructing its next-generation Type 096 SSBNs in the early 2020s. It expected that China “will operate its JIN and Type 096 SSBN fleets concurrently.”

The report found the fielding of newer, more capable, and longer ranged SLBMs will give the People’s Liberation Army Navy (PLAN) “the ability to target the continental United States from littoral waters” and allow it “to consider bastion operations to enhance the survivability of its sea-based deterrent.”

As for its air-based nuclear capabilities, the People’s Liberation Army Air Force (PLAAF) “has operationally fielded the H-6N bomber, providing a platform for the air component of the PRC’s [People’s Republic of China] nascent nuclear triad.” The H-6N bomber added “an air-to-air refueling probe,” in addition to its ability to allow “external carriage of an air-launched ballistic missile (ALBM) assessed to be nuclear capable.”

The Chinese strategy to use nuclear power is “based on PLA deterrence of an enemy first strike and counterstrike when deterrence fails, threatening retaliation against an adversary’s military capability, population, and economy.”

This strategy is also expressed by the public declaratory policy of “no first use” (NFU). That policy states that China will never be the first to use nuclear weapons in a conflict. It means Beijing will “keep its nuclear capabilities at the minimum level required for maintaining its national security.”

Although the PLA has insisted that its nuclear policy has remained clear and consistent, the report saw that “it is unclear whether the buildup of the PLA’s nuclear arsenal may influence or change the PRC’s nuclear strategy in the future.”

The Pentagon report raised doubts about this strategic change in Chinese nuclear power that this is the change China is seeking to grow and transit from a “large country” to a “powerful country.” This means that China needs to grow its military capabilities in order to protect its new growing interests.

The report stated that China is working on a national strategy to achieve a national rejuvenation, or the “Chinese dream” as General Secretary Xi Jinping called it, by 2049. The Chinese strategy relies on strengthening and developing the government’s political, military, security, and social elements. It aims to give China more leading positions on the world stage through the implementation of comprehensive policies aimed at providing the country with the necessary elements of strength.

China also aspires to bring about structural changes in the international order and present itself as a competitor to the United States. For example, the report referred to China’s approach to the Corona pandemic, namely providing foreign medical assistance “for strategic political purposes.” In addition, China deepened its relations with countries in Africa, Latin America, and the Middle East through projects in public health, digital infrastructure, and green energy opportunities.

In addition, the report spoke of China’s “dual circulation” economic policy, pointed out by President Xi Jinping during the 20th National Congress of the Communist Party of China. This policy is based on reducing the role of foreign supply chains and developing local production, in addition to boosting the role of domestic consumption within China’s economy. With this strategy, China wants to reduce dependence on foreign countries, especially the West, which would give it greater freedom to complete its political and economic rise.

The report found that China has developed a comprehensive plan covering all sectors. For instance, China’s economic policy is not separated from its military ambitions, but rather is responsible for providing the necessary financing to support the efforts of the military modernization plan.

Omar Awad received a B.A in Journalism and Media Communications. His areas of interest are Middle East politics, soft power and media studies.