People of Color and Politics in the West: A New Trend?

Greater involvement of people of color and immigrant background in political life, of becoming active actors and policymakers will have a positive impact on their lives and their communities 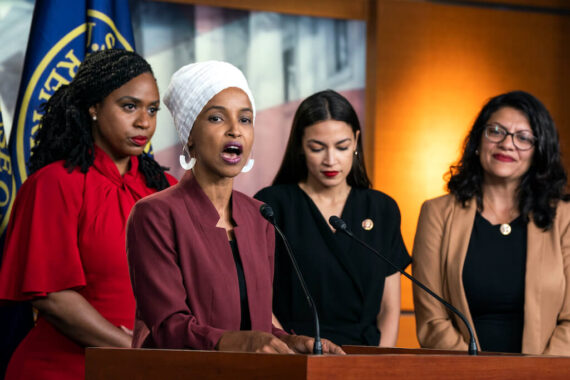 Four members of the US House of Representatives Ilhan Omar, Rashida Tlaib, Alexandria Ocassia Cortez and Ayanna Pressley responded to Trump’s violation of the constitution with a joint press conference. Photo by Jim Lo Scalzo, EPA via Anadolu Images

Following the end of colonialism which saw the enslavement and migration of hundreds of thousands of people who were brought to foreign lands to serve the interests and wishes of their colonizers, immigrants had to survive by doing manual jobs. In this context, political engagement was severely hindered, if not completely impossible.

The new generations and descendants of these slaves and the new immigrants, however, grew up in different circumstances. Unlike their ancestors, they felt grounded in these new lands, which they came to call their home.

The path to citizenship for people of color was not easy. In the United States, the Civil Rights Movement was able to achieve success, although not a full and a decisive one, in the 1960s, after long years of fighting for equal rights for black people. People of color had to overcome many challenges to be able to engage in politics and to achieve representation.

Growing up in post settler-colonial societies such as the United States and New Zealand and having received the necessary education and skills, the younger generation had a different view of their new home countries and treated the political establishments differently.

Usually, the first generation of immigrants struggle to find work in order to survive. They have to learn a skill that helps them find their way in a foreign place in addition to facing cultural, economic, political, and assimilation challenges.

Their children, however, tend to have fewer such problems; they learn the language and culture of the countries they are in and adapt to their lifestyles.

The second and third generations of immigrants feel that their home is where they were born, although they might not forget their cultural heritage. They find their way in society more easily despite facing problems related to racial discrimination and family pressure.

Read: From the Nixon-Reagan Tapes to Trump’s Tweets: Racism Has a Tradition in US Politics

NEW YORK, USA - MAY 20: A group of people hold a demonstration to support U.S. Representative Ilhan Omar at 7th Avenue near of the Times Square in New York, United States on May 20, 2019. Photo by Atılgan Özdil. Anadolu Images

The second and third generations of immigrants tend to be more involved in politics. This includes family and informal political debates, being involved with political groups on campus, being part of political parties and movements, leading the masses to bring about change, and ultimately running for political posts.

The second and third generations of immigrants tend to be more involved in politics. This includes family and informal political debates, being involved with political groups on campus, being part of political parties and movements, leading the masses to bring about change, and ultimately running for political posts.

Recent years have seen a trend in countries such as the United States, the United Kingdom, and New Zealand, among others, of second- and third-generation immigrants who feel politically empowered and who want to be part of bringing about a political change.

In the United States, more and more people with migrant backgrounds started actively participating in politics and forming groups that seek to be part of the political scenes of their country. Recent years have seen the election to the U.S. Congress of more radical and younger voices that call for political, economic, and social change.

This includes what is known as “The Squad,” a term that was used following the 2018 congressional elections, which includes four female members of congress: Ilhan Omar, Ayanna Pressley, Rashida Tlaib, and Alexandria Ocasio-Cortez.

The four congresswomen advocate for more radical changes in U.S. domestic and foreign policies. Following a fierce smear campaign against them by President Donald Trump, all four were re-elected in 2020.

The grandmother of Rashida Tlaib, member of the US congress, is holding a family photo in the West Bank after Tlaib decided to call off her visit to her family following Israeli restrictions. Photo by Issam Rimawi. Anadolu Images

Palestinian-American Iman Jodeh is the first Muslim American to be elected to represent the 41st district in the Colorado House of Representatives in the 2020 general election, becoming the first Muslim lawmaker in the state’s history.

Leaving behind a war-torn country, Ilhan Omar arrived in the United States as a refugee from Somalia and is a U.S. representative for Minnesota’s 5th congressional district. Rashida Tlaib is of Palestinian origin and is serving as the U.S. representative for Michigan’s 13th congressional district, which has a large presence of Arab and Palestinian voters.

Alexandria Ocasio-Cortez also fought a hard battle to get to the U.S. Congress when she ran against Democratic Caucus Chair Joe Crowley, a 10-term incumbent, defeating him and becoming a national sensation.

The Squad was doubled in 2020 with the addition of more members. The 2020 elections in the U.S. were remarkable in the sense that they saw the election of more Native American representatives to the US Congress such as Deb Haaland, who, if confirmed, will become the first Native American Secretary of State under President Biden.

Palestinian-American Iman Jodeh is the first Muslim American to be elected to represent the 41st district in the Colorado House of Representatives in the 2020 general election, becoming the first Muslim lawmaker in the state’s history.

In a webinar organized by American Muslims for Palestine, Jodeh said, “We need immediate criminal justice reform; I will do it from the lens of a practicing Muslim Palestinian Arab woman of color.”

“I read and learned more about the United States system, I wanted more involvement. I contacted my local party and started passing out fliers and going door to door during the local election. As time passed, I wanted to make more of a difference because I started to help my community who did not speak English to fill out forms and take advantage of certain benefits the state offered. This brought me to the idea that with politics I can do more, but I had to start from the bottom and this is what I did,” Taskin said.

This trend, although late, is not limited to the United States. In New Zealand, following national elections in October 2020, more progressive faces made it to parliament. New Zealand saw the election of 16 indigenous Māori MPs; Vanushi Walters of Sri Lankan origin; and Ibrahim Omar of Eritrean heritage.

Speaking at the New Zealand Parliament, Omar said, “I am an Eritrean, I am a son, a brother, a friend, I am a Muslim, I am a former refugee, I am a trade unionist and a living wage activist, but most importantly, I stand here today in front of you bursting with pride as a Kiwi who loves New Zealand/Aotearoa.”

This trend of greater involvement of people of color and immigrant background in political life, of becoming active actors and policymakers will have a positive impact on their lives and their communities.

It is a hopeful trend that needs to be expanded so that multiracial societies have a more representative political system that encompasses all of societies’ members as important pillars.