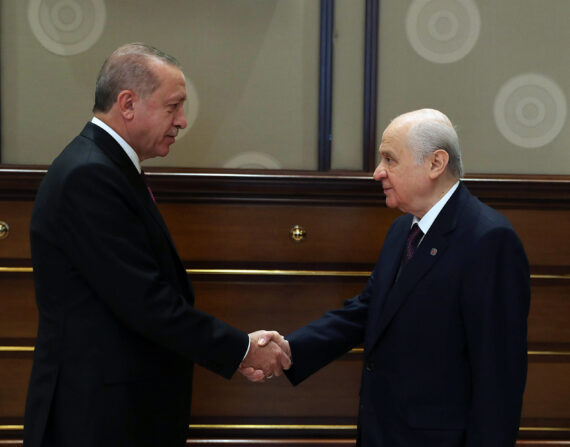 Although the AK Party and the MHP announced that they were not going to form an alliance for the upcoming local elections last month, the latest incidents forced them to come together under the People’s Alliance. The leaders of both parties held a meeting last week in order to discuss the possibilities and limitations of forming an alliance, and both leaders reflected positively on forming one.

Before evaluating the reasons behind the re-emergence of the alliance, it is crucial to remember the reasons why the parties failed to form the alliance a couple of weeks ago. The AK Party and the MHP experienced a clash of interests on two issues. The first was on granting a partial amnesty for some prisoners, which the MHP fully supported and the AK Party was critical of. The second issue was the Council of State’s decision on the Student Oath. While the MHP applauded the decision, the AK Party harshly criticized it. As a result of these two crises, the parties announced that they were not going to form an alliance in the upcoming local elections.

The leaders of the AK Party and MHP have once again agreed on forming an alliance in the local elections in Turkey. Thus, the People’s Alliance has once again emerged as a game changer in Turkish politics.

Nevertheless, due to the latest mobilization within the opposition block, the parties had to change their stance in forming an alliance. The leader of the CHP started to seek for an alliance and had a meeting with high-ranking officials in the Iyi Party and HDP. Even if the reflections of the meeting with the HDP are still not clear, it is almost certain that the CHP and Iyi Party will form an alliance. As it was underlined in the press, both parties will pursue limited cooperation and collaboration in the local elections by nominating joint candidates in 9 provinces including Istanbul, Ankara, Izmir, Eskisehir, Antalya, Mersin, and Adana.

The mobilization of the opposition block might damage the success of the People’s Alliance in the upcoming elections and in its aftermath. If the opposition block ensures to form an alliance in critical provinces while the members of the People’s Alliance join the elections separately, the People’s alliance may lose some votes in critical provinces. Moreover, since the main aim of the members of the Nation’s Alliance is making Turkey’s presidential system a controversial issue, they will try to destabilize Turkey’s presidential system and impose their false agenda after the elections.

The fact that the AK Party and MHP joined around the same table again proves that the consolidation of the People’s Alliance has already provided and that parties in this alliance can make any sacrifice to serve the principles of the alliance.

The AK Party and the MHP made a clever move in coming together to discuss the possible outcomes of this failure. Both parties founded their own delegation in order to maintain healthier discussions. The MHP’s support to the AK Party’s possible candidates in three major provinces increased mutual sympathy and tolerance again. President Erdogan thanked Bahceli for his commitment to the alliance. As a result of this, it is possible to broaden the boundaries of this alliance in the following days.

Consequently, after facing a serious crisis and handling it successfully, the AK Party and MHP are at the same table once again. This process proves that the consolidation of the People’s Alliance has already provided and that parties in this alliance can make any sacrifice in order to serve the principles of the alliance based on the country’s national values, unity, and solidarity.