Founded by the PKK terrorist organization in 2003, PYD developed into a critical actor in Syria after 2011. Currently led by Salih Muslim and Asya Abdullah, the organisation has adopted an official ideology chiefly driven by radical leftist discourse; moreover, it advocates the political vision of Abdullah Öcalan, a leading figure of the PKK and an arrestee in Turkey since 1999. 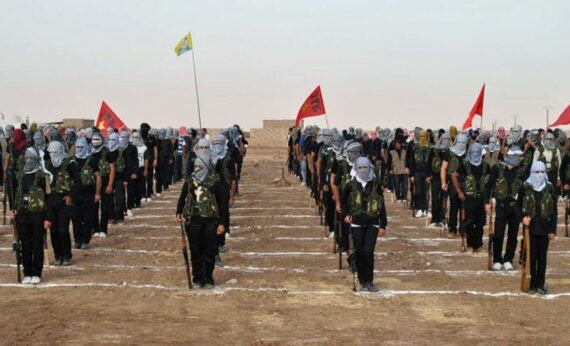 Founded by the PKK terrorist organization in 2003, PYD developed into a critical actor in Syria after 2011. Currently led by Salih Muslim and Asya Abdullah, the organisation has adopted an official ideology chiefly driven by radical leftist discourse; moreover, it advocates the political vision of Abdullah Öcalan, a leading figure of the PKK and an arrestee in Turkey since 1999. The PYD’s headquarters is located in the Syrian town of Qamishli and, according to its constitution, the organisation pursues the objective of securing and spreading the “Apoist” ideology (referring to Öcalan) in northern Syria, called Rojava by many Kurds.

Today, the relationship between PYD and PKK is debated and, in fact, deliberately concealed by rhetorical manoeuvres. However, the question of how to engage legally with the PYD remains controversial as it is clearly the Syrian branch of the PKK, an officially recognized terrorist organization by many authorities like the EU and the USA, Turkey’s allies. However, recent developments on the Syrian ground show that the US government does not hesitate to collaborate with such a PKK-affiliated organization as a leverage tool, even as it considers cooperating with al-Qaeda-affiliates as a support for terrorism. However, if one looks at the PYD’s constitution, the PYD openly accepts the Kongra-Gel (People’s Congress of Kurdistan) as the ‘highest legislative body’, indicating that both PKK and PYD are operating under the same umbrella. In addition, the organisational structures, symbols, discourses and, more importantly, Abdullah Öcalan’s identity as the natural-born leader of all Kurds leaves no room to discuss the PYD’s affiliation with PKK. Can it now be classified as a terrorist organisation, or is it just a harmless political party?

YPG’s Role in the Syrian Crisis

Most of Northern Syria is now de facto ruled by an administration built on a ‘social contract’, which orders how each canton should be organised and governed. This contract, signed by several parties on January 6, 2014 in Amuda, shows similarities with the KCK system[1]. Despite the PYD’s claim of democratic pluralism, it constantly uses YPG, PYD’s armed group, to designate positions to their own men in the councils generated by the contract. Relying on military might rather than the people’s will reflects the undemocratic character of the PYD’s political ideology. Oppositional Kurds are mostly represented by the Kurdistan Democratic Party of Syria (PDK-S) and the umbrella organization of Kurdish National Council (KNC). Since the beginning of the civil war, they have always sided with the Syrian opposition against the Assad regime. However, observations make it clear that the oppositional Kurds are strongly oppressed by Assad-backed PYD sympathizers and their militias. Eventually, the majority of PDK-S and KNC members have been pacified and forced to flee to Turkey or the Kurdish Regional Government (KRG) in Northern Iraq. Under these circumstances, it is nearly impossible for the PDK-S and other KNC-affiliated groups to aspire for new policies and declare real, non-pragmatic demands.

It is striking to observe how a militia group could gain so much territory during the turmoil in Syria. Just to remember, the YPG took control of Ain al-Arab, Amuda and Afrin just in a few days and without a serious fight. If one looks at Qamishli now, it is no secret that the Assad regime troops and the YPG militias are acting together and cooperating to ensure their goals. This partnership brings mutual benefits to both. YPG, which was built on the model of PKK’s armed wing HPG, specifically cooperated with Assad’s troops, got direct help from the PKK and was successful in muzzling oppositional Kurds in the region. The declaration of autonomous cantons in Northern Syria is actually an experiment done within the geographical laboratory of Rojava, a manifestation of the hitherto theoretical paradigm which the PKK wants to benefit from and has tried to implement for many months in Turkey.

In addition, benefiting from DAESH’s presence in Syria, PYD has presented itself as a multi-tool for the USA and Russia. Nowadays, PYD has representative offices in some states and the YPG has also begun to set up bureaus as well.

PYD appears to be an actor with different faces. Imagine a political party in Europe which ensures regional security via its own militias. What would the European reaction be, for instance, if the Bavarian CSU used militias to protect its federal borders and its people? Obviously this sounds abnormal, but exactly this is happening in Syria. Benefitting from the turmoil and the absence of a state authority in Syria, PYD uses the YPG to enforce its ideology. Step by step, it is causing the disintegration of Syria to achieve an independent state through firstly declaring autonomous cantons and then declaring a federation. It is the same approach exercised by the KRG in Iraq and their way to autonomy. Some classify the KRG as a quasi-state, but today it is easily possible to observe that the PYD is exactly striving for the same.

The PYD is using illegal and unconventional methods to justify its legitimacy, forcing mostly Arabs and Turkmen to migrate, evacuating villages and using child militias. Just as the PKK threatens the people of Turkey, the PYD is doing the same with its armed militias in Syria.

PYD’s Own Conflict of Legitimacy: A Strategy?

According to some human rights organisations such as Amnesty International and Human Rights Watch, PYD repeatedly violates basic human rights in the regions it controls. Attempts to stop these violations constantly fail. For example, Geneva Call announced that, after the signing of an agreement, the YPG demobilized nearby 150 child soldiers from battlefields. However, Kurdwatch, a project based in Berlin, revealed that, after the agreement, countless children have died on battlefields.

Nowadays, the PYD is following a strategy to justify itself through opening foreign offices in Western cities. This is accompanied with the PYD’s attempt to detach itself from its military wing, the YPG. After US armour and ammunition helped the YPG through the Syrian Democratic Forces, some disputes arose between the military and the political wings of the PYD. Redur Khalil, the YPG spokesperson, admonished Salih Muslim indirectly as the latter openly stated that the US government is directly supporting the YPG with weaponry. The most important point in Khalil’s message was that Muslim should not interfere with issues that he does not know about. Some may argue that there are serious disputes between PYD and YPG, and this differentiation is to lead one to think that there is a more moderate wing that could be included to the peace talks for example. Others claim that this differentiation between PYD and YPG is just a strategy to provide legitimacy to a terrorist organization and make it at least tolerable for the Turkish government. The second perspective is more likely, and, today, it is not easy to foresee if this strategy will work out.

Many investigations and public records prove that the PYD is a terrorist organisation, a violent non-state actor. Benefiting from the absence of a functioning state, YPG is fulfilling all requirements to be classified as such. Additionally, its clear connection to the PKK, a terrorist organisation identified by the EU and the US, must lead to the conclusion, that the PYD and its affiliates are also terrorist groups. Therefore, the allies of Turkey should give up making rhetorical differentiations between the PKK and PYD, if they really want to re-establish the order and security in Syria.

[1] Group of Communities in Kurdistan, an umbrella organization founded by PKK to implement Abdullah Öcalan’s ideology in Kurdish regions.