Will McGurk engage with Turkey on Syria or will he continue to provoke his country’s strategic partner by cooperating with a group Ankara views as terrorist? 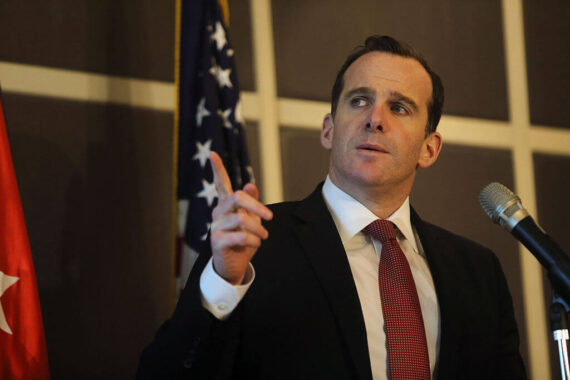 Brett McGurk, the U.S. Special Presidential Envoy for the Global Coalition to Counter ISIL, speaks during a press conference on May 15, 2016 in Amman, Jordan. McGurk met with King Abdullah II and senior officials during his visit to discuss the fight against ISIL. (Photo by Jordan Pix/Getty Images)

After a pandemic-restricted election campaign, Joe Biden officially became the 46th president of the United States in an inauguration ceremony under heavy security measures on January 20, 2021. During his inauguration address, he outlined the task ahead of his administration. Biden signaled that rebuilding coalitions and with the words, “Here’s my message to those beyond our borders. America has been tested, and we’ve come out stronger for it. We will repair our alliances and engage with the world once again.”

While the White House has expressed a desire to “repair alliances,” how convinced are Washington’s allies in the Middle East, and especially Turkey? Relations with the longtime NATO ally have steadily deteriorated over the past years. U.S. support for a Kurdish paramilitary group in Syria known as the YPG has been a particular flash point between the two allies. While Washington has used the group to combat Daesh (ISIS) in northeast Syria, Ankara has expressed concern due to the group’s status as the Syrian arm of the PKK, a designated terror group by both the U.S. and the European Union.

The relationship between the U.S. and the YPG was established in 2014 under the Obama administration. Although there is no official word from the White House about the U.S. policies in the Middle East, the presence of many Obama-era officials in the Biden administration gives us a glimpse into what to expect going forward.

WATCH: How the PKK/YPG Exploits Female Members of the Organization

Most worrying for Turkey among Biden’s appointments is the return of Obama’s “defeat ISIS” envoy Brett McGurk as the Middle East and North Africa (MENA) czar on the National Security Council. Ankara views McGurk as the architect of the partnership between Turkey’s longtime ally and its archenemy, the PKK, a Marxist separatist Kurdish movement which has been carrying out acts of terrorism for forty years in Turkey’s southeast region.

McGurk’s worldview has been painted by the war on terror paradigm, just as that of the former U.S. president George W. Bush.

McGurk started his career at the State Department during the presidency of George W. Bush. Despite a transition to a Democratic administration in 2008, McGurk stayed on and was appointed as the special presidential envoy for the Global Coalition to Defeat ISIS in the Obama administration. McGurk continued to head the effort to defeat Daesh under Republican president Donald Trump until December 2018, when he resigned after opposing his commander in chief’s decision to withdraw American forces from Syria.

McGurk’s worldview has been painted by the war on terror paradigm, just as that of the former U.S. president George W. Bush. This ideological position, which has a black-and-white view of terrorist groups, led him to take decisions eschewing sovereign states like long-time NATO ally Turkey in favor of using questionable non-state actors to fight terrorists in Syria. Unfortunately, the geopolitical ramifications of these decisions were never taken into account.

During McGurk’s tenure, the U.S. funded and armed the YPG, which was rebranded under the umbrella of the Syrian Democratic Forces (SDF). While McGurk tried to make the SDF more acceptable to Turkey by adding a multiethnic dynamic to the newly formed proxy group, the majority of the corps and command structure was dominated by the YPG and former top-level PKK elements.

With strong U.S. air support and intelligence sharing, the SDF was able to score moderate success against Daesh. However, tensions in the Arab-majority regions controlled by the Kurdish-minority SDF began to escalate due to poor governance by the group.

Furthermore, many Syrian Kurds were unhappy with the Marxist authoritarian rule that was being implemented. In addition, elements inside the SDF began to support actions of factions which aimed to destabilize areas under Turkish influence west of the Euphrates.

Following the rebranding of the YPG, McGurk successfully managed the perception of his new proxy group, painting the Marxist group as “secular” and the “best” option against Daesh.

The SDF’s seizure of Syria’s natural resources like the country’s oil and gas fields also created problems with not only the Assad regime but also the legitimate opposition. Many began to view the SDF as a group that wanted to fracture the territorial integrity of the country – and the group’s actions supported these concerns.

Following the rebranding of the YPG, McGurk successfully managed the perception of his new proxy group, painting the Marxist group as “secular” and the “best” option against Daesh. This was supported by a campaign propagating that much of northeast Syria was Kurdish, when in fact many cities in the region like Raqqa and Deir ez-Zor have strong Arab majorities. The Western mainstream media quickly began to introduce the YPG/SDF as “freedom fighters” and proponents of women’s rights, overlooking the many human rights violations committed by the group.

McGurk worked to legitimize the group by arranging meetings between U.S. officials and senior members of the YPG/SDF in northern Syria. As an envoy in the fight against Daesh, he was also very active on social media. On February 1, 2016, he tweeted, “Paid respects to over 1,000 Kurdish martyrs from Kobani battle. ISIL’s siege was broken 1-year ago last week.” A day after his tweet, photos of his visit were published.

One of the photos showed him receiving an appreciation plaque from a man in YPG uniform. That man was Polat Can, a senior member of the PKK terrorist organization. On May 17, 2017, McGurk held another meeting which brought together U.S. officials and senior members of the YPG in Raqqa, including Mazloum Kobani, (a code name) and the commander in chief of the SDF and the alleged adopted child of PKK founder Abdullah Ocalan. Kobani is viewed as a top-level terrorist by Turkey, which has issued a red arrest warrant against him and labeled him a high-value target.

The seeds of McGurk’s plan to partner the U.S. with the YPG were actually conceived in Iraq. In 2014 as Daesh was converging on the Syrian town of Kobani, Lahur Talabani, the co-president of the Patriotic Union of Kurdistan (PUK), had arranged a meeting between McGurk and Mazloum Kobani in Sulaymaniyah. It was at this meeting that the idea of U.S. support for the YPG was hatched. After the meeting, McGurk gave guarantees that the U.S. would support the YPG against Daesh.

Kobani followed up his meeting with McGurk by visiting the powerful commander of the Iranian Revolutionary Guards’ elite Quds Force Major General Qasem Soleimani. The YPG commander wanted to ease Iranian concerns and gave assurances that their alliance with the U.S. would not be against Iran’s activities in Syria.

McGurk’s Back in the Saddle

After a two-year hiatus, Brett McGurk is back in Washington with an expanded portfolio that covers the Middle East and North Africa. According to media reports, he has already assigned ex-staffers like State Department veterans Sam Parker as Iran’s director and Zehra Bell as Iraq and Syria’s director. Parker and Bell both served under McGurk during his time as special presidential envoy to the Global Coalition to Defeat ISIS.

While McGurk has been relatively quiet since his appointment, his many media appearances after his resignation during the Trump administration signal that his outlook on Syria has not waivered.

However, the geopolitical landscape of Syria has greatly changed. Both Turkey and Russia have expanded their areas of influence. The new realities on the ground will greatly complicate and hinder McGurk from adopting old policies. Will McGurk seize this opportunity to engage with Turkey on Syria or will he continue to provoke his country’s strategic partner by cooperating with a group Ankara views as terrorists? At the moment, the latter looks much more likely.