Politics in the Middle East after the Khashoggi Murder

“The murder of Jamal Khashoggi is an extraordinary situation as it was committed in the consulate. It’s difficult to find such examples in history.” 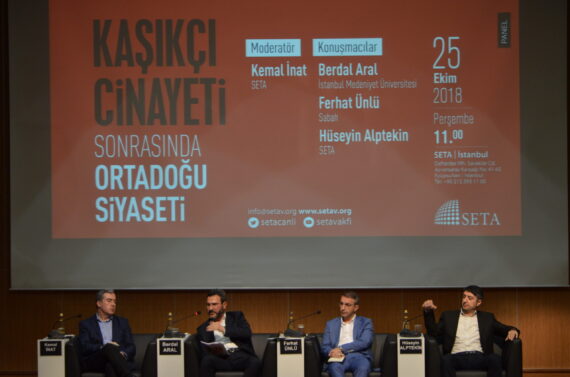 From left to right, Kemal Inat, Berdal Aral, Ferhat Unlu, and Huseyin Alptekin, during the panel at SETA Istanbul on 25 October, 2018.

The SETA Foundation held a panel today in order to discuss the possible effect that the Jamal Khashoggi can have on the politics of the Middle East.

Before starting the panel, Kemal Inat stated that there were three aspects to the Jamal Khashoggi case. A humanitarian aspect, regional and international politics aspect, and finally an aspect regarding Saudi Arabia’s domestic politics.

In terms of the geopolitical consequences, Inat underlined how the fact that the event took place in Istanbul could have the potential to reconstruct foreign policy with countries close to Turkey. Second, the fact that Jamal Khashoggi was a columnist for the Washington Post automatically puts the U.S. in the frame, and thus event has given the opposition the opportunity to utilize Trump’s closeness with the Saudi regime in the upcoming mid-term elections. Finally, the fact that Saudi Arabia is the only prominent regime in the region that is supporting Israel, also brings a question as to whether this event will have the consequence of changing Israel’s place in the geopolitical spectrum.

He first began by informing the audience of diplomatic immunity, as this was an issue that has been laid on the table after the Saudi consulate general refused to allow Turkish authorities to search the consulate.

While he highlighted the immunity provided to diplomats, Aral highlighted that these diplomats, are by international law, “required to respect the rule of law in the hosting country and are forbidden from using the diplomatic missions for events apart from national policy.”

“The murder of Jamal Khashoggi is an extraordinary situation as it was committed in the consulate. It’s difficult to find such examples in history.”

This event also damaged Turkey. It was a “disrespect to its national sovereignty.”

“There is a violation of international law.”

Berdal Aral also emphasized how Saudi Arabia has tried to extend its use of force to a different country, which is why this event, the way it took place, the actors involved, and the consequences that will be drawn from it, “are nothing like the events we’ve seen before.”

Referring to Turkey’s President Recep Tayyip Erdogan’s call for the people involved in the murder to be held to account in Istanbul, Ardal explained that this was in Turkey’s right to request to do so. However, he also reminded the audience that not only will Saudi Arabia resist, but they also have to uplift the diplomatic immunity of the consulate workers in order for a judicial review to begin.

Echoing statements made by Berdal Aral, Ferhat Unlu, a journalist from Sabah, also highlighted how the Jamal Khashoggi case was different from previous ones.

“There have been many murders since the Cold War committed by intelligence services. However, this one is very different.”

“The Saudi officials didn’t even feel the need to provide fake ID to the people that flew here [to Istanbul] to commit the murder.”

Although there is no concrete evidence that Saudi Crown Prince Mohammed bin Salman ordered the murder, Unlu stated how it’s extraordinary for people that can be described as the Prince’s “right-wing men” to commit such a crime without having their identities covered.

It’s clear that all members of the hit squad are close allies of MbS, and therefore how can we expect for this crime to be committed without the prior knowledge of the Saudi regime?

Observing the issue from an intelligence perspective, Unlu also underlined that the Director of the CIA, Gina Haspel, came to Turkey in order to see what evidence the Turkish authorities have. He also added that there are some background reports that state Haspel listened to the recording of the murder.

Finally touching upon the future of Saudi Arabia-US relations, Unlu stated how “Although Trump will not cancel arms trade deals, he has to accept that this was an infringement on human rights and therefore, we can expect changes in relations between the two countries.”

Huseyin Alptekin, a Professor of International Relations at Istanbul Sehir University tried to answer the following questions: “Why Turkey? Why now? Why Khashoggi? Why Saudi Arabia?”

In regards to the “why Turkey?” question, Alptekin highlighted that although relations between Turkey and Saudi Arabia were not in crisis mode, they had deteriorated in the previous years due to certain disagreements between the two countries.

“The Middle East is not a number one priority for the U.S. anymore,” stated Alptekin, and therefore, Mohammed bin Salman and Saudi Arabia tried to take advantage of this space in regional politics.

Alptekin described MbS as someone “that needs to prove himself.” “Those before him didn’t have to prove themselves, because they already had this. However, the way MbS came to power was through some kind of coup. Let’s remember the Ritz Carlton event.”

Thus, Alptekin described MbS as having “power” but no “legitimacy.”

In general however, Alptekin observed the Jamal Khashoggi case as a “critical juncture.”

He stated that “although critical junctures do not tell us what happen next, they tell us that anything can happen.”

In this regard, Turkey’s stance on the Khashoggi case is an example of Ankara trying to expand its boundaries of what can happen. The Turkish government could have made deals with the Saudi and U.S. governments behind closed doors. However, it has displayed a consistent tactic and has been able to place this issue as number one on the international agenda.

Alptekin finished his words by stating that “Saudi Arabia will not be able to commit such an operation like this in Turkey again.”