Having come to Brussels for a conference organized by far-right groups in a way reminiscent of the wolf disguised as the grandmother of the little red riding hood, Bannon tweeted: “To run a country I would rather have 100 yellow vests than 100 Goldman Sachs officials.” 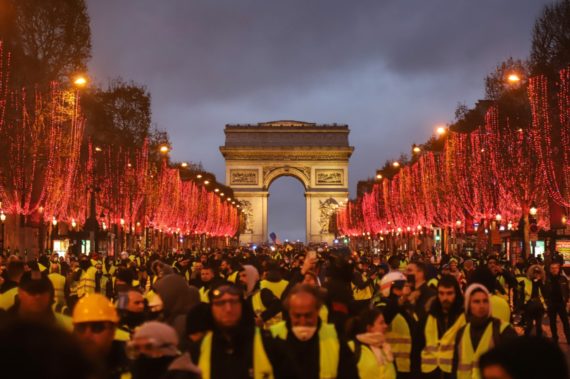 Arc de Triomphe during the Yellow Vest demonstration with strong police force. Clashes and vandalism which have resulted in thousands of arrests, including more than 1,700 on Saturday 8 December 2018, spring from the Yellow Vests protests, an anti-government movement. Getty Images

Having received 34.9 percent of the vote share in the second round of the latest French presidential elections and by doubling the rate of support her father enjoyed 15 years ago, Marine Le Pen broke a record in the history of the French far-right. However, what was highlighted in the election period was the victory of Emmanuel Macron, who was elected as the new president of France by defeating center right, center left and far-right parties. Time Magazine featured Macron on its front cover as “The Next Leader of Europe.” In a tweet he wrote in French, the European Commission President Jean-Claude Juncker congratulated Macron by saying: “Happy that the French have chosen a European future. Together for a stronger and fairer Europe.”

A research shows that the fortunes of the richest 500 business people in France increased by %13 during 2018 by increasing three times over the past decade.

Being the finance minister of the socialist president, François Hollande’s cabinet, and a former employee of a long-established and renowned Rothschild Investment Bank, Macron resigned and founded his party, namely “La République En Marche!” becoming the youngest president in French history at the age 39. He was promising for quite a bit and achieved a parliamentary majority. However, although the course of events had already reversed their direction, the situation became visible only a year after En Marche came to power.

Hollande, who went down in history as a terribly ineffective president, impressed all the Frenchmen for the first time when he nicknamed Macron as the president of the richest. In the meantime, a research published by the French weekly Challenges showed that the fortunes of the richest 500 business people in the country increased by 13 percent during 2018 compared to the previous year and reached 650 billion Euros in sum by increasing three times over the past decade. The research also indicated that the number of billionaires making the list of the wealthiest people exceeded 100 for the first time.

Although it seems at first sight that the protests broke out because of the rises in diesel fuel prices, the Yellow Vests received the support of %80 of the French population since its outbreak and staged four big protests that witnessed serious cases of violence, which led to severe casualties.

On October 18, in the Brittany region of France, a woman named Jacline Mouraud asked: “Where are we going to? What do you do with the money you are taking from us?” Mouraud criticized the price rises and published a video message that finished with “Enough!” The video went viral, shared by more than 6 million people on social networks. On November 17, a truck driver named Eric Drouet called people to protest by saying that “let’s block France.”

Now, there is no need to ask how they ended up organizing since the experiences around the world so far have already proven that it is now very easy to do that with present means of communication. Although it seems at first sight that the protests broke out because of the rises in diesel fuel prices, the Yellow Vests received the support of 80 percent of the French population since the outbreak of the events and staged four big protests that witnessed serious cases of violence, which led to severe casualties. While 4.099 people have been detained, four were killed and hundreds were injured during the incidents.

Although the demands of the French embodied in the Yellow Vest uprising were not answered, it cannot be said that Macron and the government remained unresponsive for three weeks. For instance, while the protests were ongoing, Macron said: “The perpetrators of this violence do not want change, they want chaos. They will be identified and put on trial.” According to French Interior Minister Christophe Castaner, the protests “created a monster.” Foreign Minister Jean Yves Le Drian stated that he understood how fragile democracy is when he heard about some uprising calls following the protests ongoing for three weeks, adding that all these jeopardize institutions and means of coexistence. Economy Minister Bruno Le Maire stated that the violence means a catastrophe for the economy and added that this is a national and social crisis of democracy. Although their justifications look different, the situation is the same for the Yellow Vests and the majority siding with them – although they did not take to the streets. What has been observed in developed countries since the 2008 crisis is a social and national crisis of democracy.

Eventually, after the fourth violent protest and prior to the fifth one, President Macron addressed the public, saying: “I take my share of responsibility. I might have hurt people with my words.” Then he announced some relief measures, which include eliminating social security tax in pensions for retirees earning less than 2.000 euros a month, and the minimum wage in France, which is around 1.200 euros, will be raised by 100 euros beginning in 2019 without setting any burden on employers. His statement on the raise in minimum wage caused some confusion, upon which journalists inquired the Elysee Palace. In fact, as required by law, the government already has to raise the minimum wage by 20 euros at the beginning of 2019. The remaining 80 euros was projected to be provided with the state’s renunciation of some social cuts. However, Macron refused one of the leading demands of the Yellow Vests, reinstating a tax on the wealthy, which he ruled out during his first term in office.

Macron seems to have lost 15 points in support, including the votes of his own supporters over the past two months, whereas far-right Le Pen and far-left Melenchon are on a slight rise.

All in all, Macron came to be known as the president of the wealthy and the finance groups. Two different surveys conducted after his announcement show that Macron could not convince 59 percent of the French public. Also, he seems to have lost 15 points in support, including the votes of his own supporters over the past two months, whereas far-right Le Pen and far-left Melenchon are on a slight rise. This aspect of the story can be summed up in the best way with the tweet written by Steve Bannon, a former Goldman Sachs banker who was an advisor to Donald Trump. Having come to Brussels for a conference organized by far-right groups in a way reminiscent of the wolf disguised as the grandmother of the little red riding hood, Bannon tweeted: “To run a country I would rather have 100 yellow vests than 100 Goldman Sachs officials.”