In recent years, scholars have tried to apply the post-Islamism theory to different cases, specifically the contexts where political Islam has been active in the past decades. 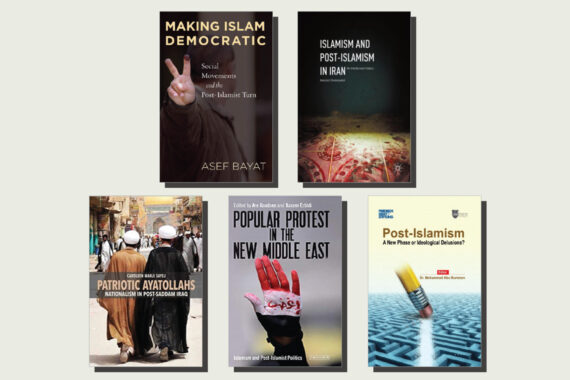 Asef Bayat’s Making Islam Democratic: Social Movements and the Post-Islamist Turn (Stanford University Press, 2007), an essential read for anyone interested in post-Islamism, is extensively referenced in works on the subject. Book cover.

According to Bayat, Islamic political movements experience certain phases. The first phase is the experimentation, in which the movement gains power. Then, they face the paradoxes of being in power in addition to failure to realize their promises. In the end, the appeal, energy, symbols, and sources of legitimacy of political Islamism evaporate.

In recent years, scholars have tried to apply the post-Islamism theory to different cases, specifically the contexts where political Islam has been active in the past decades. Yadullah Shahibzadeh is among those who have followed political Islam in Iran. In his book Islamism and Post-Islamism in Iran: An Intellectual History, he explains the crisis of political leadership in post-1979 revolution Iran.

By detecting “Islamist totalism” in Iranian politics, he follows the career of Islamists in power. He discusses the challenges they faced with democracy, and the challenges with Islamist and non-Islamist reformists in their effort to guarantee democracy in Iran. Shedding light on Iranian political and intellectual history after the 1979 revolution, Shahibzadeh focuses on Iranian Muslim intellectuals and their understanding of politics and democracy in reference to their religious background and religiosity.

He argues that by providing a large amount of epistemological, ethical, and political insights to society, Iranian Muslim intellectuals have contributed to the transformation of Iranian Islamism into post-Islamism. Therefore, the past, solid Islamic ideology in terms of its avid eagerness to preserve political power and dominance has been enormously weakened and delegitimized.

In Islamism and Post-Islamism in Iran: An Intellectual History, Yadullah Shahibzadeh (Palgrave Macmillan, 2016) provides a history of the transformation of Islamism into post-Islamism in post-1979 Iran. Book cover.

Although the discussions on post-Islamism were more concerned with Iran, Egypt, and Turkey, after the downfall of the Baathist regime, Iraq also entered the current scholarship on post-Islamism. In Patriotic Ayatollahs: Nationalism in Post-Saddam Iraq, Caroleen Sayej has followed the attitudes of Islamist parties and activists in post-2003 Iraq and has provided a deep analysis of senior Iraqi clerics in the Iraqi political sphere.

Sayej focuses on Shiite clerics’ pronouncements and fatwas on political issues, and narrates their ideas and ideals on contested issues such as democracy. In Patriotic Ayatollahs, she narrates the most important Shiite religious scholars and their followers’ positions. For her, they have selected a progressive and secular approach in post-2003 Iraq. The case becomes more critical as most Shiite politicians and political leaders lived in Iran for years and were influenced by the theory of the “Guardianship of the Islamic Jurist” which is currently prevalent in Iran.

In other words, the Iranian experience has pushed the Iraqi Shiite religious scholars toward a post-Islamist inclination in Iraqi politics. Sayej’s main contributions to the issues of post-Islamism in this work are, first, her reference to the role of high-ranking religious leaders in insisting on the necessity of democracy and its legitimacy over any Islamic theocracy; and second, the vital role that nationalism plays in the political thinking and behavior of an Arab Muslim nation in the Middle East amidst sectarian temptations and tendencies.

In other words, the importance of Sayej’s work lies in the fact that she illustrates a path in which a transnational Shiite movement has been replaced by a local endeavor to guarantee a democratic system and to reinterpret Islamism in a way that deals with personal and communal piety and not with structural-political issues.

Are Knudsen and Basem Ezbidi have edited several articles and published them in a volume called Popular Protest in the New Middle East: Islamism and Post-Islamist Politics. The editors have considered a group of political uprisings in different parts of the Middle East, known generally as the “Arab Spring,” whose immediate outcome was overthrowing decades-long political regimes and substituting them with unstable states.

More than any other place, in post-Mubarak Egypt and post-Ben Ali Tunisia, Islamist political movements have gained power: the Freedom and Justice Party and the Ennahda Movement, respectively. In addition to a foreword by Asef Bayat, the authors have provided insightful analyses of Islamist and post-Islamist trends in Tunisia, Egypt, Yemen, and Turkey.

Last but not least in this grouping is a selection of articles edited by Mohammed Abu Rumman and published under the title Post-Islamism: A New Phase or Ideological Delusions? It discusses the main problems of post-Islamism as a term and concept. To put it concisely, the authors believe that although post-Islamism is controversial, they have decided to use it “in the absence of a more fitting label.”

Drawing on the experience of the Arab Revolutions, the authors ascertain that the revolutionaries failed to achieve certain of the classical goals of political Islam such as the Islamic state due to ideological delusions and sociological realities. The authors refer to the transformations of Islamists’ experiences in countries such as Iran, Iraq, Indonesia, and Jordan, and try to read the changes in different countries of the Middle East.

Published in 2018 and appearing later than the other works on post-Islamism, Post-Islamism: A New Phase or Ideological Delusions? draws on a range of theories and past discussions of the term. In each article, authors have used, challenged, and developed the theory of post-Islamism, based on its rich literature, and have contributed to this discussion by direct reference to different Muslim countries.

Caption: Post-Islamism: A New Phase or Ideological Delusions? edited by Mohammed Abu Rumman, (Friedrich-Ebert-Stiftung Jordan & Iraq, 2018) considers the issue of post-Islamism both as a theory and as it has been experienced in different countries of the Middle East in the past decade. Book cover.

Post-Islamism is a hotly debated concept in the humanities and social sciences, especially in the disciplines of sociology and political science. Scholars have contributed to the field and have elaborated on the concept since Asef Bayat coined it in an essay published in 1996. More than anybody else, Bayat has been an influential figure in this intellectual debate. By post-Islamism, Bayat refers to a tendency amongst Muslim elites and activists towards re-secularizing Islam after the diminishing of political Islam in terms of non-violent political interest groups in different parts of the Muslim world.

After publishing a number of articles on post-Islamism, Bayat elaborated the notion in his book Making Islam Democratic: Social Movements and the Post-Islamist Turn (2007) and continued his discussions on the term in his subsequent books, including Post-Islamism: The Changing Faces of Political Islam (2013). In Making Islam Democratic, Bayat distances himself from a perspective that strives to find principles of democracy in the essence of any religion, including Islam. According to Bayat, the situation of each Muslim society and the benefits that societies receive from democracy is the main cause of making religions, here Islam, democratic.

For him, the dichotomy or conceiving a solid relationship between Islam and democracy, although charming, is an irrelevant quest. He traces social movements, Islamist activism, and sociopolitical changes in Middle Eastern countries, especially Iran and Egypt. He also focuses on the fate of some Islamist interest groups in power that appeared as reform projects and discusses the fragmentation of their belief in solving societal problems with Islamic tenets.

Museum Diplomacy in the Digital Age

Man of Contradictions: Joko Widodo and the Struggle to Remake Indonesia