Projections for Sunday's Elections in Turkey

Many would bet for a victory for Erdogan but with a divided parliament, which will make politics quite hot for the following months in terms of the relations between the executive and legislative branches. 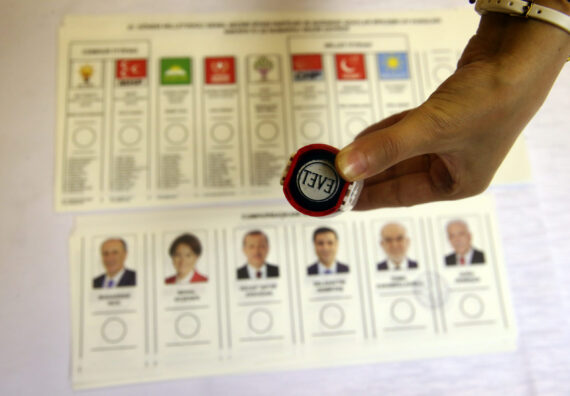 Ballot papers and a seal are seen as six steps of voting process are practical explained at chairmanship building of Supreme Electoral Council of Turkey (YSK) ahead of the Turkish presidential and parliamentary elections on June 24, in Ankara, Turkey on June 21, 2018. Anadolu Agency

Another novelty for this election are the pre-electoral coalitions. We will see two such coalitions and three individually running parties in the ballot for the parliamentary elections. As for the presidential elections, there will be six candidates.

For the parliamentary elections, we see two pre-electoral coalitions. The first is the People’s Alliance (Cumhur Ittifaki) of the ruling AK Party and the Nationalist Movement Party (MHP). Ideologically, the former is a socially conservative, economically liberal, politically reformist party. The latter is known to be an ultra-nationalist party. The MHP will not run for the presidential elections and will support the AK Party’s candidate Erdogan. Another minor ultranationalist party, the Great Union Party (BBP) is also a part of the bloc but its banner will not appear on the ballot. Interestingly, Erdogan also has the support of another nationalist party, but this time a Kurdish nationalist one. The Free Cause Party (HÜDA-PAR) is not a part of the Cumhur Ittifaki but has declared that it will support Erdogan for the presidential elections.

On the other side, we see the Nation Alliance (Millet Ittifaki) of the center-left Republican People’s Party (CHP), ultranationalist Good Party (IP), and the Felicity Party (SP) as a moderate Islamist party. All three parties, nevertheless, will run separately for the presidential elections. The minor center-right Democratic Party is also part of the bloc but will not appear on the ballots with its banner.

Besides these pre-electoral coalitions, HÜDA-PAR, the Peoples’ Democratic Party (HDP), and Patriotic Party (VP) will also separately run for the parliamentary elections and the latter two will also compete in the presidential elections with their own candidates.

What makes the elections difficult is not necessarily the number of parties running in it but its novelties. The alliances make the electoral threshold irrelevant for smaller parties such as the MHP, IP and SP. Many SP supporters did not vote for the SP in earlier elections because their votes would be wasted with no chance of the SP passing the threshold. Now the party is free of this constraint and we can see its true potential. Further, this election will be the IP’s first test on the ballot, which also makes it hard to predict its votes. Since the IP has split from the MHP and we don’t know how big a slice it took with it, we also do not know the MHP’s current vote share.

As a further complication, it is also difficult to predict the HDP’s votes because a number of CHP voters on social media declared that they will vote for the HDP in the parliamentary elections. They call it strategic voting. This way, these voters want to push the HDP over the 10 percent electoral threshold. The logic is simple. Since the HDP and AK party are the only effective parties in the heavily Kurdish populated eastern and southeastern Turkish constituencies, HDP’s absence in parliament will give the AK Party at least 60 extra seats. Such CHP voters would rather see those seats occupied by HDP MPs.

Besides all these novelties and uncertainties, it is hard to predict the results of Sunday’s elections. Nevertheless, pretty much all public polls and the general expectation in the public opinion have an overwhelming consensus on some points. For one, nobody expects a change in the order of the parties compared to the previous parliamentary elections. This is true at least for the top two. The Turkish public is pretty sure that the AK Party will top the elections, followed by the CHP.

The third party will not be the MHP this time. Although the party received around half a million more votes than the HDP in  the November 2015 elections, the IP’s split from the MHP is likely to place the HDP in the third spot. While many can easily name the top three parties in the post-election parliament in order, we do not know whether the AK Party can have the majority in parliament. With the existence of pre-electoral coalitions, we will have a higher number of parties in parliament. In such a scenario, the only way for the AK Party to hold the majority is if the HDP does not pass the 10 percent threshold.

Hence, polls show that the AK Party will come first in both ballots but what we do not know whether it can hold the majority in parliament and whether it can get 50%+1 votes in order to win the presidential elections in the first round. Many would bet for a victory for Erdogan (after all, he has quite a reputation for winning elections) but with a divided parliament, which will make politics quite hot for the following months in terms of the relations between the executive and legislative branches.