It can be predicted that Jordan will have to face more serious challenges in the coming period. Its economic problems will continue to exist as the country needs external support, the new political setting in the region will put more pressure on King Abdullah’s regime. As the region will focus more on the Palestinian issue, it will also bring Jordan on the spotlight in regional politics. 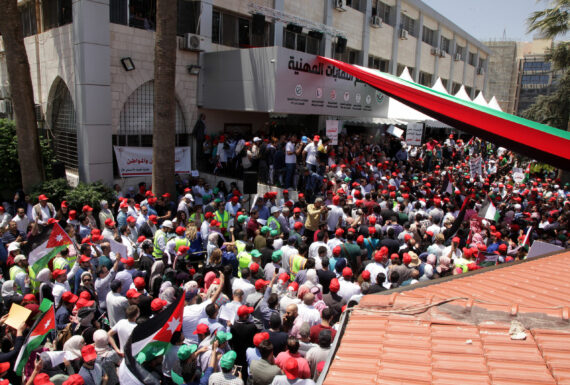 Hundreds of Jordanians gather to protest against a controversial income tax bill, amid chants for dissolving parliament in Amman, Jordan on June 06, 2018. Anadolu Agency

Jordan had experienced minimum level of protests during the Arab uprisings that started in late 2010. The regime of King Abdullah had utilized strategies that allowed him to keep his regime alive despite the regional turmoil. In the early days of 2011 protests, the main allies of King Abdullah were the Hashemite and Christian communities in the country. Strong support from powerful elites of these communities caused marginalization of protesters. As a result, civilians who went to the streets for protests lost their popular and intellectual support. In the following period, it was not a difficult task for the security forces to disperse the protesters. At the political stage, King Abdullah removed the cabinet and implemented a number of reforms to appease protesters.

However, the following years witnessed the continuation of chronic problems in the country. Human rights issues remained source of discomfort for the public, and problems regarding political participation, civil society, and freedom of expression have continued. The reform requests in these fields were not met by the regime.

The economy was another source of disappointment for the public in Jordan. While unemployment has reached 18%, the country’s debt currently represents 96% of its GDP. Decreasing foreign aid has recently forced the Jordanian government to ask the International Monetary Union (IMF) for fresh credit. Following the agreement in 2016, the IMF requested a number of reforms from the government. As part of these reforms, Amman has recently decided to increase income tax and raised prices in a number of products such as oil and electricity by 5.5 % and 19 %.

The downturn of the economy, discontent of the poor and the government’s austerity measures have forced Jordanians to protest against the bad management of the economy. On May 2018, thousands of protesters went to the streets in the capital Amman and other cities to protest the economic conditions in the country. Mainly syndicates and labour unions in many sectors organized the protests. In the following days, there were calls for a general strike in which thousands of professionals such as doctors, dentists, bankers and journalists participated. Following the demonstrations and strikes, King Abdullah took Prime Minister Hani al-Mulki from office and appointed Omar Al-Razzaz, who was Minister of Education and had previously worked in the World Bank. Despite the government reshuffle, the protesters seemed determined to continue until their demands were fully met.

The protests in Jordan are another disturbance for the King Abdullah leadership, who is also experiencing problems in foreign policy. Despite the conflicts in neighboring regions such as Syria, Iraq and Palestine, Jordan is known for its relatively stable political and economic structure. However, particularly during the past year, King Abdullah has been facing challenges with regards to its relations with traditional allies. Jordan’s hesitance in joining the Saudi-led political campaign against Qatar caused disappointment for Riyadh. Jordan has also hinted that it can have better relations with Iran and may develop a strategic partnership with Turkey.

Another reason for the tension between Jordan and Saudi Arabia is the Palestine issue. While Saudi Arabia, the United States and Israel have been joining their efforts and perspectives in dealing with the crisis, Jordan chose not to stay on the table anymore. Around two thirds of Jordan’s population is of Palestinian origin, and there are thousands of Palestinian refugees living in the country. This makes Jordanian population as a natural supporter for the Palestinian cause. Therefore, it is almost impossible for the King Abdullah leadership to join the Saudi-U.S.-Israel alliance. For this reason, Muhammad bin Salman, the de facto leader of Saudi Arabia, now considers Jordan as a burden.

King Abdullah’s response to young crown prince in Saudi Arabia came in the last days of 2017, with the decision of removing his two brothers and one cousin from the important ranks in the Jordanian security establishment. The reason for this decision was a Saudi initiated coup attempt in which two brothers and a cousin of King Abdullah would be involved. This development has been one of the turning points in Saudi Arabia and Jordanian relations.

Considering the recent developments, it can be predicted that Jordan will have to face more serious challenges in the coming period. Its economic problems will continue to exist as the country needs external support, the new political setting in the region will put more pressure on King Abdullah’s regime. As the region will focus more on the Palestinian issue, it will also bring Jordan on the spotlight in regional politics.