Turkey is set to buy the S-400 missile defense system from Russia as President Recep Tayyip Erdogan, while meeting his Russian counterpart Vladimir Putin in Ankara on Monday, announced that the deal would be finalized “this week.” 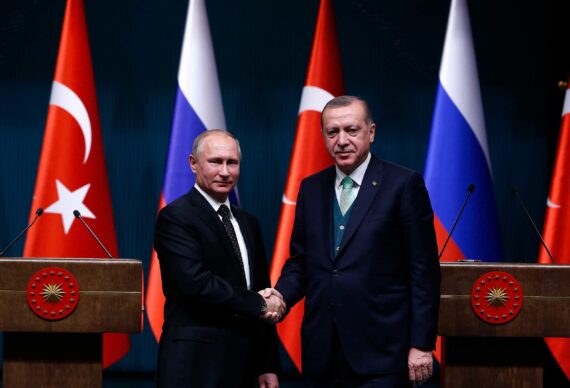 Russian President Vladimir Putin and President of Turkey Recep Tayyip Erdogan hold a press conference after their meeting at the Presidential Complex in Ankara, Turkey, on December 11, 2017. Anadolu Agency

Turkey is set to buy the S-400 missile defense system from Russia as President Recep Tayyip Erdogan, while meeting his Russian counterpart Vladimir Putin in Ankara on Monday, announced that the deal would be finalized “this week.”

The S-400 deal between Russia and Turkey has reached close to its success after a more than year of negotiations.

“Our colleagues will come together this week to conclude the work,” Erdogan said.

The news of negotiation between Russia and Turkey had raised speculation in the West as Turkey is a core partner of the Western military alliance NATO. However, the Turkish government seemed determined to buy the missile system from NATO’s main rival due to Turkey’s fear of the West’s duel role in the Syrian war, indifference to last year’s failed coup attempt and its antagonist approach to the country.

The S-400 is a modern-day long range missile system that is capable of carrying three types of missiles which can destroy targets including ballistic and cruise missiles. The system can track and engage up to 300 targets at a time and has an altitude ceiling of 27 kilometers (17 miles).

The two presidents also discussed bilateral trade relations and both expressed the hope and desire to keep the relations going.

Erdogan said, “Our bilateral trade volume with Russia increased 30 percent as of the first 10 months of 2017. We have a harmonious working environment at the political level.”

Russian president Vladimir Putin told that obstacles to trade and economic ties had been removed. “Within the first eight months of this year Turkish agricultural exports to Russia increased by 1.8 percent,” he said.

Relations between the two countries had entered a crisis after Turkey shot down a Russian jet over the Turkish-Syrian border in late 2015. Russia immediately imposed sanctions on Turkey, which mainly targeted the tourism sector, as Russian tourists form a major number of tourists in Turkey — about three million per year.

Putin on Monday made a surprising visit to war-torn Syria, ordering his troops to prepare withdrawing from the country as Syria, according to the president, had been cleared of the terrorists. The commander of the Russian forces in Syria, Colonel General Sergei Surovikin, said that Russia will withdraw its 23 combat aircrafts, two helicopters, special force units, military police, and area security personnel from Syria.

Russia intervened in the Syrian war militarily in September 2015 after receiving an official request from the Assad regime. Putin met with Bashar al-Assad at Khmeimim Air Base, southeast of Latakia, on Monday.

Media reports since 2015 have suggested that Russia was sending all its high-tech and advanced weaponry including T-90 tanks (first post-Soviet tank) and Sukhoi jets to usher the Syrian government – that along with its rivals have killed more than 350,000 Syrians. The battle tank, which the US media had reported reached Syria’s Latakia air base in 2015, is equipped with a 125mm tank gun and an anti-aircraft machine gun. The weaponry that remains in Syria is going to be a concern for neighboring countries, most importantly Turkey.

Amid the warming relations between Turkey and Russia that have high stakes connected to the stabilization in Syria, Turkey has high hopes to acquire Russian assent for the operation in the Afrin province of Syria. Afrin is the hub of YPG/PKK terror groups and Turkey is bent on preventing them just like Daesh.

Criticizing US move on Jerusalem

Amid the rising fury throughout the Muslim world, Erdogan and Putin also spoke against US president Donald Trump’s decision to recognize Jerusalem as the capital of Israel. The Russian president stated that the status of Jerusalem should be settled through direct talks between Palestinians and Israel.

While speaking at the press conference he said, “Both Russia and Turkey think the decision of the US to recognize Jerusalem as the capital of Israel is not helping the situation in the Middle East. It is destabilizing the region and wiping out the prospect of peace.”

US reacts to Russian announcement

Meanwhile, the US has dismissed the Russian claim and at the same time feigned indifference at the Russian announcement of troop withdrawal from Syria. A Pentagon statement on Monday claimed that Russian statements on the withdrawal of its forces from Syria “do not typically correspond” with the situation on the ground.

In a press statement Pentagon spokesperson Military Col. Rob Manning said, “Russia’s comments do not impact US priorities in Syria.”