There are only rumors about the new duties of the out-going chairs Salih Muslim and Asya Abdullah, who have transferred their duties to Shahoz Hasan and Aisha Heso. It is considered highly likely that both figures will be appointed to future roles on an international level. 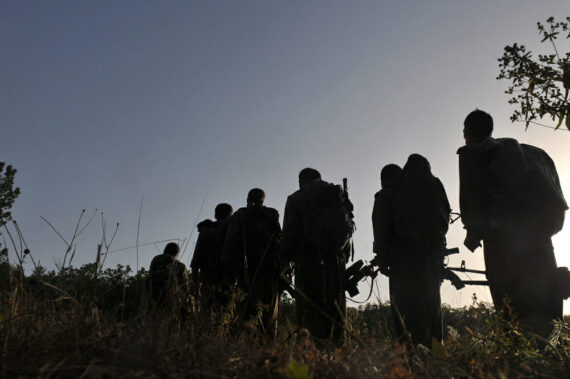 Immediately after the independence referendum held in northern Iraq, the PYD conveyed a congress on September 27-28, 2017. This event, known as the 7th General Congress, was held in Rmelan. As was the case in previous PYD congresses, once again the name of the PKK/KCK leader Abdullah Öcalan was on the front line. It is known that the repressive-propagating methods of the PYD, including its establishment in northern Syria, is being directly coordinated and directed by Öcalan and the leadership in the Qandil mountains. During this two-day congress, co-chairs Salih Muslim and Asya Abdullah were replaced by Shahoz Hasan and Aisha Heso. As it can be observed from the organizational structure of the PYD and the mechanisms within this structure, the elections are determined solely by the representatives and the nominees who are appointed by the upper leadership bodies.

To briefly explain how tasks are distributed within structures of the PYD and how new task distributions occur, the following information will be useful. According to their own by-law that was published by the PYD, there are five main organs in the organization. While according to an established hierarchy the chairman is in third place of authority, above the party chairmanship, congress is declared as the supreme decision-making body. When the by-law is examined, it can be understood that the congress also dominates all levels of the organization. While according to the by-law, congress should be convened every three years, this rule has been infringed according to individual needs and interests. The most important tasks of the Congress are the determination of party chairpersons, the formation of parliament and the determination of those who will enter this parliament and the prescription of their duties. Looking at the establishment of the PYD organization, it does not hesitate to move directly in line with the directives of the KCK main leadership structures. As a matter of fact, the most recent congress has shown this in terms of its content and purpose.

As is the case with all other leading members of the PYD, the two newly appointed co-chairs appear to have been previously occupying various posts under the KCK structure. Although the 7th congress has not attracted much attention except from the people working in this area, the two selected leaders presented themselves on the international and regional level by attending the funeral ceremony of former Iraqi Kurdistan Patriotic Union (PUK) leader Jalal Talabani. The ideological approaches of the new co-chairs, who also met Masoud Barzani during Talabani’s funeral, can be evaluated by both the congress and the activities they were enduring previously when serving in the ranks of the KCK.

The following information about the two newly appointed co-chairpersons could be identified: Shahoz Ahmad Hasan, who filled Salih Muslim’s seat, was originally born in Hasakah. Hasan, who was known to have taken part in military activities in the Qandil Mountains until 2011, was assigned to continue his activities in northern Syria the same year. One of the first public works after his Qandil years was published on the PKK’s website. Shahoz Hasan wrote an article called “The Spring of the Peoples,” in which, praising the terrorist leader Abdullah Öcalan, he argued that the post-Cold War capitalist and imperialist system is going to collapse and that the imperialists are continuously going to lose in Iraq and Afghanistan. At the same time, there is no doubt that Hasan accepts Öcalan’s thoughts and ideas as the most important source of inspiration for the region’s future. Abdullah Öcalan, who is described as “the natural leader of all the Kurdish peoples,” also appears to be identified as a “source for the victories of the people of the whole region.”

After being sent to northern Syria by the Qandil leadership, Hasan began actively working in the PYD from 2013. While firstly being appointed to the leadership board of the city of Ayn al-Arab, which was under PYD control, he was then appointed as media officer of the Movement for a Democratic Society (TEV-DEM), which was later imposed by the PYD as an administrative element to govern northern Syria in the early periods of the crisis. Later, he became a member of the Syrian Democratic Council, which is the political wing of the Syrian Democratic Forces and established at the end of 2015 to help PYD’s military wing YPG through gaining support from Western countries, especially the U.S. Meanwhile, Hasan also received membership at the “Founding Assembly of Democratic Federalism of North Syria” whose co-chairperson is Hediya Yousef. From his listed experiences, it can be assessed that Shahoz Hasan has focused particularly on media issues throughout his experience in Syria. Within these various processes, Hasan, who as stated earlier, has publications praising PKK leader Öcalan, was no doubt a prominent figure in carrying out activities in order to disseminate the PKK/KCK ideology.

This old picture shows the PKK leader Abdullah Öcalan and Shahoz Hasan side by side.

The other co-chair, Aisha Heso, draws a more unfamiliar portrait than Shahoz Hasan. Heso, a close associate with the Qandil cadre, was born in Afrin. It is believed that a relative with the same name as herself was killed during a clash with the Turkish Armed Forces in the Zap region of Iraq while fighting in the PKK ranks at the beginning of the 1990s. Prior to her role as co-chair of the PYD, Aisha Heso was a member of TEV-DEM’s high leading board, and head of its women’s structure. More, she had also previously served under the directives of the KCK and worked for “Yekitiya Star” (Star Women’s Union), which was established within Abdullah Öcalan’s ideological framework “gineology.” Yekitiya Star changed its name to “Star Congress” (shortly Star, Star Women Congress) with the outbreak of the Syrian civil war. Heso, who was appointed as the coordinator of this structure, is known to have protested against the lack of PYD representation in the Astana negotiations. Heso made some statements concerning the arrests of the People’s Democratic Party (HDP) deputies in Turkey. When making these statements, she was interestingly interviewed as a normal citizen, with her real identity and role kept in secrecy. Lastly, in July 2017, she made multiple comments about Turkey’s possible military actions in Afrin.

Thus, the two names that have been determined by Qandil for the leadership of the PYD – Shahoz Hasan and Aisha Heso – are merely puppet leaders. As the steps taken by the PYD clearly illustrate, the terrorist organization has never stepped out of KCK directives and it will never do so. While currently there are only rumors about the new duties of the out-going chairs Salih Muslim and Asya Abdullah, who have transferred their duties to Shahoz Hasan and Aisha Heso, it is considered highly likely that both figures will be appointed to future roles on an international level.