When names in the new cabinet are examined, it is seen that the main trigger behind its formation is expertise with bureaucratic and technical knowledge. Almost all names in the cabinet have significant experience in working areas of their ministries. 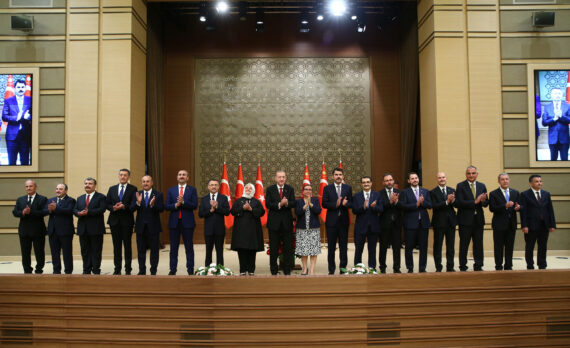 Turkey’s new cabinet was formed on Monday. After President Erdogan’s inauguration ceremony in the Parliament and Presidential Complex, Turkey’s new cabinet was announced by the President himself. President Erdogan also proclaimed the first vice president of Turkey, Fuat Oktay – coming from the bureaucracy. This cabinet was formed in accordance with the requirements of the presidential system, which began to be implemented after the elections. As part of the new state structure, some ministries were combined and the total number of ministries decreased to 16. Indeed, the ministries were combined to increase the efficiency of the state structure and bureaucracy under the new presidential system.

When names in the new cabinet are examined, it is seen that the main trigger behind its formation is expertise with bureaucratic and technical knowledge. Almost all names in the cabinet have significant experience in working areas of their ministries. It is also striking to see that President Erdogan paid attention to make a balance among the business world, bureaucracy, politics, and NGOs. Some names such as Ruhsar Pekcan (Minister of Commerce), Fahrettin Koca (Minister of Health), and Mehmet Ersoy (Minister of Culture and Tourism) have successful business careers in their area of expertise. Additionally, some ministers such as Mehmet Cahit Turan (Minister of Transport and Infrastructure) and Fatih Donmez (Minister of Energy and Natural Resources) are from the bureaucracy. The most surprising name in the cabinet is Hulusi Akar, who has been appointed to the Ministry of National Defense while serving as the Chief of General Staff of Turkey.

The withdrawal of the prime ministry and the transformation of the cabinet are expected to bring new issues to the forefront such as efficiency, accelerated decision-making, transparency, and bureaucratic rationality in administrative bodies. Additionally, the function of presidential boards will increase the importance of advisorship and expertise in administration.

The previous system was lacking in providing efficiency and accelerated decision making processes among state institutions. It was even quite difficult to see the flow of information and interaction between state agencies. One of the reasons of this problem is ambiguity between policy formation and implementation in state bodies. Nonetheless, the new system foresees a clear-cut differentiation between them.

Newly-established nine presidential boards will develop strategies in crucial areas such as local government, energy, social policy, education, economy, health, culture, technology, and innovation. Thus, policy formulation will be the responsibility of these boards while ministries will charge in policy implementation much more than before.

Nevertheless, the relationship between state agencies matters in the new system. It was designed to form efficient communication dependent on bureaucratic rationality. It should be reminded that one of the reasons of the development in Korea was the existence of bureaucratic rationality provided by planning boards in the system after the 1960s. Centralized policy-making under these boards also accelerated policy implementation.

The transformation of bureaucracy under the new system is anticipated also to bring cohesiveness between ministries. Ministries will be in more interaction and resilience of the bureaucracy will be lessened due to increasing demand in expertise.