Russia in Ukraine: Is There a Risk of Nuclear “Armageddon”?

All nuclear-armed states continue to modernize their remaining nuclear forces at a significant pace. 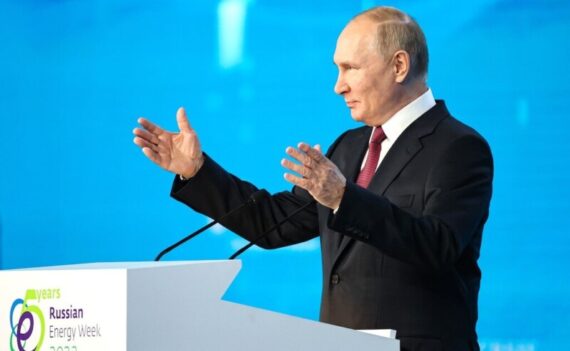 n October 6, U.S. President Joe Biden said the risk of nuclear “Armageddon” was at its highest level since the Cuban Missile Crisis. Biden said Russian President Vladimir Putin was a guy he knew fairly well, and that Putin was “not joking when he talks about the use of tactical nuclear weapons or biological or chemical weapons.”

Lately Russia has been suffering major setbacks and losing strategic cities in Ukraine. Putin has repeatedly suggested using nuclear weapons if the “territorial integrity of our country is threatened.” The frequency of such rhetoric is escalating as the Russian army suffers major disappointments.

Joe Biden added that the threat from Vladimir Putin may be serious because the Russian military seemed to be “significantly underperforming.”

Three days after Russia began the military invasion of Ukraine on February 24, Putin ordered the placement of Russian nuclear forces on high alert.

Russia drew criticism from many world leaders when Putin threatened to use nuclear weapons to defend annexed territories during the week of the annual UN General Assembly Meeting.

“This is not a bluff… those who try to blackmail us with nuclear weapons should know that the wind vane can turn and point toward them,” warned Putin.

On September 30, Putin also stated that the U.S. created a “precedent” by using nuclear weapons in World War II.

According to the Russian nuclear doctrine, Russia considers nuclear weapons as a deterrent. They can be used if attacked by nuclear weapons or other types of weapons of mass destruction targeting the Russian territories or the territories of its allies; when the existence of the Russian state is in danger with the use of conventional weapons; or when Russian critical governmental or military sites are attacked threatening its nuclear capability.

In this context, Putin’s signing of the four federal constitutional laws annexing the regions of Donetsk, Luhansk, Zaporizhzhia, and Kherson is important because in order to “defend” these annexed regions, Putin can resort to the Russian nuclear doctrine.

Read: The Last Remaining Arms Control Treaty between the US and Russia Expires Soon

What are Russia’s nuclear capabilities?

It is difficult to know the exact number of a country’s nuclear arsenal, but under the arms control treaty New START the U.S. and Russia are required to be transparent and verifiable. However, the treaty mostly covers strategic weapons, while the number of tactical weapons is given at an estimate and may be unclear.

Russia has various kinds of tactical nuclear weapons including ones that could be used by the navy, air force, or the army, either in surface-to-surface short-range missiles or in surface-to-air air defenses.

Aircraft that have already been used in Ukraine can deliver tactical nuclear weapons designed for the air force. According to the Federation of American Scientists, Russia has around 500 such weapons.

How destructive can these weapons be?

Even the smallest warhead could cause major damage and loss of life at the moment of strike, not to mention the long-term effects of radiation. However, there are factors that determine how destructive a nuclear weapon can be: yield and the surface where the blast takes place.

Yield is what defines the power of a nuclear weapon. Modern tactical weapons have a capacity of around 10 to 100 kilotons, which makes them more destructive than the nuclear bombs used on Hiroshima and Nagasaki, which respectively had yields of 15 and 21 kilotons.

Russia possesses the most powerful nuclear bomb that has ever exploded, the Tsar Bomba with a yield of at least 50 megatons.

Where the blast occurs may have an effect on the damage; depending on the terrain or on whether it occurs underground or on the surface, the surroundings may absorb some of the blow.

The immediate impact zone would likely be annihilated, and structures that are hit by the blast wave could be destroyed up to several kilometers.

Read: Who Is Guilty of War Crimes in Ukraine?

Yes—and no: while the destruction that these weapons cause is catastrophic, and Russia seems to be playing with fire, the tactical weapons that Russia may choose to use in Ukraine need to be transported and deployed. This could take days, and in the meantime, intelligence services from other countries would likely detect such activity.

Yet, the state of the nuclear non-proliferation regime is deplorable. According to the Federation of American Scientists, nuclear-armed states retain large arsenals for the indefinite future instead of planning for nuclear disarmament. Meanwhile, all nuclear-armed states continue to modernize their remaining nuclear forces at a “significant pace,” and several are adding new types and/or increasing the role they serve in national strategy and public statements.

This includes Russia, which continues a “comprehensive” modernization program to replace most of the Soviet-era weapons and introduce new types.

Also Read
“Space Is for All”: An Interview with NASA Engineer Loay Elbasyouni