"Russia’s border doesn’t end anywhere," as Putin once jokingly said. There’s only a horizon in Russia. 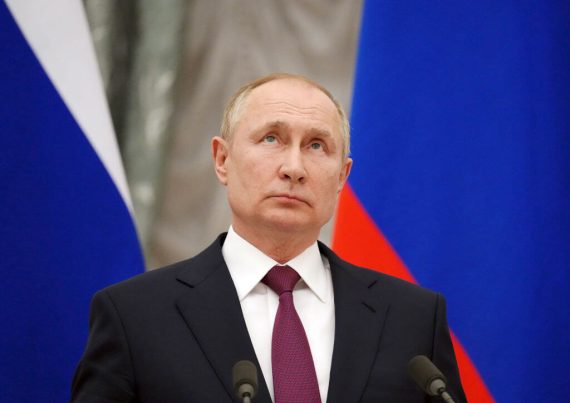 Russian President Vladimir Putin looks up at a joint press conference with German Chancellor O. Scholz (SPD) after several hours of one-on-one talks in the Kremlin on February 15, 2022 in Moscow, Russia. Photo by Kay Nietfeld, Picture Alliance via Getty Images

Vladimir Putin has crossed a line which seemed impassable for many. By launching a full-scale attack on Ukraine to revise the post-Cold War order, he has resurrected old fears in Europe and far beyond.

Are those who cannot come to terms with the past doomed to repeat its mistakes?

Many argue that Russia has always sought to satisfy its needs through conflict and by attacking others. Therefore, we should not be surprised by their full-scale military operations in a sovereign country.

Putin’s plan to restore the imperial power of Russia was evident as early as 2008 when he attacked Georgia.

This is because the irrationality here is only apparent. Putin has most likely prepared the country for such a development by hoarding huge currency reserves and making arrangements with China for the sale of its raw materials. His calculation probably includes the annexation of some of the Ukrainian territories in the east and south, and possibly leaving Ukraine bleeding without resources and unable to lift itself up from the misery.

He aims to recreate the status quo that existed before the collapse of the Soviet Union and the fact that he is achieving this by seemingly irrational methods that generate gigantic costs for Russia itself is another matter.

In the hours up to the invasion, Putin recognized the independence of the self-proclaimed People’s Republics of Donetsk and Luhansk – everything in an usurpatory attempt to redraw the map according to his own liking and to undermine the international order. These areas, governed by pro-Russian separatists, have been steadily moving closer to Moscow for a long time, and the world has sat back and watched.

Putin did not even refrain from questioning Ukraine’s existence, asserting that “Ukraine never had a tradition of genuine statehood,” and that the nation now known as Ukraine was carved out of Russia by Soviet leader Vladimir Lenin.

Putin is showing that he is prepared to go to great lengths to turn back the clock and re-subjugate Soviet Union and Warsaw Pact-era territories to Russia. For the time being, he is active in Belarus and Ukraine.

Putin’s motivations are serious, as he demonstrated back in 2005 when he stated that the “collapse of the USSR was not only the greatest geopolitical catastrophe of the 20th century but also a real drama for Russians.”

Even back then, many could not trust their ears. Is Russia really ready to stand up to America, dismantle the world order, and put humanity on the brink of war?

But now, amid the ongoing aggression, the question returns as to what Putin’s territorial appetites are. Where will his tanks stop?

Over the last few years, Putin has increasingly used the term “historical Russia,” which is precisely the “Great Russia” formed in the 18th century.

Is Russia really ready to stand up to America, dismantle the world order, and put humanity on the brink of war?

In his own words, Russia and Ukraine are united by the “same people and one faith,” where the latter refers to Eastern Orthodoxy, which he has called on many occasions the “Russian cultural code, the Russian cultural dominance.” Even though Putin claims the territory of the whole of Ukraine, his so-called historical Russia cannot include the western part of the country with the main town of Lviv. This is where the Ukrainian Greek Catholic Church has always dominated, persecuted for centuries by the Russian Orthodox Church.

Read: Macron’s Visit to Putin Underlines Just How Weak the West is Against Putin

The boundaries of Putin’s fantasies can be reconstructed – albeit with some difficulty. Some experts believe that for him the pinnacle of the development of Russian statehood was Stalin’s centralized empire, where all decisions were taken by Moscow, but appearances in the form of the national flags of the republics were retained. Putin, however, seems to want to be surrounded by vassal states like Belarus.

For many years, Belarus leader Alexander Lukashenko has systematically delayed taking any binding decisions regarding a federation with Russia. The federal state therefore has remained a theory for nearly two decades.

For many years, Belarus leader Alexander Lukashenko has systematically delayed taking any binding decisions regarding a federation with Russia.

The situation changed in 2020 when mass street protests spilled across Belarus after the rigged presidential elections. Minsk became isolated by the West and suffered under sanctions, offering the perfect opportunity for Russia to become a guarantor of the stability of Lukashenko’s grip on power.

Apart from that, Kazakhstan, Armenia, and other post-Soviet states are highly likely to complete Putin’s wish list.

A new old power base

The prospect of challenging the “American world order” must be very tempting for a former KGB officer brought up in hatred and distrust of the U.S. Is Putin sensical with this? His black-and-white vision of the world explains not only his obsession with empire but also his fears over Russia’s declining population. For on almost every occasion, Putin has repeated that there should be more inhabitants in Russia. But, where to find the right number of people in a country with rising mortality and chronic poverty?

There is one way out – at least for Putin: empire building.

Russia is not very tempting economically (the exception being the corporations draining its natural resources), and its economic integration initiatives for former Soviet states are coming apart at the seams. But Putin has many tanks that can be deployed abroad, and as Lenin taught, “War is the continuation of politics only by other means.”

In sum, an empire can be built for a variety of reasons. Some believe that Russia is doomed to expand, otherwise, it will be torn apart by an explosion from within. The accumulated social discontent, which cannot be discharged due to poor governance, must be directed towards external conquests.

In the ultimatum presented to NATO in December last year, Putin demanded the withdrawal of the alliance’s troops and the related infrastructure behind the Oder River that separates Poland from Germany. This would immediately create a “grey security zone” from the borders of Russia to the western border of Poland. This means that with a forward-looking and aggressive Russia, Putin would create his own “sphere of influence.”

“Russia’s border doesn’t end anywhere,” as Putin once jokingly said. There’s only a horizon in Russia.